Cake in a Cup 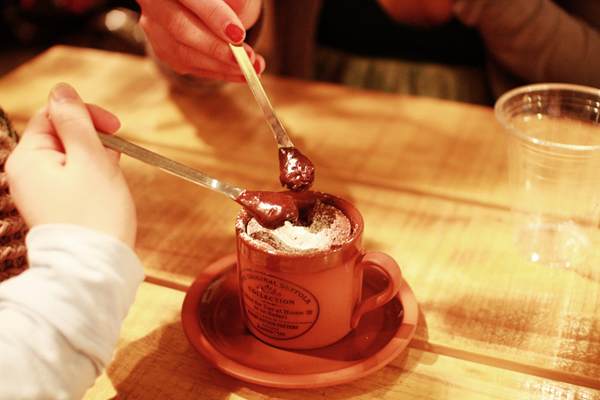 Maryjane, a locally owned little café on a side street in Wonju, looks innocent enough. It has a quaint, tiny terrace out front, glass doors that fold back to welcome spring breezes and summer sunshine, and a dreamy décor that makes having a nap after your coffee seem like the best idea you’ve had all day. But dear coffee sippers and chocolate lovers: do not be fooled. Maryjane’s menu will grab you by your taste buds and refuse to let go.

For a small town, family run joint, Maryjane has an ambitiously diverse menu, offering coffees, teas, beer, hot dogs, fried rice, and cupcakes all fresh from their kitchen. And although I could probably jot down a few thousand words praising each menu item, I’d rather spend that time eating and drinking at Maryjane. So today I am going to focus on my favorite offering: the Just Baked Chocolate Cupcake.

I miss cake and cupcakes. Most of the cake I have tried in Korea, although possibly delicious on its own merits, fails to meet my Western cake/cupcake expectations. Also, Korean cake = glorified bread. So when I heard about the Maryjane cupcake from some friends, I knew I had to try it. And try it I did, about 6 or 7 times. This cupcake is not a cupcake, friends. It is everything a cupcake dreams of becoming when they grow up.

When I was young, my mother used to make brownies. For some reason, the brownies were always for other people. She did let me lick the brownie batter off the spatula though, and I have had a preference for batter over brownie ever since. The Maryjane cupcake reminds me of licking that spatula with every single bite.

The cupcake is actually served in a cup. It comes baked with a crusty layer of cake on top. Once you break through that layer, you dip your spoon into brownie batter’s half-baked cousin of heavenly proportions hiding out underneath. It is warm, rich, gooey, and almost too good to share. They’re made to order, so settle in with a cup of coffee or a relaxing herbal tea and wait for that chocolate cupcake to arrive piping hot from the oven.

The Just Baked Chocolate Cupcake, although personally believed to be the star of the show, is only one of many delicious options on the menu. I’ve also scarfed down my fair share of bulgogi hotdogs and tortilla pizzas. Maryjane is one of those little jewels you find in small towns like Wonju. They’re dedicated to excellent taste, kind service, and homemade goodies that make you want to move in next door. This café is a reason to hop on the bus, take a daytrip to Wonju, and eat some cake in a cup.