Seoul Hotels: Where To Stay In Seoul?

In my experience talking to our tour guests, the most popular Seoul hotel areas are Myeong-dong, Hongdae, Jongno, Itaewon, Insa-dong, Dongdaemun, Bukchon, and Gangnam. Some people have loved their places. Others have shown regrets. It depends on your expectations and goals. Here is a quick rundown of each area. Going “Gangnam Style” has the cachet of going all ritzy. That is, if you consider ritzy to be a bunch of Starbucks and Dunkin Donuts. There are some attractions in Gangnam, like Lotte World, Lotte World Tower, Bongeunsa Temple, and Garosu-gil. The government has tried to set up K-Pop attractions, and Samsung has an electronics showroom. It’s also the epicenter of medical tourism, so it’s convenient to stay there if you’re getting some work done.
Other than that, it’s kind of bland in the culture department. Some hot clubs are there, along with high end nightlife. The hotels are some of the best in the city, and it’s convenient to the Coex, in case you’re there for a convention.
The largest downside of Gangnam is that it’s a chore to travel from there to the places visitors want to go to. Lines number 2 and 9 are notoriously packed and nasty. Line 3 isn’t so bad, but it goes north and south. It can get you to north Seoul and all the palaces and such. Taxis are extremely difficult to deal with there.

Dongdaemun is consciously going through development. It was traditionally the textile district. These days it’s known for its clothing markets and Seoul Fashion Week. The centerpiece is the new Dongdaemun Design Plaza, which is a great wonder of modern architecture.
It’s still not tourist friendly. The restaurant scene, though to my liking, is a little rough. There isn’t that much within walking distance. It gets kinda shady to the east. It does use subway Line 5, which will get you to most places you’re likely to go. This is the romantic hanok village. I like it here, but it’s getting so overrun with tourists, they’re making restrictions. The only reason to stay here is for the hanok experience, which if you can sleep on a pad on the floor, is something that is truly memorable. The hanok stays tend to be pricey, but you can catch some deals.
The other thing to consider is that they’re quite a trek from the closest subway station, up winding hilly streets. Many times I’m waiting at the meeting spot for The Dark Side of Seoul Ghost Walk, which starts near there, and I see tired tourists lugging their luggage up the hills with both hands.
Since it is a residential neighborhood, there is no nightlife. It gets more active and neon-y a short walk to the south in Jongno. The restaurants there tend to be fake Italian places and coffee shops. Oh, the coffee shops! You’ll always be near a coffee shop.
You are within easy walking distance of the classic Seoul sightseeing areas, including the palaces, the Blue House, Insa-dong, and Gwanghwamun Plaza.

Insa-dong is one of the major tourist zones. It’s a great place for souvenirs and getting lost in romantic alleys. There is a lot to see and do. I used to have an office there, so I know it well.
I also know that it’s scant with good restaurants. It was difficult to get a decent lunch there. You’d have to trek further out for some good fare. For nightlife, there is the Avenue of Youth across the street to the south and Jongno 3-ga, where the partying seniors hang out, and Ikseon-dong, the new cool youth Instagrammy area. Jongno 3-ga is also one of the last areas where there are soju tents, like you see in the Korean dramas. A lot of people stay in Myeong-dong. Some like it. Some regret it. The ones who like it appreciate its convenience to other locations in Seoul. But Myeong-dong is notorious for two things: crushing crowds of tourists and few good restaurants. The nightlife there is dull as well. I’ve never heard anyone say, “Hey, let’s go hang out and have a beer in Myeong-dong!”
There are some affordable hotels there. It’s good for cosmetics souvenirs. And that’s about it. Cheap foot massages?
That said, there are some delightful little guesthouses north of the shopping areas, nestled at the food of Namsan Mountain, convenient to the Namsan cable car. A lot of business travelers stay in Itaewon. Those are the people who are just here for business and have little interest in cultural immersion. Itaewon has gotten better over the years. It’s not the expat gutter it used to be. It’s one of the hot nightlife areas now. The international restaurants and bars are best here. But Korean food is laughable.
If you are a single traveler and want to meet other English speakers, including English speaking Koreans, this is a good location. The bars here tend to stay open later than in other parts of the city, in case that jet lag is really hitting you. It’s also more centrally located than other popular areas. But don’t count on taxis. Itaewon is as bad as Gangnam in taxi reliance. Take the subway. Jongno and Jung-gu (City Center) comprise the classic sections of Seoul. It’s where all the major attractions are: palaces, temples, Cheonggyecheon Stream, Gwanghwamun Plaza. It’s within walking distance of Insa-dong and a short train ride to Dongdaemun fashion center and Itaewon.
The only downside of Jung-gu is that it’s also the center of Korea’s protest culture. We haven’t had a major protest that closed down the streets since 2017. It can get noisy, but it’s peaceful. Don’t let the police in riot gear freak you out. It’s safe.
There are some great hotels here. I’m including Lotte Hotel here because it straddles both City Center and Myeong-dong. The Four Seasons is one of our newest luxury hotels, and it’s a wonder. There are a lot of secrets and Easter eggs in this hotel, including a hidden speakeasy. Oh, and a secret you may only find out from me–there’s another hidden speakeasy inside the hidden speakeasy. It’s the youthful hip section of Seoul. It used to be where all the punks and hippies hung out with a grungy club scene. Even though it’s more of a theme park, it’s a lot of fun. You could spend your entire trip in Hongdae and have tons of adventures.
The Hongdae guesthouse experience is something everyone has said good things about. Hongdae is full of them, and I’m surprised that more visitors don’t take advantage of them. I’d put Hongdae guesthouses up there with Bukchon hanoks as must-dos.


Areas that are off the radar

If you want a good area that’s convenient, but you’re allergic to tourists, here are some areas the guide books overlook. 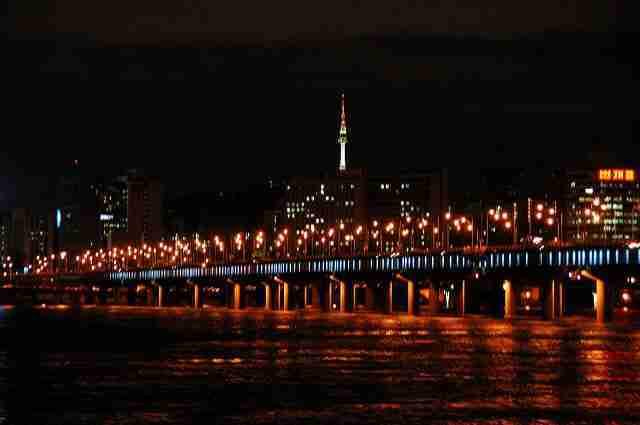 Here’s my case for Mapo. It’s in southwestern Seoul. I call it the bedroom community for bankers because it’s just across the bridge from the Yeouido financial district. It has what I argue is the most convenient hub of subway connections in Seoul. It connects to the AREX airport line at Gongdeok Station, which also connects to Line 6 (Itaewon), Line 2 (Hongdae, Gangnam, north Seoul), and Line 5 (Yeouido, Dongdaemun).
It’s a secret gem because the tourists and the Gangnam locusts haven’t invaded it yet. It has a variety of great Korean restaurants. A lot neighborhoods have some really good restaurants specializing in one dish and a bunch of copycats. This area has great BBQ, pubs, soups, seafood, markets. I do a lot of food tours there. It has good nightlife if you’re not into clubbing but enjoy a good drink with anju (pub grub).

It’s still part of the northern classic city center, but the charming area west of Gyeongbokgung Palace isn’t overrun by tourists. I find it a little reminiscent of quaint Parisian alleys, dotted with tiny cafes, restaurants, and bars. It’s also near Tongin Market, which is one of the cooler open air markets in Seoul. The closest station is Gyeongbokgung Station, on Line 3, which can take you to Insa-dong and even to Gangnam.
Buam-dong is just through the tunnel, and it’s a side of Seoul you’d think didn’t exist. It’s an isolated mountain village. The only hotel I have listed here is Cindy’s B&B. It’s perfect for travelers who really want to get away from it all, go hiking, enjoy home cooked Korean meals, and have a truly immersive Korean experience with Cindy and her family.

I’m on the fence on this. Guro is south of Yeouido in an industrial-tech district. There is no sightseeing here. I used to live in Anyang, just south of it. The only reason I’m including it is that it is a slice of real Seoul. The restaurants are good and authentic. It’s like the non-touristy neighborhoods of Tokyo in that no matter where you go, there’s a story to be created.
TIP: Near this area is Daerim Station, which is home to Garlic Chicken Alley. That is a place that your friends haven’t discovered yet.


Areas that aren’t so good, unless you’re here purely on business

It’s purely a business district. It’s dead at night. It has a couple of subway lines going through it. Those include the infamous Line 9, the only privatized subway line in Seoul and the most miserably crowded.

There is nothing to eat around here except for fast food. There’s no nightlife. It’s a train terminal and is convenient to Jongno, Myeong-dong, Itaewon, and N Seoul Tower. It’s also where Seoul’s homeless congregate. The only people you see in this area are those trying to move on from this area.

The two hotels there are top in their class. I love them. If you’re looking for a resort or casino experience then these are your hotels. But it is a resort area, meaning it’s removed from the rest of the city. This is where celebrities and dignitaries go to avoid the public.

This is where I live, and I love it. I couldn’t imagine visiting it without a car. You may end up in a layover in Gimpo. The hotels near it are fine, but access to restaurants and the scant nightlife are nil. The only advantage is that it’s connected to the AREX airport line, so you can zoom into Seoul in 20 minutes. I use that line almost every day. Be aware that the subways close at midnight.

Read everything I said about Gimpo above and make it even further outside of Seoul.

The only reasons you’d end up in Ilsan is if you’re at a convention at KINTEX or having a meeting at Hyundai. I personally like Ilsan a lot. It’s just across the bridge from me. There is good nightlife there. And good restaurants. Yet it is VERY inconvenient to Seoul, if that’s what you’re interested in. But hey, contact me if you want to get out. Or if you want someone to show you around.

What are your experiences with Seoul hotels?

Those of you who have traveled Seoul, please share your hotel experiences with the community. Is it worth it for a hanok stay? Did you try a Hongdae guesthouse? How about love motels?
Please post in the comments.