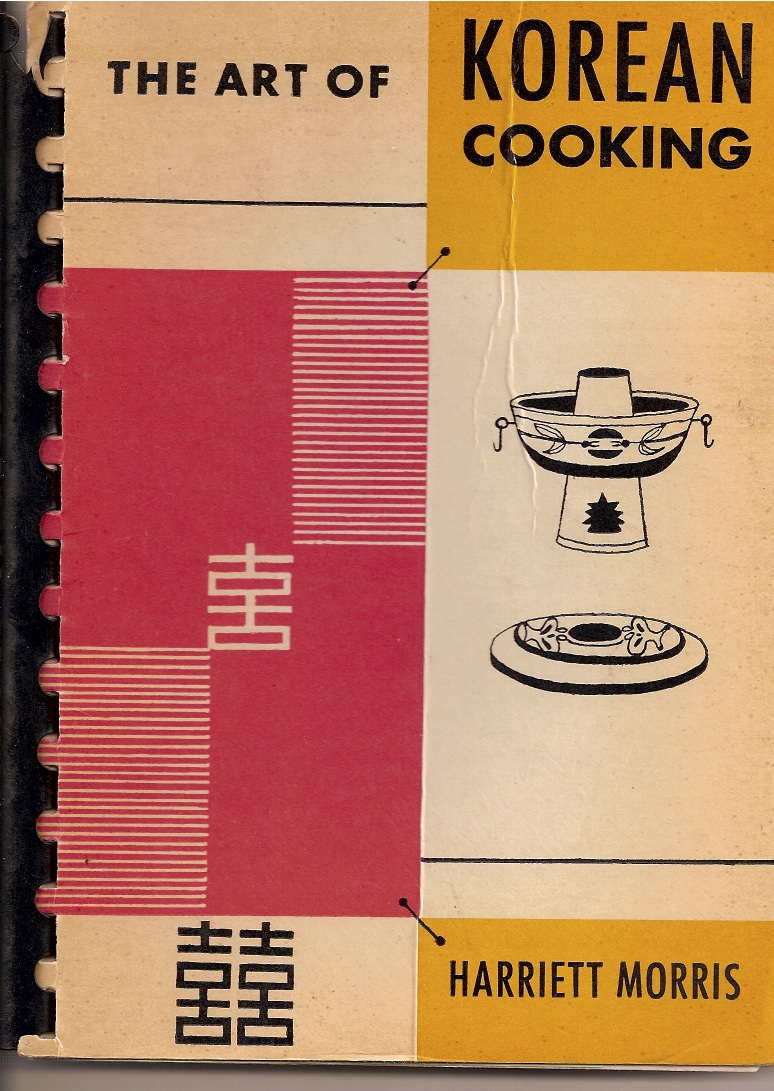 A friend of mine recently gave me an amazing gift, a Korean cookbook published in 1959 that she found in a used bookstore.  Called “The Art of Korean Cooking,” it’s a slim, spiral-bound book of just over 100 pages.  There are no photos, but there are nice drawings by Joon Lee, and the prose, by Harriet Morris, is straightforward and clear, even if she is a little anxious about making sure the food “suit[s] the Western palate.”

What I love best are the funny proverbs at the beginning of each chapter.  I have no idea what these proverbs mean.  The chapter on “Keem-Chee” starts, “Small, but nevertheless a pepper seed.”  I do understand this one, though: “A majestic view has no charm when the table is bare.”  So true, so true.

So how have the recipes been modified for the Western palate?  Nowhere can I find a recipe that calls for doenjang, fermented soybean paste, or gochujang, red chile pepper paste.  These two “jangs” with ganjang, which means soy sauce, are the three absolutely essential items in a Korean kitchen.  To Morris’ credit, I’m sure neither was easy to find in the U.S. in 1959.

Even funnier, though, is her use of fresh chile peppers as a substitute for gochukaru, red pepper powder.  It’s actually not inauthentic to grind up whole peppers, dried or fresh, and use them to make kimchi.  Some of the best kimchi I’ve ever had has been made this way.  But never in the proportions she calls for.  Three heads of celery cabbage (Napa cabbage) require only 6 tablespoons of chopped chile pepper.  Three large cucumbers only need half a teaspoon.

But overall, there is something about the recipes that is true to the spirit of Korean food, even when they call for ingredients that aren’t common in Korea, like string beans. Morris is unafraid of presenting recipes for things like “Broiled Heart” and “Sin-Sul-Lo” (shinseollo), a royal braised dish of a gazillion ingredients that is a serious pain to make.  Even better, most of the recipes are for homespun dishes like black beans simmered in soy sauce, where the beans “will be hard and salty” and “eaten in small amounts with rice.”  In her two-sentence intro to the vegetables chapter, Morris writes, “Korea has many interesting roots, leaves, mosses, and sprouts.”  There is nothing in her tone that exoticizes the food or apologizes for it.  She’s clearly writing from the perspective of someone who’s eaten, and enjoyed, Korean food many, many times.

I wonder who she was, this Harriet Morris.  The book says she was with the Methodist Mission in Korea for 20 years, during which time she “was widely and lovingly known as a teacher of Home Economics at Ewha Woman’s University.”  And then she returned to her hometown of Wichita, Kansas, where she tested these recipes.  This book is actually an expansion and reprint of a book begun in 1943; she obviously hoped “the enjoyment of Korean food will not be limited, but will be shared by folks in many lands.”  She must have lived in Korea during the Japanese Occupation, started the book before the Korean War, and then published this edition after it.  What a life she must have lived!  I’m touched that she saw something in Korean food worth communicating to people who most likely only thought of the country in terms of war and poverty.