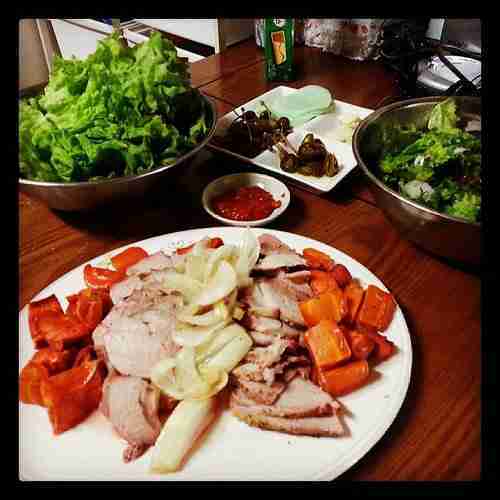 I’d been craving an old-fashioned Sunday Roast. I didn’t care what meat. EJ saw that some giant cuts of pork were on sale. She bought two for W10,000. She said, though, that she wanted Bossam. I figured we could compromise. If David Chang can do a roast for Bossam, so can I .

The night before, I dissolved salt and sugar in some warm water in a large zipper back. I put the pork in there and let it brine in the fridge overnight. Around 10:30 the next morning, I removed it from the brine and let it rest and dry a bit on an inverted stainless steel mixing bowl in the sink. I cleaned some root veggies. I put the pork on the raw meat cutting board and scored it in a diamond pattern. Jian helped me season both sides liberally with coarse salt and fresh ground pepper. I cut up some carrots and an onion. I let Jian use the knife to cut a carrot–a very supervised cut. She helps me cover the bottom of a foil-lined pan with the veggies and throw some more seasoning on them. I rolled the roast up to ensure that each side was of even thickness and put it in a 200 C oven for 20 minutes. I then cut the heat down to 150 C and let it roast for two hours.

For the condiments, I washed some lettuce and put together what we had around the house. I got some MooSsam (pickled radishes dyed green with wasabi), sliced some fresh garlic, spooned out some sliced jalapenos, and even found a use for the leftover giant caperberries from the Game of Thrones pop-up restaurant.

I also made a quick salad with some of the lettuce with some thinly sliced red onions and minari (a type of water dropwort). The dressing was a vinaigrette of yuja cha, thyme honey, Dijon mustard, Balsamic vinegar, and EV olive oil. I topped the salad with leftover wine-stewed prunes from the pop-up.

I rested the pork and sliced it as thin as I could. The last touch was a dollop of Ssamjang from the local grocery store. I just wanted the green tub stuff.

CONCLUSION: Worked. The classic salt-and-pepper roast taste works with the Ssamjang and condiments in a lettuce wrap. I also got out some homemade applesauce for the pork. That worked too.