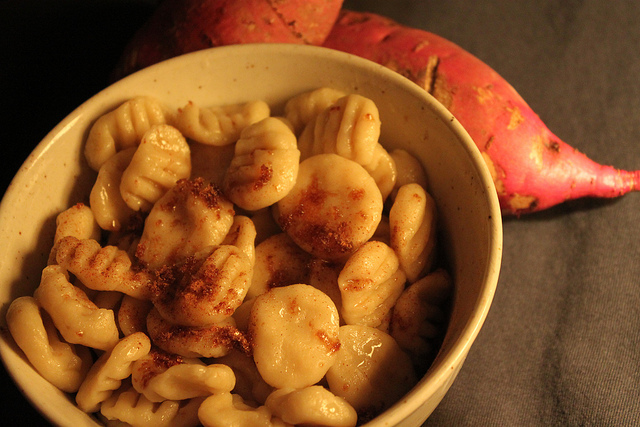 This is an experiment that’s been brewing in my head for a while. I don’t know what made me think of it, but I wanted to make a dessert gnocchi using Korean sweet potatoes. The reason was I don’t like bahm goguma 밤고구마, the “chestnut” style sweet potatoes. Unlike the orange hobak goguma (pumpkin sweet potatoes), bahm goguma have light starchy dry flesh that I need a gallon of milk to chase down. But because of this starchiness, I felt it was a prime candidate for gnocchi.

Keeping with the journal aspect of this site, this is what I did, and I’ll note what I would do differently next time. 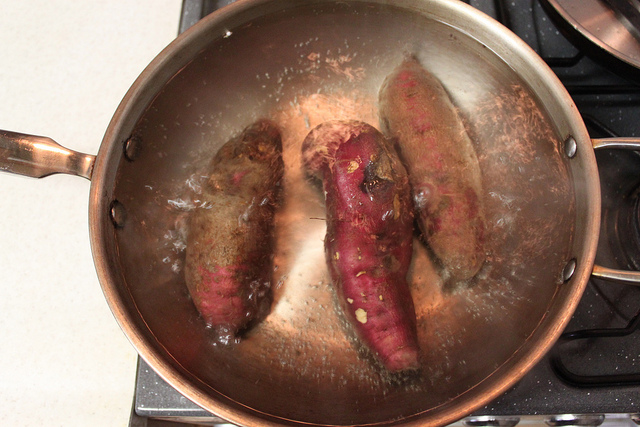 I boiled three sweet potatoes until they were tender. Just poke them with a chopstick to see when they’re ready. 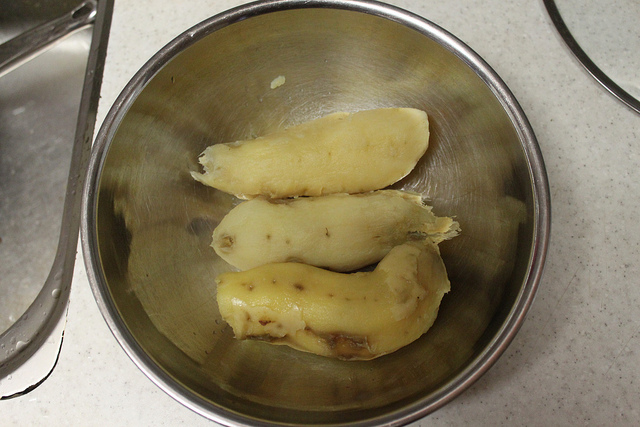 I shocked them in cold water to make the skins come off easier and peeled them. EJ snagged a bite. Again, these are the chestnut variety of sweet potatoes. That’s why they’re whitish. 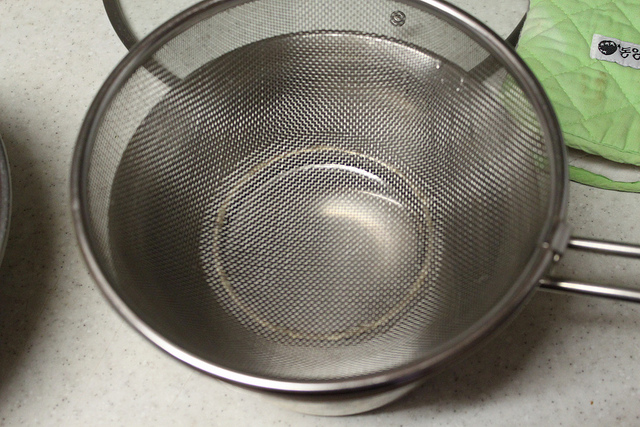 Now, when I’ve made gnocchi in the past, they’ve turned out heavy and gummy. A few people then suggested that I put the potatoes through a ricer. Well, I don’t have a ricer. So I put a mesh colander over a pot… 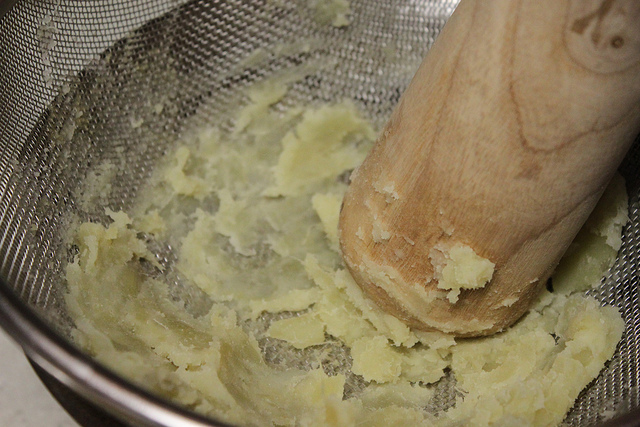 And smashed them through with my big wooden pounder. This was the first time I tried anything like this, and it actually worked. I’ll make mashed potatoes this way from now on. It does beef up your arm a bit. 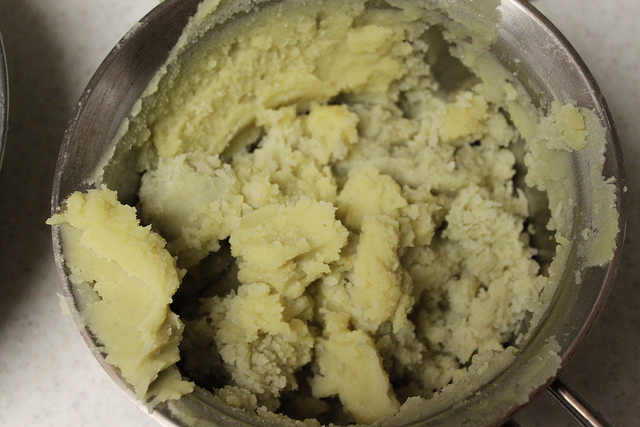 This was the end result. Throw in some butter and cream, and we’d have a nice side dish. But for gnocchi, I put in 2 1/2 cups of cake flour, a pinch of salt and an egg. 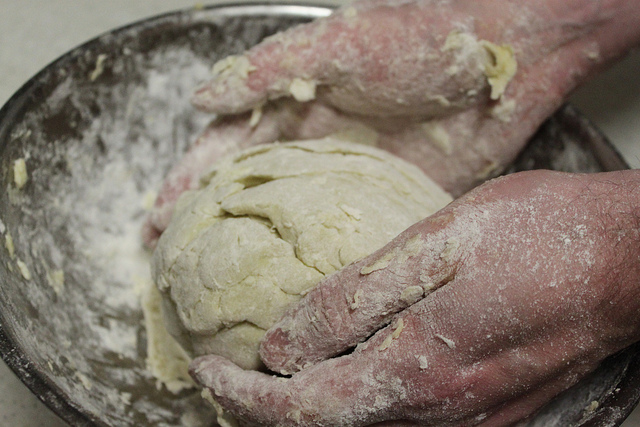 I then shaped it into a ball. 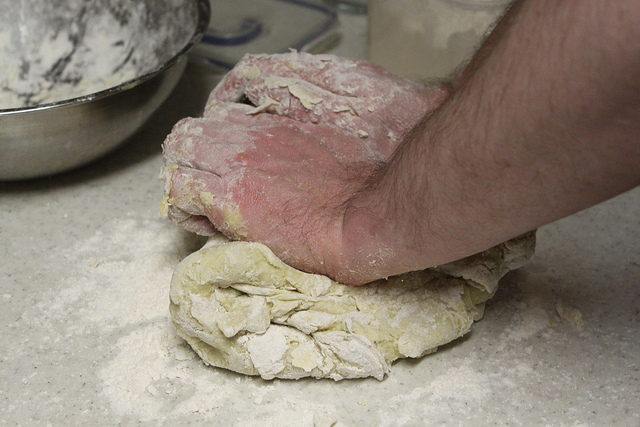 And kneaded it a bit. Not too much. 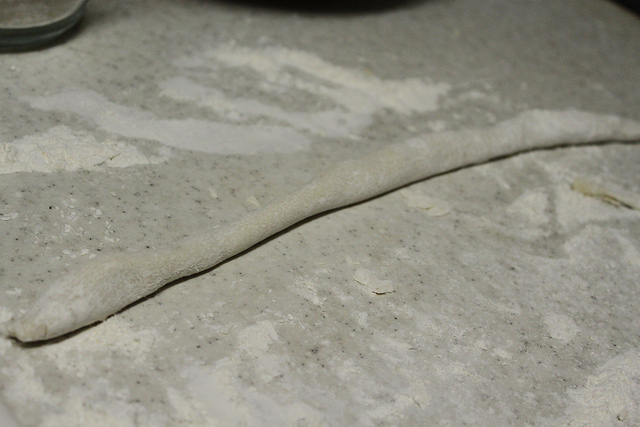 I took a piece and rolled it out like a snake. This is where that pre-school training comes in handy. 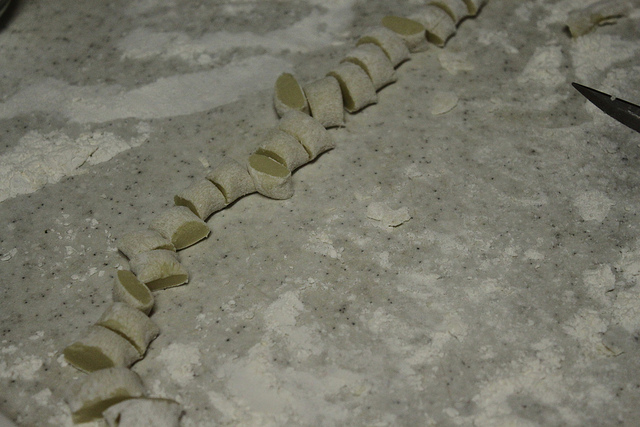 Cut them into pieces with a knife. EJ convinced me to make them bigger after this batch. 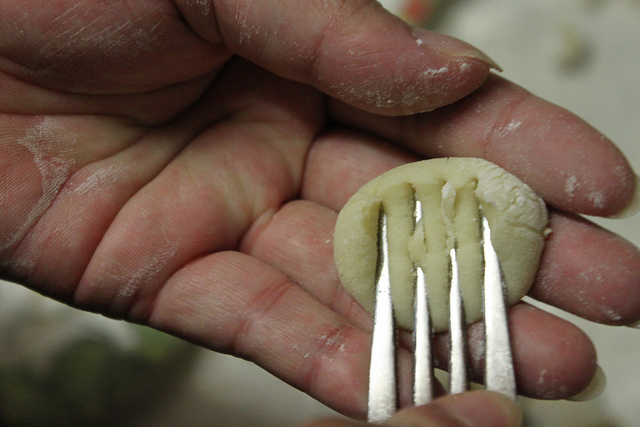 She helped me by scoring them with a fork. They looked like white beondaeggi. 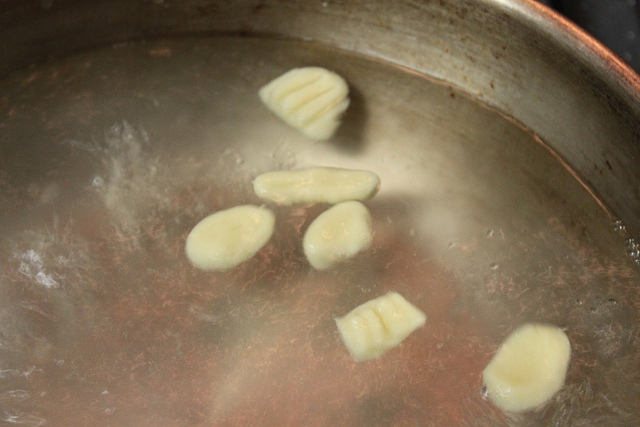 I cooked them in salted boiling water until they were blurry floating. Then scooped them out. 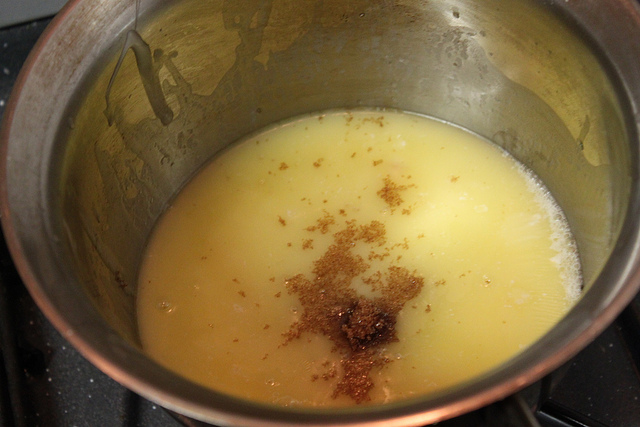 In another pot I melted a stick of butter with around three tablespoons of dark brown sugar. The taste was heavenly! 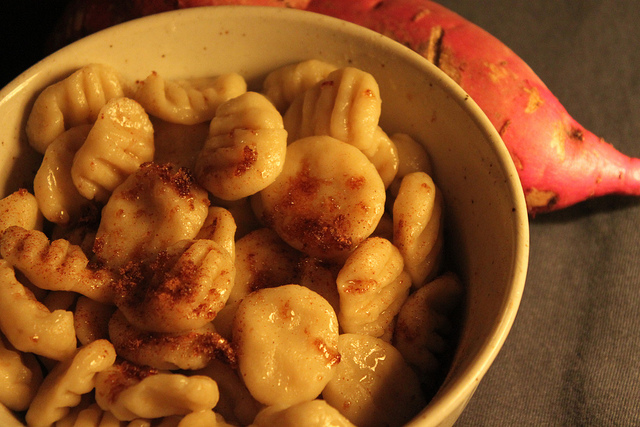 I tossed the gnocchi in the butter and sprinkled a little more brown sugar and a few dashes of cinnamon.

How I would do it differently

I could taste the sweet potato in the gnocchi, but it wasn’t immediately evident. Next time, I’ll mix a tablespoon of sugar with the egg and add it, along with some more salt.  Maybe garnish the end product with some apples or more sweet potatoes.

Even though I can think of improvements, it turned out pretty darn good. This made a lot of gnocchi. Make sure you have a child around to help you. We brought a bowl downstairs to our neighbor.