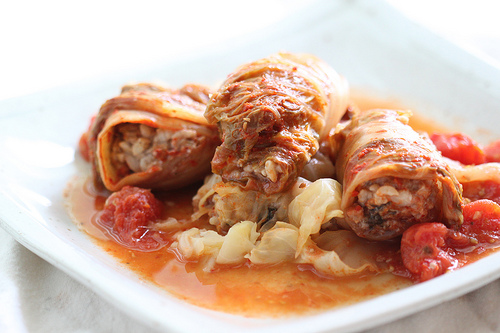 My first impression of Korean food was its striking similarity to eastern European cuisine. Some dishes reminded me a lot of my grandmother’s goulash. I noticed that gochugaru had sweet aromatic properties similar to Hungarian paprika. Kimchi jjigae tasted a bit like borscht, which is why it’s great with a dollop of sour cream.

It wasn’t until I was in that international cooking contest that I saw a dish by Maria Bakhmurova that made me smack my forehead–Kimchi Golubtsy. 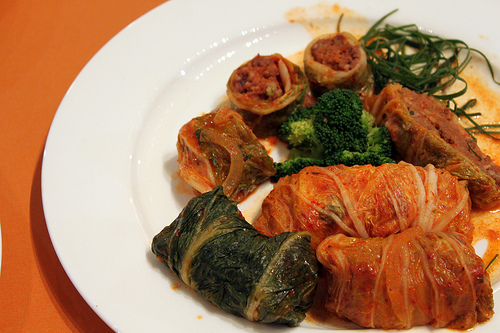 They’re just like my grandmother’s cabbage rolls (which we called “Pigs in a Blanket”) but with kimchi. Yes, I know the LiteralNet will point out that kimchi is pickled cabbage, but you see why I slapped my forehead. Such a simple leap in ingredients. And the tartness in the kimchi reduces the need for a sour vinegary sauce. I wasn’t able to talk to Maria and ask for her recipe, so I had to try to make this on my own. But make sure that credit goes to her for the original idea.