EDITOR’S NOTE: This is the first post by guest contributor Jenna Collett 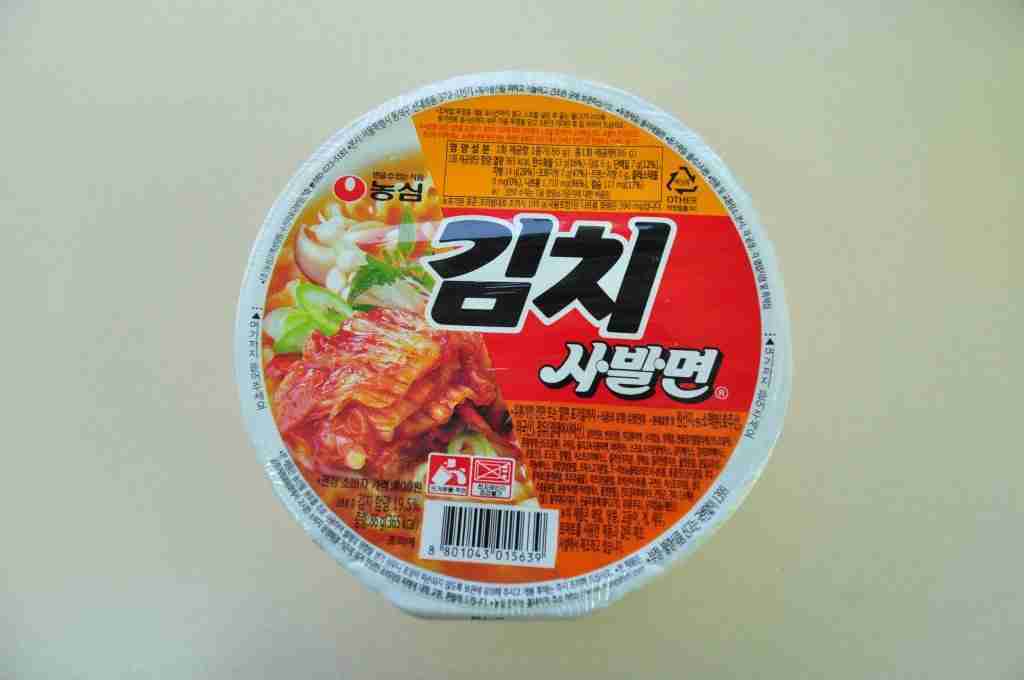 I have never seen Ms. Ahn eat alone. I’ve never seen her eat without sharing with the closest available mouth. On any given day I’d be handed a near constant stream of easy-to-share edibles: segments of oranges and tangerines, slices of exquisitely peeled apple, rice cakes, biscuits, sweets, and rounds of homemade kimbap. I have likewise witnessed my Korean colleagues halve the most impractical foods in order to share them. I’ve seen a chicken burger divided into quarters, grapefruit painstakingly pulled into segments, cream cake sliced with chopsticks, and bananas cut in two with their peels still on. Outside the office I have been offered biscuits and a generous handful of nuts by hikers met on route (admittedly, they were enjoying a celebratory soju at the summit, which could have contributed to their kindness).

Korean dining, like many Korean cultural mores, is collectivist in nature. This is in contrast with a dining experience in a ‘Western’ or globalised office, where individuals indulge in specialised snacks modified to their preferences. Of course, offers of food aren’t banished from the Western meal (the rest of the world aren’t complete heathens), but my peanut butter and banana sandwich is not a taste universally shared. Besides, I may be eating that leftover square of lasagne that I’ve been looking forward to all morning (portioned for one), or a Masala-based curry that may be too spicy for my friend down in admin to enjoy.

With this cultural difference in mind, it’s no wonder it took a year for me to notice the one dish that is frequently eaten alone here. In fact it’s eaten alone, in convenience stores, while standing. Food is not generally munched on the hoof here, and I’ve been given the grandmother scowl more than once for eating on public transport or while walking in the street. Food is shared, and–preferably–eaten while seated around a table. But increased time away from home due to the pressures of school and work no longer allows for this on a regular basis. And while adults can afford to eat at restaurants or get food delivered to their workplace, students on their way from one school to another need a cheaper alternative. Enter ramyeon, or 라면.

While ramyeon noodles hail from China and were introduced to Korea via Japan (where the dish can be eaten in its homemade form), Korea probably has the spiciest twist on the instant snack. In the Ramen Rater’s Top Ten Spiciest Instant Noodles of All Time list, Korean brands of ramyeon appear five times (six if you count the brand adopted by an American company), with the most popular and bestselling being Shin Ramyeon (신 means spicy). Although China consumes the most instant noodles of any country in the world, South Korea takes the top spot in terms of most ramyeon consumed per person per year (the figure has been estimated at a stomach churning 70 packs).

I’ve tried ramyeon many times before, both at home and in Kimbap Nara joints, but until recently I’d never eaten them at a convenience store. Having some time to chew on a rainy, particularly penniless Tuesday, I decided that some ramyeon from the 7-Eleven would be the perfect fit for both my stomach and my wallet.

Deciding on a flavour and brand when faced with a myriad of brightly coloured containers can be a daunting task, but I’ve got my go-to favourites. If you need help figuring out yours there is a top ten list with helpful explanations. I chose a kimchi flavoured pack and made my way to the counter. It was here that I started to realise that I had unwittingly entered into a cultural experiment of some kind, as the cashier blinked at me, slightly befuddled by the scene about to ensue. Wanting to blend in, I stalled to get a bottle of water and watch the boys already eating to see how it’s done. 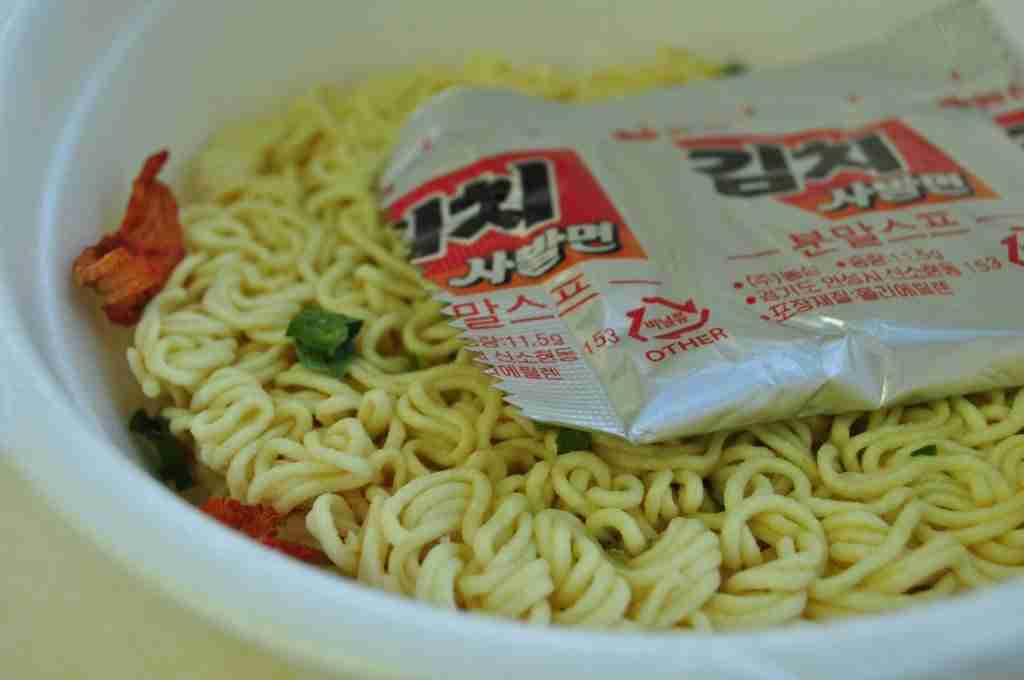 Step one: Open the pack and chuck in sacheted flavourants, freeze dried meat, vegetables and seafood (no one ever said this meal was good for you).

Step two: Pour boiling water into the container and cover. (This can be done with the lid, but placing additional items on top is recommended for extra sealage).

Step three: Whip out your phone and begin to play games, message friends, and read the news while you wait for the noodles to cook.

Step four: Eat as quickly as possible (some can achieve warp speeds while the water is still near the temperature of the sun).

Step five: Be a young Korean student negotiating the hormonal haze that is adolescent life.

It seemed easy enough. Except the part about being an adolescent; my mutant phase is happily behind me. 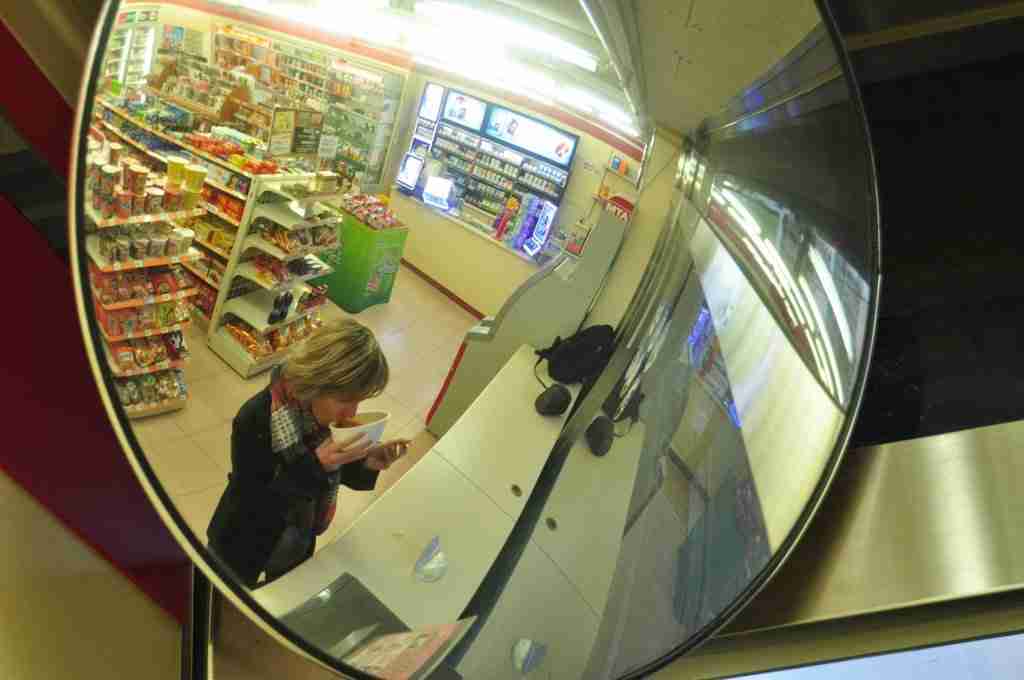 Chopsticks from the cashier in hand, I went to the counter housing hot water, a microwave, and tissues. New to the game, I couldn’t get the hot water to work, so I asked my nearest dining companion–who looked rather shocked to see a female foreigner on his lunch turf–for help. Things were going swimmingly as I took up a standing position next to him and unpocketed my smart phone. I was blending in suitably and wasn’t getting too many looks through the store’s large glass windows. When I’d spent a sufficient amount of time on my phone I checked the noodles. Ready.

Another group of boys in uniform gambolled in, and I learned that there is a regimented queue strategy to fine 7-Eleven dining. The guy to my left shifted up so that I could follow suit and let the boy to my right have access to the hot water and some counter space. This shift prompted the boy on my left to speed up his lunch even further, dump his trash, and then leave to allow for more shuffling towards the end of the table to let the third boy in.

Following my left-hand companion’s lead, I was eating while holding the cup close to my face. Here, you run the risk of scalding splash-backs, but less overall mess is made. However, there are many ways to schlurp a noodle. The young boy on my right was carefully using his plastic lid as a plate, so that he could continue watching a video on his phone. He might have found this Anti-Loneliness Ramyeon bowl handy. His buddy next to him was still in the game-playing stage of the meal, but as I shifted up once more I noticed he was more of a drinker than an eater. I tend to scoop up a group of boiling noodles and bite, sending any stragglers back into the cup, but the boys just keep gathering noodles from the bowl with their chopsticks, fitting more and more into their mouths. I call this the rope-climbing method, and it’s definitely one to leave to the pros on your first go.

The sight of a blonde, adult foreigner eating 7-Eleven Ramyeon with the best of them did eventually turn a couple of heads, and even broke a few gaits, but it was worth taking part in one of the most ubiquitous Korean experiences not often shared. 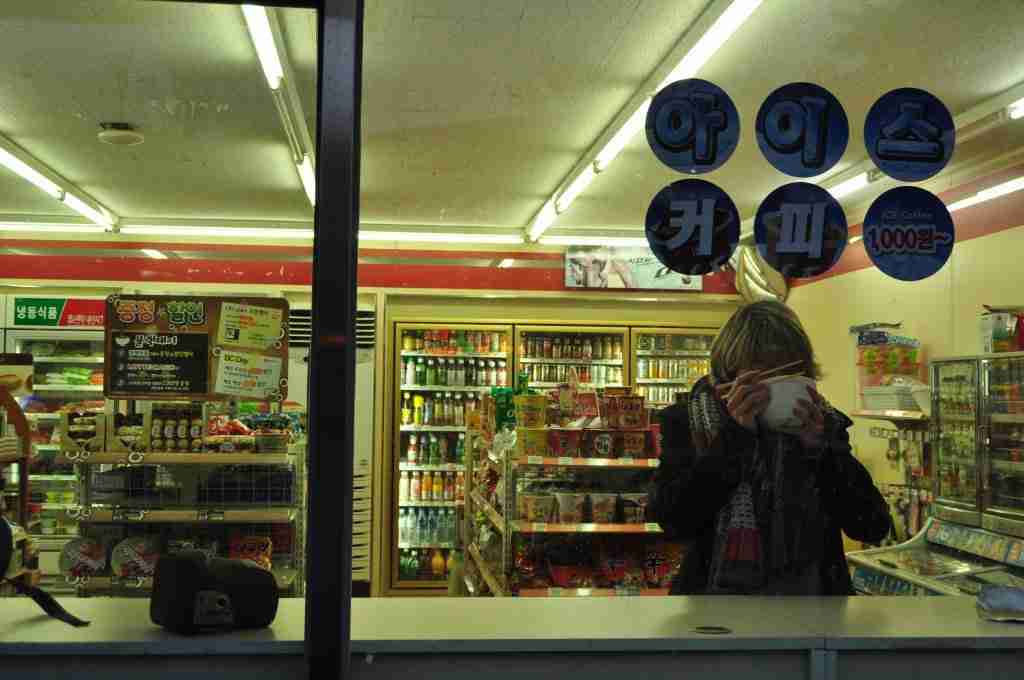