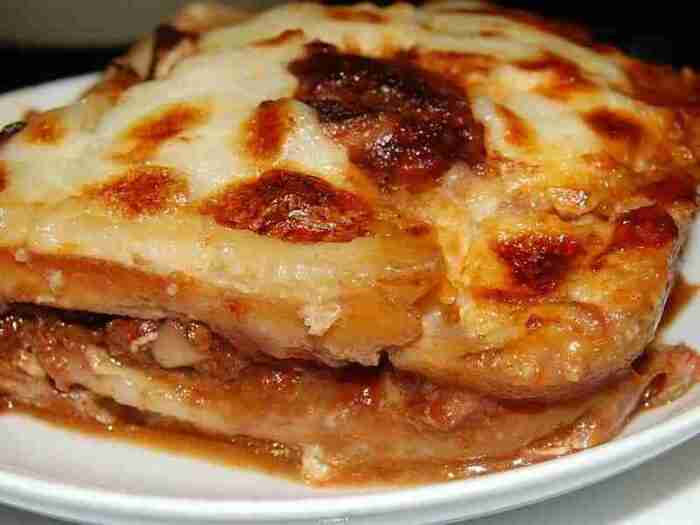 Do you have any leftover sliced tteok after making the rice cake soup (떡국; tteok guk) on New Year’s Day?  Tteok guk is good any day and also one of the best hangover food for me, so I always keep a package of thinly sliced tteok in the freezer.  The thinly sliced, coin-shaped version also cuts down the rubbery texture of the tubular kind of rice cakes which some people are not used to.  This makes the sliced version a good substitute for the tubular kind in making tteokbokki.  Another way to make an easy use of sliced tteok is to make lasagna with it.  Just replace lasagna sheets with thinly sliced tteok, and it adds pleasantly sticky bites to the dish.

Here is a basic lasagna with sliced tteok recipe: Soak sliced tteok in boiling hot water for 5 minutes then drain.  Pre-heat the oven to 350F/180C.  Mix ricotta cheese with an egg.  Layer from the bottom of the pan – tomato sauce – bulgogi meat (or thinly sliced beef) – sliced tteok – ricotta-egg mix and repeat the layers one more time.  Cover the pan with aluminum foil and bake for 20 minutes.  Remove the cover and bake for another 20 minutes.  Top with mozzarella cheese (or mix with grated parmesan) and broil for 5 minutes to melt the cheese on top.  Take the pan out.  Let it rest for a few minutes before serving.

I’ve also used just stracchino cheese which adds slightly tangy flavor (pictures above).  Meat is optional, as well as other bells and whistles of your liking.  Just make sure to start with the sauce at the bottom of the pan and majority of cooking ingredients is done before baking in the oven.  Pick cheeses that stand well as a layer and melt well on top.  At the end of the day, it’s just a fun way to enjoy sliced tteok and lasagna together – a warm, hearty dish on a cold wintry night…