Yes, despite of culture of health consciousness, fast food has penetrated the Korean market with abandon. McDonald’s has dressed in its own hanbok to adjust by having bulgogi burgers and other specialties meant to attract Korean diners. 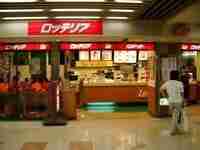 Korea’s mega-conglomerate Lotte has its own big franchise, Lotteria. My impression is that it is the most successful of Korean fast food franchises thus far. I have even seen stores in Japan.

Foreigners I know will not touch Lotteria. That’s because foreigners tend to walk in and order something that is familiar to them. Lotteria is not the place to go for a hamburger. There are other artery thickening foods that are much tastier.

Every time I go, I try to explore a different menu item. Today, it’s the
Shrimp (“Sae-u”) Burger (새우버거) versus the Hot Squid (“Ojingeo”) Burger (오징어버거).

What we would normally call a sandwich is all categorized as “burgers” in Korean fast food speak. A burger is anything on a round bun.

First, the Shrimp Burger. I remember there was one foreigner who raved over this thing and was always eating them. I initially avoided it because I assumed it was a fried patty of filler with shrimp flavoring in it. 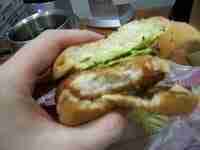 Biting into it is not mealy like expected. The fried patty is packed with processed shrimp. There’s actual shrimp texture in there. The taste reminds me of a Cajun poboy from home. I have become hooked on these, to my detriment. I have also gotten other foreigners into the Shrimp Burger. 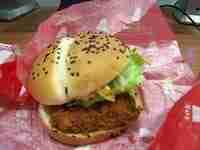 The Hot Squid Burger is a different animal but also tasty. Unlike the Shrimp Burger, the patty is quadrangle shaped. Along with a creamy sauce, it is loaded with a sweet and sour hot sauce, along with the requisite iceberg lettuce. It also has a black sesame seed bun. 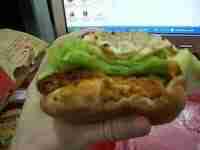 The inside of a Squid Burger is more foreboding and sinful. It is freakin’ spicy for a fast food item. I can only eat one of these in one sitting. The squid itself is flavorless (as is all squid), but it adds texture. The sauce and the flavorings make it sharply tangy.

My conclusion in this lunchtime experiment is that I still prefer the Shrimp Burger for sheer volume of goodness and poboy nostalgia. Yet the Squid Burger is an adequate companion for when I want something different and exciting — especially with a cold beer.