There are a lot of hotteok recipes online.  Based on my blog stats, there are even more people looking for hotteok recipes.  It surprised me that a street food, a simple fried pancake stuffed with brown sugar and nuts, is so sought after.  And then I remembered what it tastes like.

My friend Diane and I agreed when we started working on our cookbook that we would focus on home cooking.  There were people who really wanted us to do a cookbook of Korean royal palace-style food, but we wanted to focus on the kind of food we like best: hearty, simple, and homey. 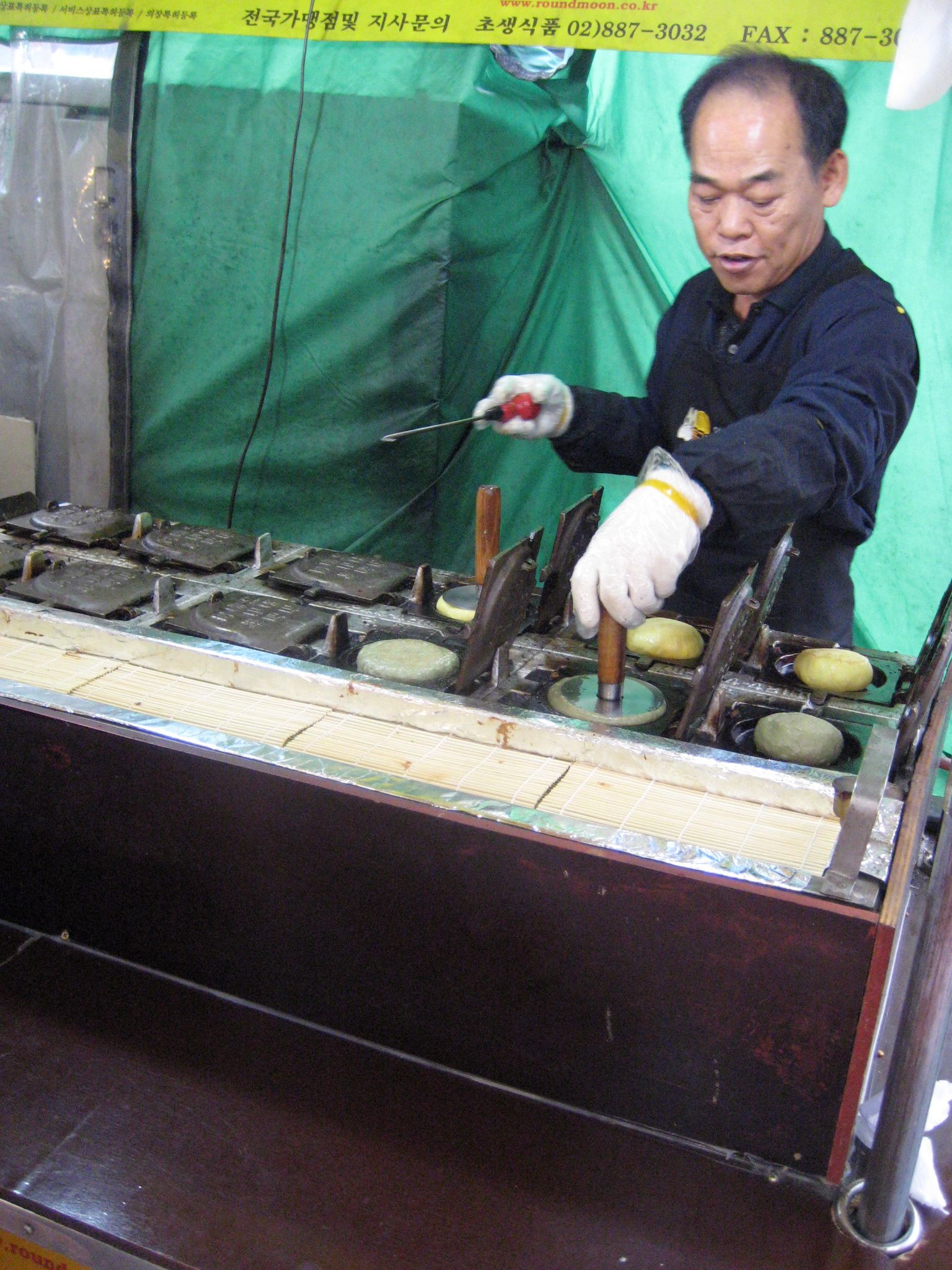 So where does something like hotteok (pronounced “hoe dduk”) fit in?  It’s not something Koreans generally make at home, though premade mixes are popular.  For all the food trends that come and go in Korea, hotteok has staying power.  The dough might change—one year, corn is in, another green tea—and the cooking contraptions change sometimes, too.  I’ve had hotteok that are practically deep-fried and hotteok that are airy, light shells around a thin film of sugar.  (They don’t taste as good as the greasy ones.)  But you can find it wherever young people are hanging out on the streets, even in the dead of winter, at rest stops all over the country, and even in chi-chi department store basement food courts.

I think this is why people outside of Korea are searching for the recipe online.  It might not be something you eat at home, but it’s still intensely familiar.  When it’s gone, there is a big hole in your life.  Like peanut butter for American expats in Europe, or Vegemite for Australians.

Having tried a couple of different recipes online, though, I have to say most of them are not quite right.  The biggest challenge is getting the perfect chewiness right.  It may be hard for you to find glutinous rice flour (also called sweet rice flour), but if the recipe you’re looking at only uses regular all-purpose wheat flour, you are going to wonder how these hockey pucks are supposed to resemble hotteok.  Gluten develops through kneading, and that can make an all-flour dough chewy to a certain extent, the way certain pizza doughs are chewy.  But hotteok aren’t tough-chewy, they’re tender-chewy, like Japanese mochi, Korean tteok, and other foods made with, you guessed it, glutinous rice flour.

The problem, though, is a recipe with a lot of glutinous rice flour is going to be ridiculously sticky.  I found one recipe that made a really wet, spongy dough, very similar to the dough from the mixes, and this one certainly resulted in a chewier pancake, but the dough was so sticky, my hands looked like those of a monster from the deep.  I had to practically sling the dough, misshapen as it was, into the pan, since it wasn’t going to separate from me otherwise.

So the following recipe is my two cents in the discussion of how to make good hotteok at home.  The ratio of glutinous rice flour to wheat flour is almost 1:1, but I keep the liquids low enough that the dough is still manipulable.  As lazy as I am, I’ve found it’s worth it to finely chop the nuts in the filling.  Otherwise, they take up too much space and not enough brown sugar ends up in the pancake.  It’s not as super-crispy as the almost deep-fried hotteok I saw last winter in Seoul.  Instead, it’s chewy with a crust that’s still a bit like bread, and the look is more traditional, a golden-brown center ringed with a paler crust.  Knowing me, I’ll probably tinker with it some more before it gets published in the cookbook, but if you get a chance to try it, I’d love to hear what you think.

Stir together the lukewarm water, one tablespoon of sugar, and active-dry yeast in a small bowl until the sugar and yeast dissolve.  Let it sit for 10 minutes, during which time it will start to bubble and foam.

Combine the flour, glutinous rice flour, salt and remaining tablespoon of sugar in a large bowl.  Add the yeast-sugar mixture and the milk.

Using your hands, bring the dough together into a sticky ball.  Knead it a couple of times, for about two or three minutes.  The dough will be sticky, but it should still come off your hands and stay together.  Cover with plastic and place in a warm spot for 3 hours.  (I put mine on top of my heater.)

After 3 hours, the dough will have doubled in size.  It will look pretty puffy.  When you knead the dough, the dough will almost puncture and let out some air, but remain relatively airy and spongy.  Knead the dough a couple times until it becomes more elastic, but keep in mind that it will never become a smooth, elastic ball of dough.

Combine the sugar, cinnamon, and walnuts in a small bowl.

Heat the oil in a large pan on medium-high heat.  Make sure your pan is hot before you start — your pancake should sizzle when it hits the pan or it won’t form a good crisp crust.  Oil your hands and pinch off a piece of dough, about 2-3 tablespoons.  Knead it into a smooth ball and then stretch it out into a loose circle, creating a depression in the middle.  Fill the depression with the sugar mixture, about a tablespoon worth.  (Ignore how large the walnut pieces are in this photo — this was an earlier draft experiment.)  Stretch and seal the dough around the sugar mixture and flatten it between the palms of your hands.

Drop the flattened ball of dough into the pan.  The oil should be hot enough to sizzle.  Smooth some oil on your spatula and press down on the ball of dough, flattening it further.  Continue making balls of dough until the pan has 3 or 4 pancakes in it. Be careful not to crowd the pan.

Fry the pancakes until golden-brown, about 3 minutes on each side.  Remove from the pan and let them drain on a paper towels or a wire rack.  Serve warm. 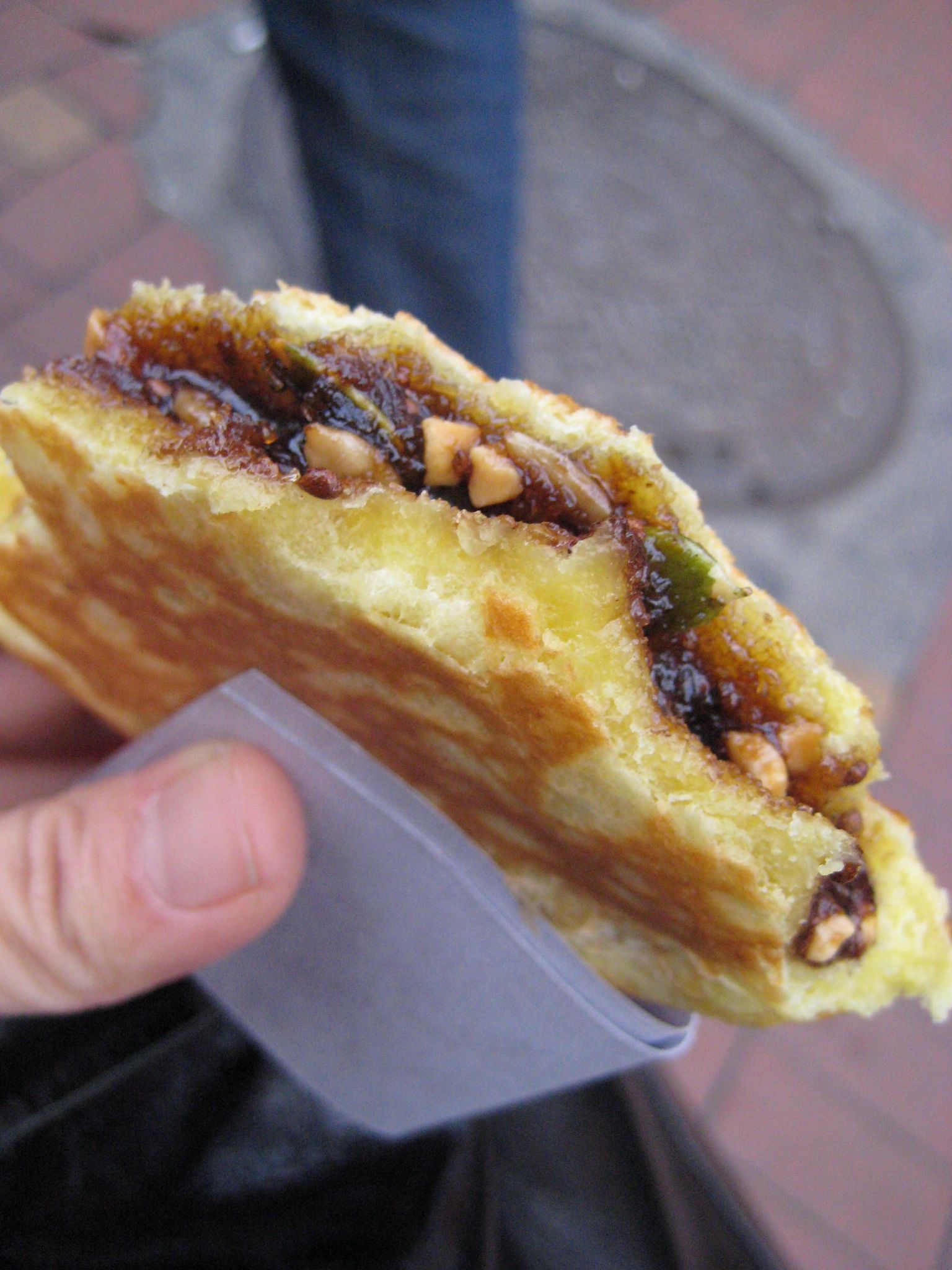