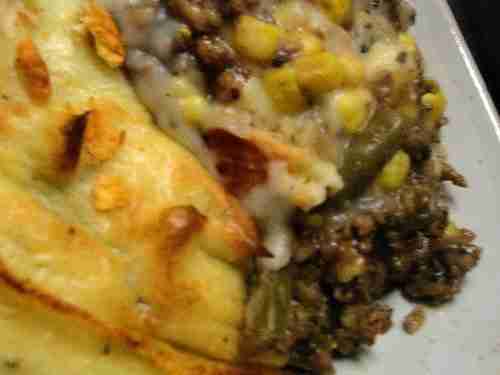 WARNING: This entry has some of the most unappetizing pictures of food on the internet — if you’re not familiar with this sublime Scottish delicacy.

Being that my last name is McPherson, I assume I have some Scottish blood in me. And being the weird and exotic meat fanatic I am, haggis has been on my list of things to try over the years. The thing is, it’s not readily available in most grocery stores in America, much less Korea.

Now, I hear that Gavin’s Sausages in Seoul sometimes does some haggis, but I haven’t been by there yet (one day… it’s my destiny). Instead, this little adventure came about during one of my occasional trips to the Foreign Food Market in Itaewon. This little store is greatly diversifying. A year ago, it seemed to mostly cater to the Pakistani population in the neighborhood. Now it has even more cool stuff, including durian, venison, and the more exotic bits and pieces of animals–including lamb kidneys and such.

I jumped on the kidneys. They were an especially good deal too. I bought a few other things too and decided to try my hand at making some sort of haggis when I had the free time.

I finally had the free time a couple of weekends ago. I looked up a lot of recipes for haggis and decided to make a conglomeration of the ones that I liked the best. 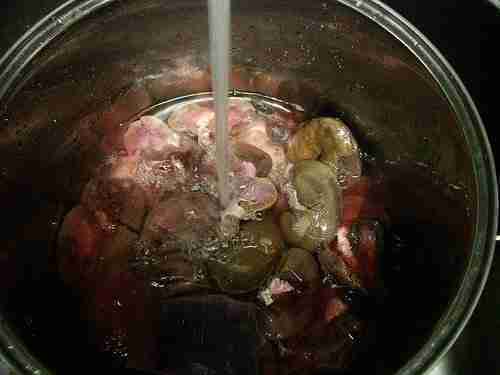 First, I soaked the kidneys in some water. I heard it’s unnecessary, but I took all precautions. Now, someone please tell me how to clean these buggers. There’s that white thing, and a few recipes have said to take them out. That’s almost freakin’ impossible. 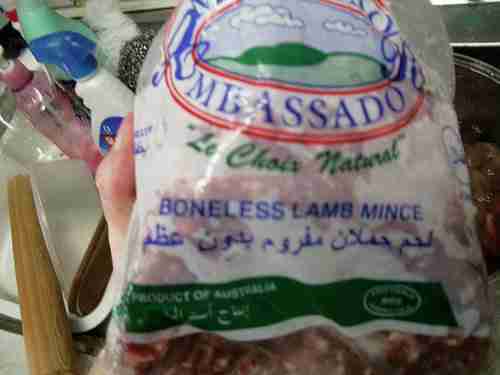 I didn’t have any lamb’s liver or other bits, but I did get some beef liver from the local butcher and some ground lamb from the Foreign Food Market. 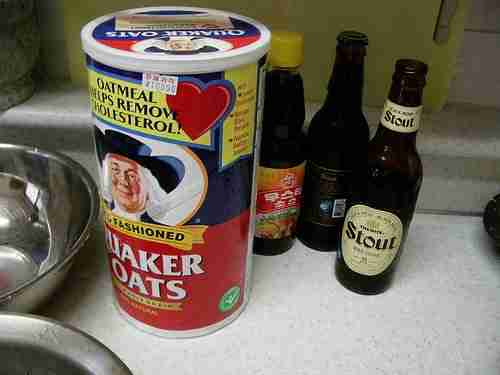 I didn’t have any whiskey on hand, so I used Hite Stout. I also used some oats (from the Foreign Food Market) and Worcestershire sauce. 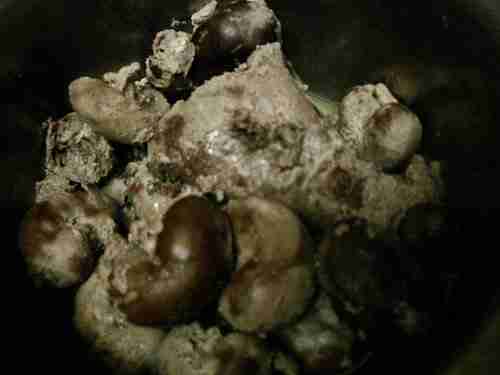 The first thing I did was boil and then simmer the kidneys and liver in water for an hour. 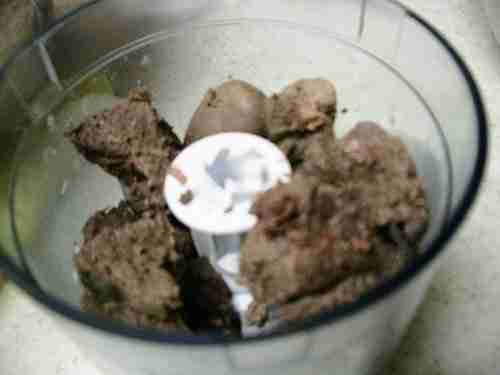 I then let them cool, retrieved them, and put them in the food processor attachment to my new stick blender. 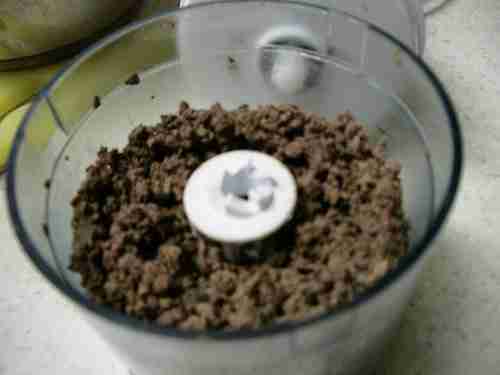 Looks slightly better now. The smell in the house, though, reeked. It was like a sheep farm. 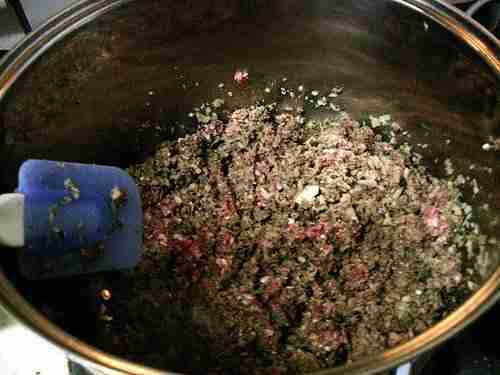 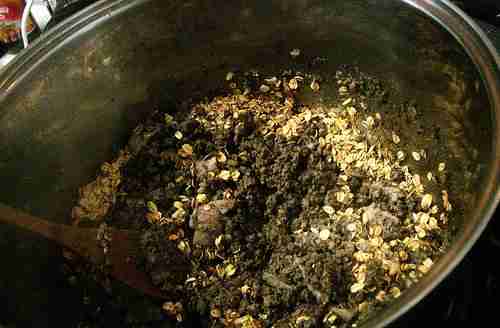 Next came some oatmeal I toasted in the oven. I also read the toasting was unnecessary. 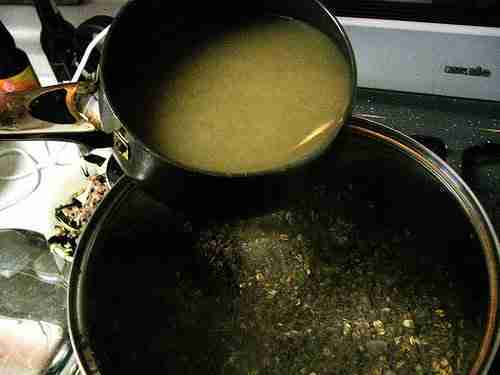 Next came some of the leftover broth from boiling the nasty bits. Just enough to cover. 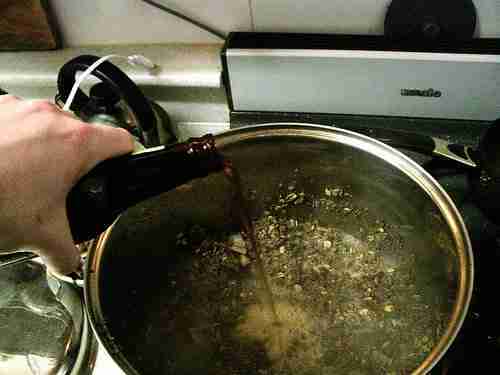 And a bottle of beer. I covered and let simmer for another hour. And this was the result. 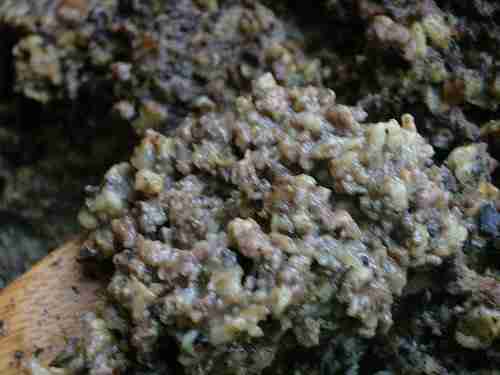 Now, since I didn’t have a sheep’s stomach to boil it in, I wanted to try a different application. I thought about making a meat pie. I hadn’t had a meat pie in a long time. But after dealing with the kidneys and all the prep, I wasn’t in the mood to get out flour and make a pie crust.

Then it hit me. Haggis is traditionally eaten with neeps and tatties (mashed turnips and potatoes). If I’m not going to make a pastry pie, I can make a Shepherd’s pie.

FOOD NERD NOTE: Shepherd’s pie is only made with lamb. If it’s made with beef, it’s Cottage pie.

I ran to the store and got some potatoes. I boiled them in some water and salt. I then discovered that my new stick blender makes some killer mashed potatoes–creamed out with milk and butter. 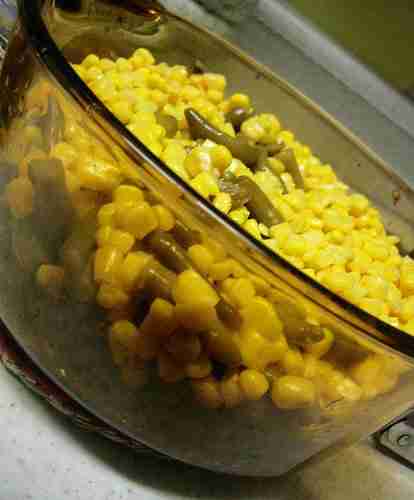 I layered my casserole dish with the haggis, a can of green beans, and a can of corn. 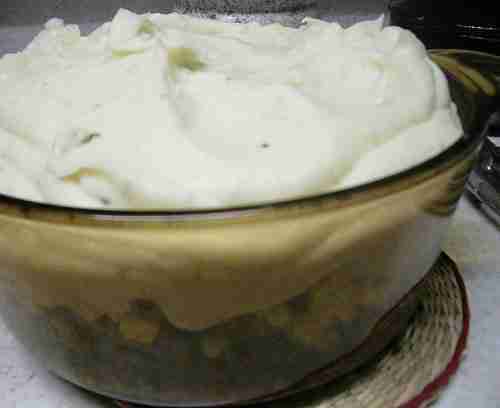 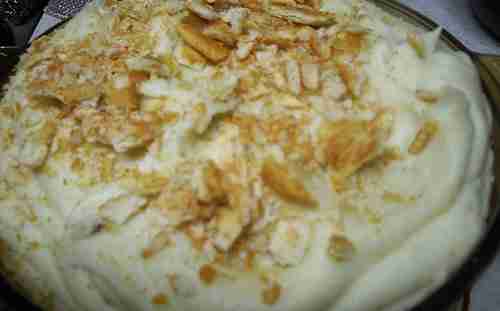 Topped it off with some crumbled buttered crackers. 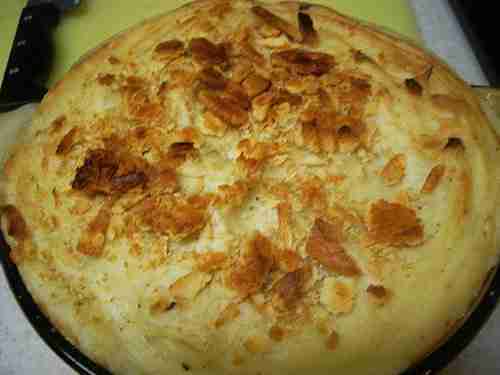 Baked it at 200C in the oven until it was golden and bubbly (around 30 minutes). 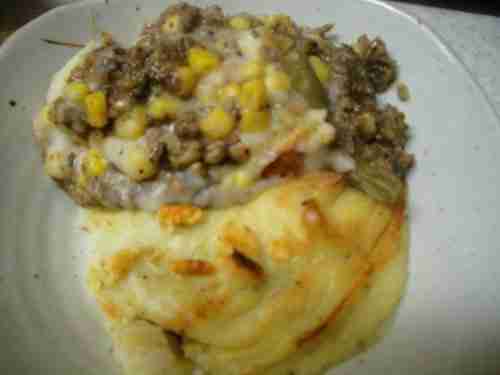 You don’t know what you’re missing out on. This was amazing comfort food. Eun Jeong didn’t touch it. So I had to eat the entire thing myself all during the week.

I’m haggised out for a while.

I have a few zipper bags of leftover haggis in the freezer. Anyone want some?