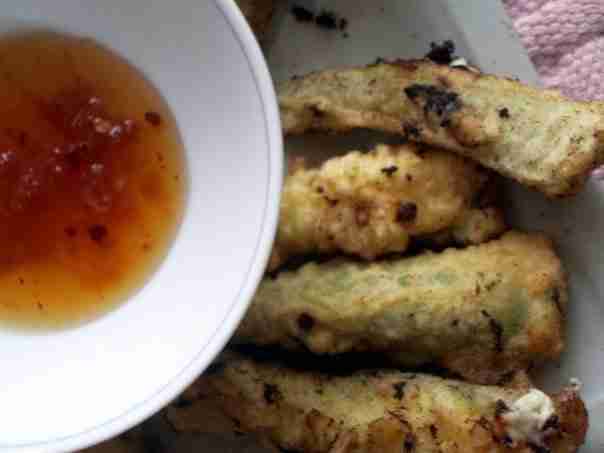 Out of all the adapted recipes I’ve written about in this column, this has to be the tastiest by far. I was surprised that it turned out so well. It’s so simple yet so addictive.

A staple American bar snack is jalapeno poppers. It’s not the same wherever you go. There are slight regional differences that determine what gets stuffed in the jalapenos and what breading to use. Some areas of the country use mostly cheddar cheese. Others use cream cheese. Some stuff with bacon. Some stuff with lump crab meat. The breading can consist of breadcrumbs, cracker meal and cornmeal.

Let’s try a Korean take on it and call them “Gochu Poppers,” using Korean peppers instead of jalapenos. The name also works well with the prurient nature many bar food and cocktail titles bear. You can find the ingredients at any big box supermarket, maybe even the local grocer. The hardest and most expensive item on the list is cream cheese. Impossible to find a few years ago, cream cheese is steadily growing in popularity. As of now, they mostly come in small tubs. A small tub is exactly the amount you need for a batch of poppers.

You also need a standard bag of Korean peppers. Try to get one with some fat boys in there so they are easier to stuff. Make sure they are fresh and not soft or wrinkly. You want fat round stiff peppers.

Enough shopping, here’s the recipe. Dump the cream cheese into a bowl and let it sit at room temperature for a while. Finely chop a clove of garlic and two fake crab sticks. Mix them with the cream cheese. You can add more ingredients and seasonings if you want to, but I feel that these simple three ingredients are a perfect match.

Split the peppers in half and remove the insides. I recommend wearing plastic gloves for this part, especially for those of us who wear contact lenses. Stuff the cream cheese mixture into each half and lay them out on a plate. Put the plate in the fridge or freezer for a while so the cream cheese hardens.

Heat some oil for deep frying. Make a tempura batter using a cup of flour, one cold egg and a cup of ice water. Carbonated water works even better. Dip the stuffed peppers in the batter and fry them until they’re golden brown. Serve with whatever sauce strikes your fancy.