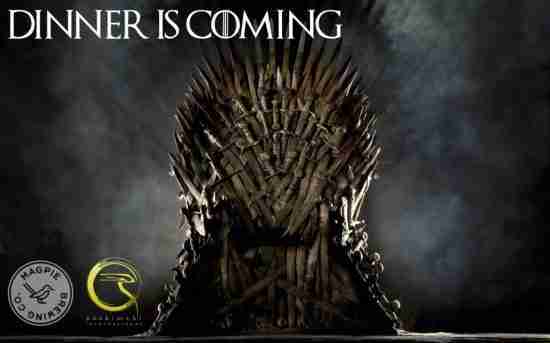 The Game of Thrones Pop-up Restaurant happened last night at Magpie Brewing Company, and it was a success. Thanks all of you who turned out for the event. As you saw, I was extremely busy the entire time either cooking or cleaning. Wish I had more time. But it seems like the food was enjoyed, considering how little we had to take home 😉

Now for nerding out. Here’s how this whole thing went down. A few months ago, before the beginning of the new Game of Thrones season, I joked on Facebook how fun it would be to do a Game of Thrones pop-up. A few minutes later, I got a message from Jason Lindley at Magpie saying that he’d set it up–calling my bluff.

We originally had planned it to go with the beginning of the season, but I had just returned from the Philippines and had not time to plan and shop. So we scheduled it to coincide with the final episode. Even then, it was hard for me to plan much. But when crunch time came, I broke down the menu, set up shopping lists, contacted folks to help, and laid out a schedule. We placed orders with Authentic Meats (the High Street Market folks) and The Baker’s Table. June Chang helped me shop and transport groceries from Costco. I did more shopping at the bakery market by Euljiro 4-ga, Foreign Food Market, Home Plus, and Costco. I also carried the major meats on my back, including two legs of lamb and two pork shoulders, from High Street Market to Magpie. In the meantime, I was transporting equipment and serving ware from my home in Anyang to Seoul via subway. The morning of the feast, I lugged a heavy suitcase filled with equipment, platters, and ducks.

With each dish (except one I forgot) I made name placards that included what house/location they were associated with and a passage/anecdote from the book where it comes from. Most of the food was meant to compliment the beer. 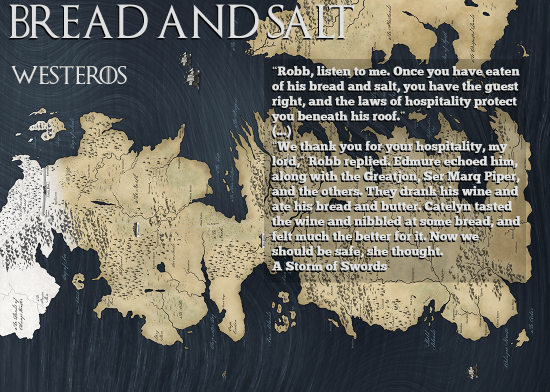 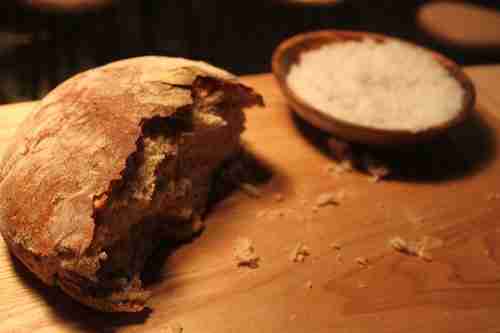 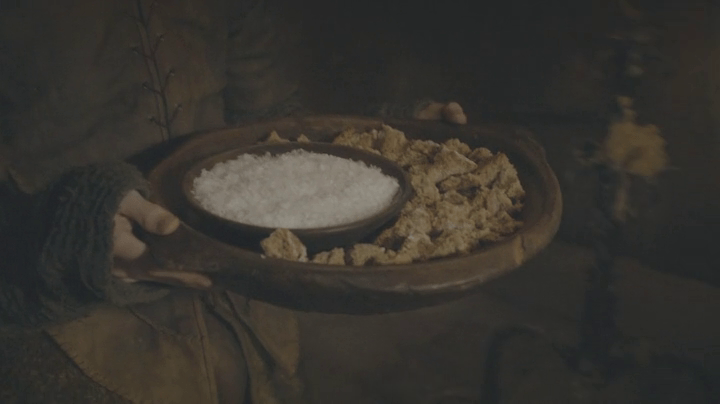 This was the easiest one to set up. When signing in, guests partake in eating bread and salt to secure guest rights. Television viewers may recall that Robb Stark did this at the beginning of the fateful ninth episode of season three. The original plan was to bake all the bread, but we had so many dishes, along with a really great bakery next door (Baker’s Table), that I included a few loaves of German bread in our order. 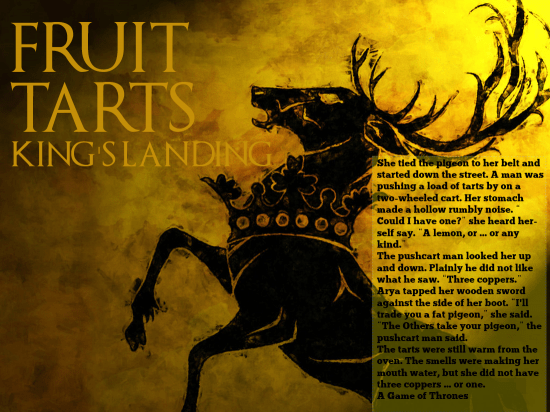 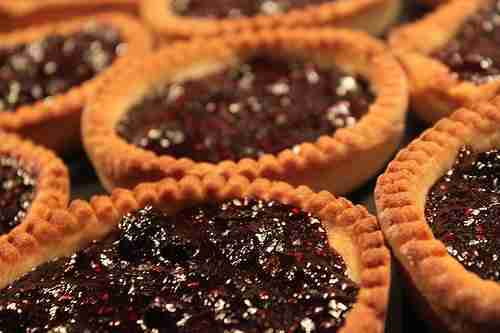 The Baker’s Table supplied us with the shells. I used some frozen berry mixes with sugar, star anise, and fresh lemon juice for the filling. We had a tough time getting the filling to set, which delayed us a bit. 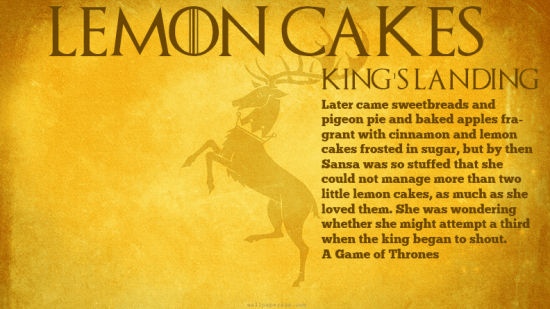 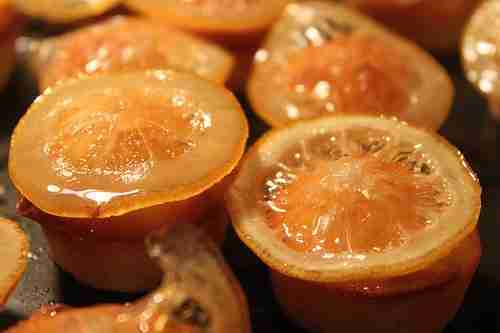 If you’re going to have a Game of Thrones event, you gotta have the famous Lemon Cakes that Sansa adored so much. This recipe I got from Inn at the Crossroads, and it’s a great one. 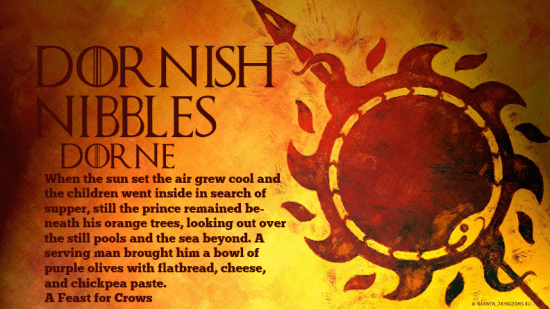 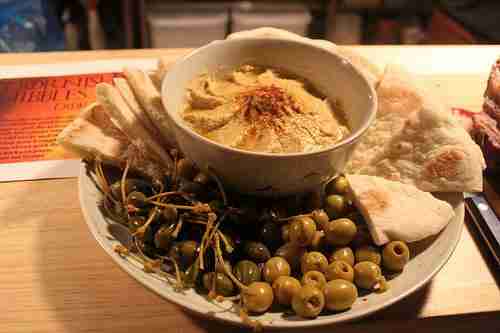 I was warned. Expats love hummus. I made the hummus at home the night before. Actually, I started soaking the chickpeas two nights before. We added the lemon juice the day of the event. One of the themes I had for this event was to have food that was somewhat familiar with flavors that jarred your preconceptions. In the hummus, I used Spanish smoked paprika to set it off a bit. The giant capers I stumbled upon at the Foreign Food Market. The bread was from Baker’s Table. The olives are some of the things I’ve been loving. E-Mart has these olives stuffed with bacon, feta cheese, and almonds (separately). So that also surprised diners. 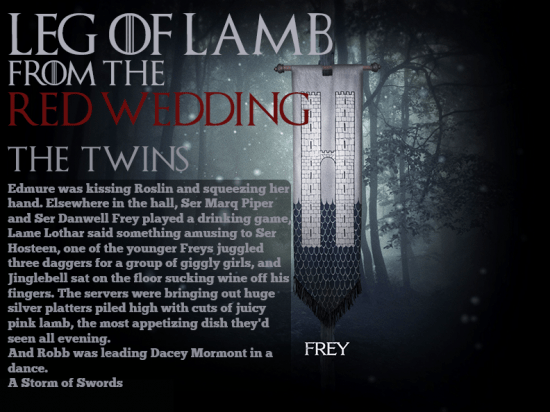 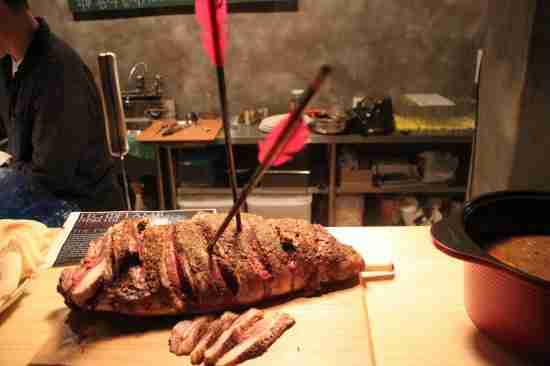 This was the big one. You won’t believe how hard it is to find arrows. I was freaking out about it for weeks, asking around. Then it occurred to me–In Insa-dong they sell lots of children’s toy arrows with suction cups on them. I bought a couple of them on the way to the office, snipped off the suction cups, and stylized the rubber feathers to make them look more feathery. The first lamb was encrusted with juniper berries, star anise, coriander, and I don’t remember. The second lamb had more traditional herbs, like rosemary, with lemons stuffed in the cracks. The lone casualty of the dinner was my hand blender. It burned out from blending so many spices, which it’s not designed to do. 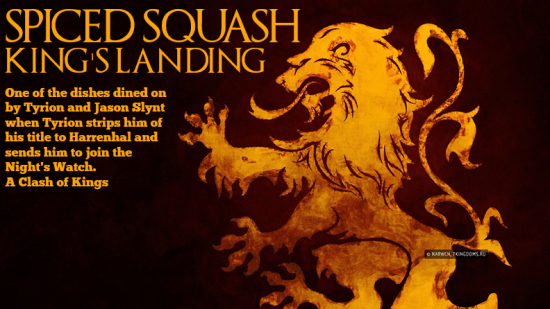 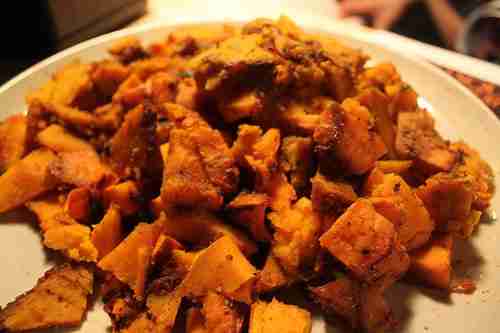 We needed vegetables! It’s hard to find veggie dishes in The Song of Ice and Fire. The Spiced Squash was easy to prepare. The dominant spices were cardamom and coriander. The squashes themselves were hard to cut, so I figured I’d roast them and then deal with them. Unfortunately, their shells got rock hard in the oven. So I had to cut each piece away and chop it up. 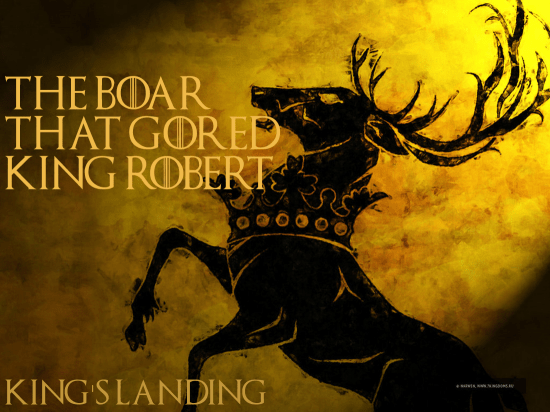 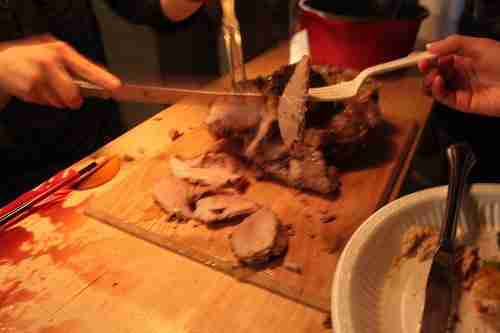 I don’t have pictures of everything. If anyone else has pics, I’d love to see them. We couldn’t get any actual boar for this one. But as Linus Kim told me, there ain’t much different between boar and pork. We made a small bending of imagination for this one. I got some pork shoulder and slapped that mother down with yuja cha and fresh basil. Roasted it along with the duck. 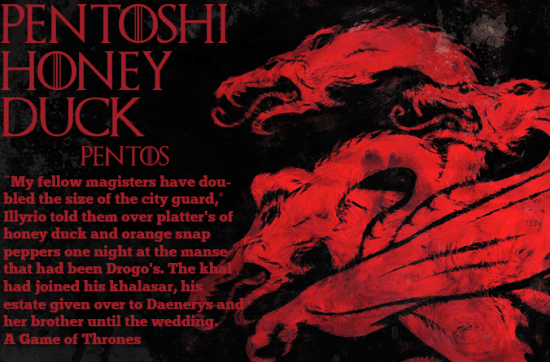 Was kinda proud of this one. It’s a simple roasted duck with honey. But the throw-off was that I used this special Thyme Honey from New Zealand. It’s a honey that makes you do a double take.

Onion Broth with Goat and Carrot 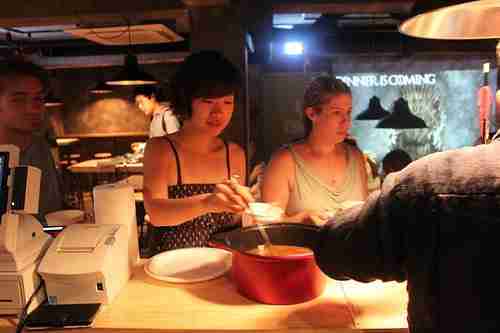 This was a very popular soup. (PHEW!) I’d never cooked with goat before. It was a basic stew with roasted bone beef broth (we roasted the bones first thing that morning) and Magpie’s Porter. It just cooked and reduced all day. The goat I got from the Foreign Food Market. 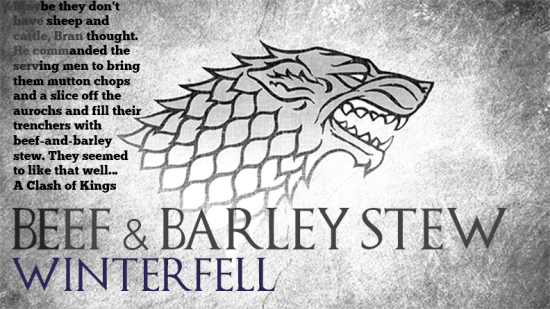 This also was an easy one. With that roasted beef bone stock, I added beef stew meat, onions, carrots. At the end, we added barley and leeks. The flavorings were from Scarborough Fair lyrics. 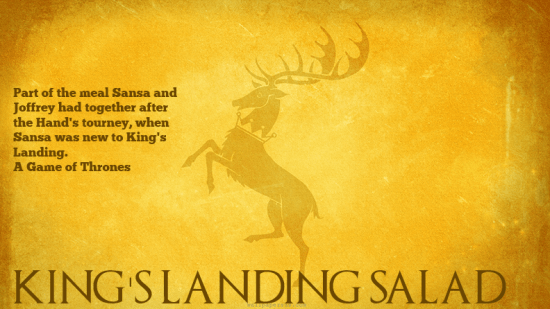 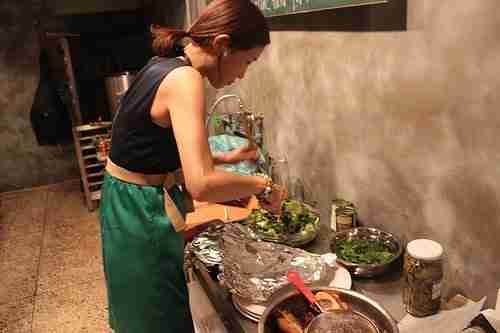 Originally called “Sansa Salad,” we were planning to have edible flowers and pomegranates. But while shopping, I changed my mind a lot based on what was available. I stewed some prunes in red wine and bokbunja (Korean raspberry wine) the night before, a take on ancient Roman cuisine. The salad was basic greens with fresh herbs thrown in, including mint, cilantro, and dill. The dressing was a yuja cha vinaigrette. This dish was slaughtered. I should have made more. 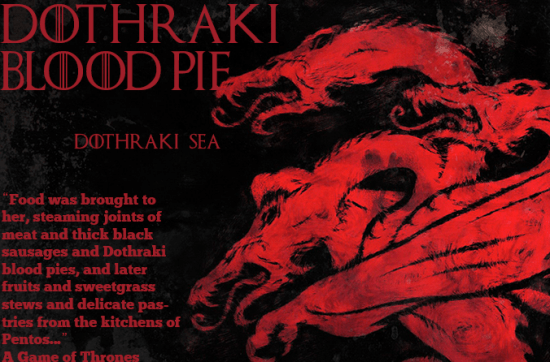 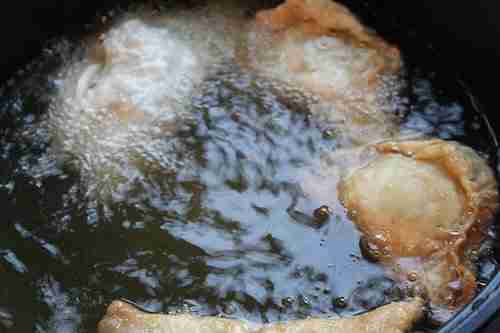 The idea I got from Inn at the Crossroads. For the filling, I was hoping to get some blood that’s used in Haejangguk. My local Home Plus had been selling it–until I NEEDED IT!! So I made do with spicy flavored soondae mixed with ground beef. For the flavorings, I leaned on curry and Jamaican ideas with lots and lots of black pepper. June turned out to be much more adept at folding the pies than me. So she and Chanju took this one over. Served it with mango chutney from the Foreign Food Market. 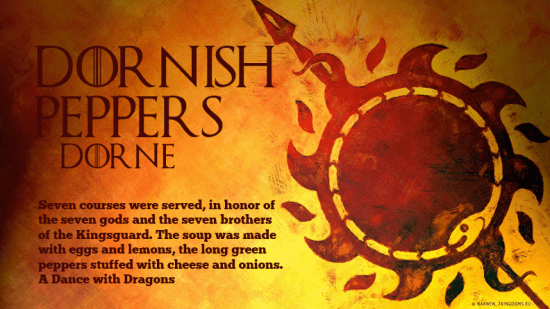 Again, I plan for something, and then the stores that carry this ingredient no longer carry it. For years, E-Mart has been carrying goat milk. I’ve been making goat cheese with it. I was planning to stuff the peppers with goat cheese. No luck finding the milk anywhere. But I had an idea while shopping. Mix some feta cheese with sour cream and butter-sauteed onions and chill it. Oh my! This was my favorite dish of the entire evening. I could eat those all freakin’ day! 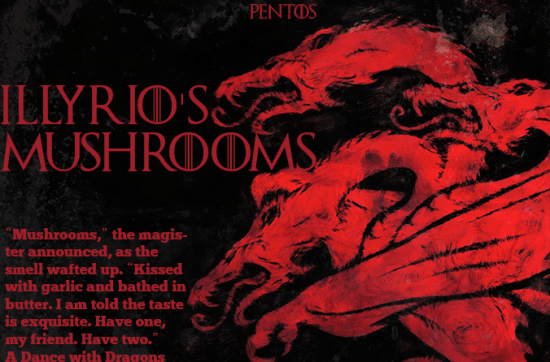 How to make butter-sauteed mushrooms more decadent? Add more butter! You know those blocks of butter that are the equivalent of four sticks? I used one and a half of them with oyster, shiitake, and portabello mushrooms. Threw in some tarragon. That was my final dish of the night, and I was exhausted. Nothing but cleaning left.

I’m still wrapping my brain around everything. Magpie was super cool with it all. I also got to try mead for the first time. Strong stuff, but I liked it.

Many thanks go to Simon for helping me cook all day and all night. June and Chanju for swooping in at the right moment to do the rest. Jason and Lydia at Magpie for hosting such a great evening. Linus and Kip for hooking me up with some ingredients. And thank you to all that arrived. Wow!