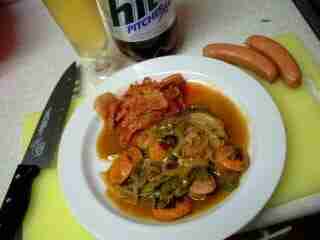 I’m always working on solutions for leftover beer. Remember that scene in Father of the Bride when Steve Martin’s character states his conspiracy theory that the hot dog makers and the hot dog bun makers got together and planned to make two more hot dog buns per package than hot dogs?

I feel the same way about Korean beer bottlers.

I’m a glutton, and I’m cheap. So I buy my beer in bulk. In Korea, we have what’s known as the “pitcher.” It’s a good mammoth sized plastic bottle of beer. This is a good and convenient thing if you like to enjoy beer out of a glass. Yet each pitcher fills a few glasses and then has a tiny bit left over. By the time I get around to pouring that last bit, the beer has already gone flat.

I used to work for a brew pub, and the head chef there turned me on to the idea of using leftover alcohol in food. This guy was classic, and I wish I kept in touch with him. The job itself was a dream job for a college student. Until the owners installed security cameras, we’d just hang out in the bar after hours and drink the taps dry. These were taps linked directly to the fresh beer vats made by our master brewer. I even pulled a Homer Simpson and drank stout straight from the tap.

Anyway, Brian would hang out with us, and when we’d go out to his place, he’d just throw crap together and make the most wonderful stuff out of nothing — and leftover beer.

Today, I felt like cooking some of those E-Mart sausages that maryeats and I love so much. I boiled the sausages in the last of a pitcher of old beer with some water to cover the rest. I then sliced the sausages and pan fried them with onions and peppers.

I then put a little of the beer water from boiling the sausage into a bowl and stirred it with some potato starch (you can find this stuff easily in Korea) to make a slurry. The rest of the beer water I poured into the frying pan after the sausage and onions formed a nice crust. Added some salt and pepper. 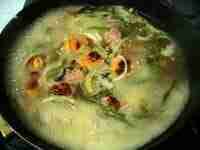 I ate it with some kimchi, which always goes well with German food.

Korean Kitchen Hacking: Honest to Goodness Popcorn with No MIcrowave