Korean Kitchen Hacking: Honest to Goodness Popcorn with No MIcrowave 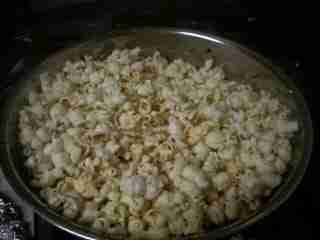 Yeah, yeah, I know you can pop popcorn in a microwave. But you know what? Microwave popcorn SUCKS!

I have great memories of popcorn, and they were all destroyed by wax coated bags burning under radioactive waves. Go to any office breakroom, and you know the smell — that nasty burnt rubber smell of blackened popcorn that lingers longer than your tech contract job.

No, let’s go back to the old memories. My oldest memory of popcorn was an old ’70s contraption that was a hot plate and a yellow plastic dome. My parents were, um, frugal. They made their own popcorn before going to the drive-in movie.

Yeah, I’m talkin’ drive-in movies. Even my younger siblings never had the pleasure of watching a movie FROM A CAR!

But, hey, I was two years old, and I couldn’t follow the plot to Emmanuel II as well as I can now.

I also remember the popcorn from the old fashioned bedpan style popcorn popper at my grandparents’ house. It was a special treat around Christmas time to pop popcorn in a fireplace. It was like we were allowed to do something forbidden. They got angry when I threw newspaper in there to watch it flame up (a nasty habit that developed into an unhealthy pyromania kick in the early teenage years). Yet I was allowed to take down the fireplace barrier and shake a pan on a stick in the fireplace — and make food!

My dad, at one time, tried his hand at making popcorn on the stovetop by using just a frying pan and oil. The result was the loss of use of his right hand for two months due to burn therapy. Traumatized my little sister, too.

Fortunately, Alton Brown has demonstrated how to do this safely at home on the stovetop. And likely, those of you in Korea already have all the instruments necessary.

If you go to your local corner Ajossi Mart, you may notice a bag of real unadulterated popcorn next to the microwavable bags. This popcorn usually has a picture of Donald Duckâ„¢ on the bag. 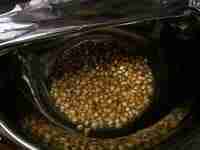 At home, get a stainless steel bowl. Put in around a tablespoon of oil with a handful of popcorn and some fine salt. Cover the bowl with aluminum foil and punch holes in it. 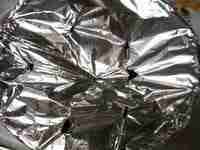 Then shake it on the stove with tongs over medium heat, and it’s magic.

Me? Hell, you know I ain’t a purist. Not only did I put butter in my popcorn, I used ghee (clarified butter) from the Pakistani International Grocery Store in Itaewon.

7 thoughts on “Korean Kitchen Hacking: Honest to Goodness Popcorn with No MIcrowave”