There is just something glorious about pork.

A few months ago, I joined Brant and Terra at a German restaurant in Itaewon. I used to live in Germany, and I have a special fondness for German food and beer. I ordered this MegaMeat platter which included, of all things, a boiled Eisbein (pronounced “ice bine”). 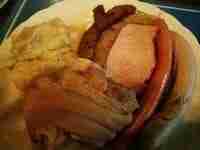 Eisbein is basically a pig’s foot. I was so surprised by how divine this thing tasted — even when boiled — that I had to try this myself.

She had seen enough of my failed kitchen experiments, especially since the purchase of the oven. I had made my mom’s chicken and dumplings. But I made a batch for a family of six for a small couple. I made corn pudding, only to remember that I didn’t like corn pudding. My early revival attempts at baking have resulted in biscuits, focaccia, and croissants that would make fine building materials.

So, there ain’t no way she’s gonna let me bring some pigs’ feet into the house.

She went to visit her mom this weekend.

The first thing I did upon returning from Japan was buy a nice foot o’ hog.

Now, I’ve noticed right off that expensive items in one country are cheap staples in another. For example, beef, cheese, and soup bones are very expensinve in Korea, but cool fancy mushrooms, fresh garlic, and squid are cheap, cheap, cheap. Thankfully, pigs’ fett are as cheap in Korea as they are in America.

Don’t be frightened of the pig’s leg. They’re thoroughly cleaned. And they contain everything that makes pork so great: succulent meat, bacony fat, and crispy skin. It’s all concentrated to the Nth degree.

The trouble was that the lady at the butcher stop asked how I wanted it cut. I indicated that I just wanted the cut at the ankle. She went to the back and handed it to one of the butchers and told him what to do. 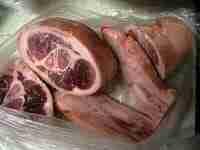 I ended up with it cut into four sections with the foot split. That actually was a blessing in disguise because it gave me the opportunity to try to make them in two ways. 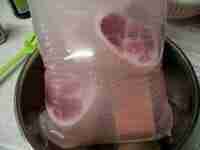 First, I brined them overnight in a large zipper bag in water mixed with a small handful of salt.

German Eisbein
With the largest portion and one of the foot halves, I made a roasted Eisbein. This was the simplest one.

I noted at the top that I use an oven for this. The reason is this entry is in the Food For Foreigners category. The two rules I try to follow for FFF are the following:

1. Use what typical foreigners have available in Korea, meaning no ovens or food processors.

2. Costco is cheating. If you can’t find it in Podunk-san then it’s useless to the average foreigner who doesn’t live in Itaewon, doesn’t have a Costco account or doesn’t have a military PX connection.

Forgive me for using an oven on this one. If you do happen to have one, you can do this recipe. 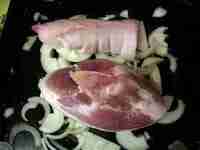 Basically, I removed the pork hocks from the brine the next day and placed them on a bed of sliced onions. Now, I did make a mistake that I don’t want you to make. Onions have a lot of sugars, which makes them great for caramelizing and making foods taste sweet. This also means that they’ll stick like a mother to your baking pan after a good few hours of roasting. Protect your baking pan with a sheet of aluminimum foil first.

I put them in the oven at a little under 200 degrees Celsius. I roasted them for around three hours. 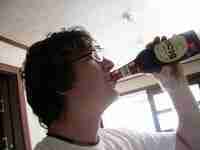 I poured a little Hite Stout over the feet to baste them every thirty minutes. Around fifteen minutes to the end of cooking, I pumped up the heat to around 220 degrees Celsius to crisp the skin. 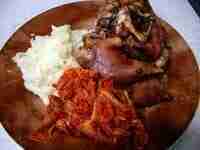 The result was remarkable. Served with some mashed potatoes and kimchi. Kimchi tastes great with German food, by the way. Decent substitute for sauerkraut. Had a little mustard as a condiment. Good classic hearty German cooking.

Now, if you don’t have an oven and want to do a German Eisbein, you can boil it in water with some salt and vinegar, or even better, some chicken stock. That goes great with kimchi and mustard too. It’s basically what they served at that German restaurant in Itaewon.

Mock French Laundry Trotters
I got the basics and techniques for this one from a former cook at Thomas Keller’s The French Laundry (thanks, ChefJohnny). I followed it in spirit since I didn’t have everything available that he used. I also was too lazy and hungry to roll them up and make them look like nice neat little nouveau cuisine packages (besides that’s so ’80s). 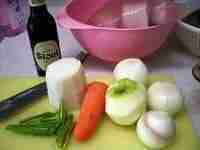 I got out my basic hardy vegetables for the mirepoix. This basically was stuff in my refrigerator and shelf that I had to use up before they spoiled. This included a daikon radish, some Korean peppers, one of those big ass Asian carrots, some onions, and a green apple. 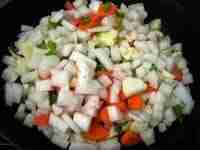 I chopped them up and sweated them in some olive oil. “Sweating” means that I cooked them gently without much sizzling and no browning. 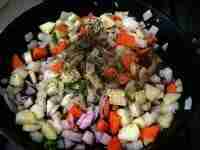 When the onions got a little clear, I added the aromatics. For this one, they included some fresh ground black pepper, whole allspice, whole cloves, a cinnamon stick, and what was left of my poor rosemary plant. I added some red wine. ChefJohnny said to use white wine, but I only had red in the house.

I slowly cooked it until the wine and moisture were almost gone from the pan. This required a lot of vigilance to make sure it didn’t go too dry and burn everything. 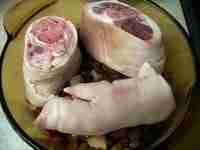 I transferred the veggies to my pyrex casserole dish. Placed the piggy feet on top. 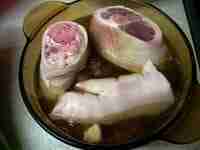 Covered them as much as I could with hot chicken stock. I then covered the dish and put it in the oven at a little below 200 degrees Celsius.

Now, I’m not sure about this, and someone please help me with this notion. For people who don’t have ovens you may be able to do something similar on the stovetop by stewing the pig’s feet under very low heat in a large pot.

UPDATE: Chef Johnny says, “Thats totally do-able. I’ve done it before when all of our ovens were full. Just keep the flame low and keep a close eye on it.”

Back to the oven technique.

I braised the pig’s feet for eight hours. 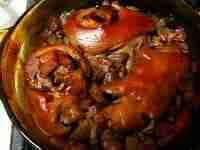 Slow cooking, man. The smell in the apartment was un-freakin-believable! 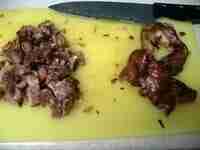 I removed the feet and deboned them. The bones came right out, really. I had to do this before they got cold because they had so much gelatin, they could get too hard to handle. I also was meticulous at weeding out the little toe bones. I then separated the skin from the meat. 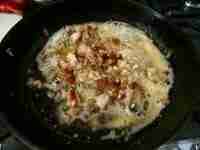 I chopped up the skin and fried it in butter. The skin violently popped in there. Have a grease screen or a pan lid at the ready. The result was the most amazing crispy bacony bits of heaven. I mixed the crispy skin (cracklin’) back with the meat. 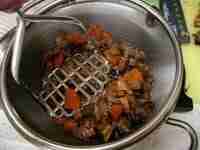 There was still some goodness in the casserole dish. I strained the braising sauce and used a potato masher to squeeze out as much as I could. 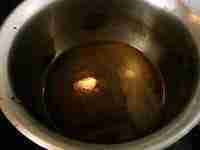 I then reduced the sauce on high heat until it was a little syrupy. You know, coating the back of a spoon and such. 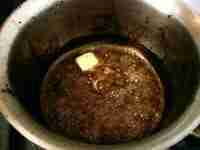 Towards the end of the reducing, I added a hunk o’ butter to smooth it out. 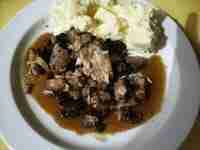 This has to be the greatest thing I’ve every cooked. It’s possibly the best thing I’ve ever put in my mouth! It was hard to return to regular food when I had finished it all. The pictures don’t do it justice. You just have to try it. I’m definitely doing this again.