I’ve mentioned before that the W Hotel Walker Hill in eastern Seoul would be my regular hangout if I struck it rich.  It’s modern but cozy.  It’s elegant but not pretentious.

I got introduced to the W last year with the famous X Burger.  Since then I have been keeping up with Ciaran Hickey’s madness in the kitchen, secretly fusing Korean ingredients in his world class cuisine.

This is one of the conundrums in the Korean gourmet scene.  Koreans want food that is high class, but they have trouble with thinking of their own food in the same category.  Chef Hickey has been trying to tell his bosses and his Korean clientelle that the nouveau French cuisine they love so much is really rustic peasant food tarted up a bit.

And Korean traditional cuisine is the glorious Asian provincial food that is begging for this treatment.

I was excited to be invited back to try the W Seoul’s new Contemporary Korean Menu, along with my cohort, Fatman Seoul’s Jennifer Flinn.

Thanks to the only taxi driver in Seoul who obeys traffic laws, I missed cocktail hour, but I did make it in time for the first course, served with a bubbly glass of dry spumante “Opere Brut” from NV Villa Santi in Crocetta, Italy.

What was the first course, you say? 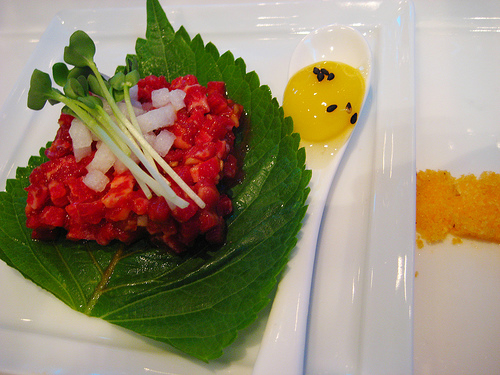 On the menu it said “Beef Tartare,” but it was actually Korea’s formidable contestant in the world of high class cuisine, Yuk Hui 육회.

I said this once, and I will say it again.  Korea’s Yuk Hui beats the pants off of any French Steak Tartare.  It was perfectly executed.  Finely minced beef (not ground) mixed with fruit and bright Korean flavors, including Korean pear.  It came with a delicate but protein-laden quail egg yolk on a spoon, which I mixed with my beef salad.  The yellow “sand” on the sides was a Korean sea salt, which made a nice little accent to dip the tip of the spoon in to add a little surf to the turf. 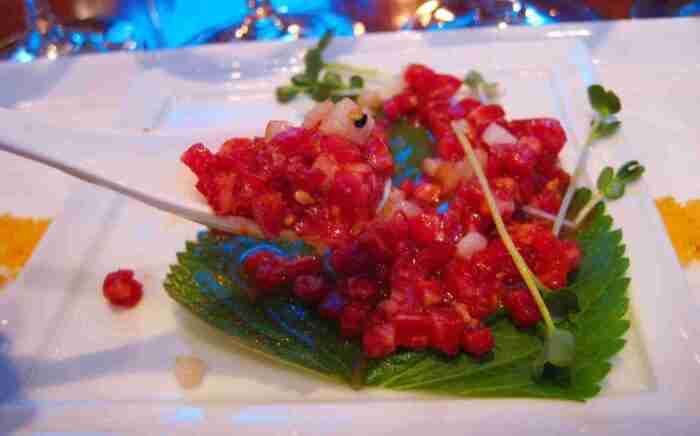 This chilly dish was the perfect way to start a summer meal.  If you think it looks molested here, by the end there was not a morsel of meat left.  Jen commented that it was the most Korean of the dishes and least altered from traditional Korean technique.  I think that this was the point.  Chef Hickey was firing straight off that Korean cuisine belongs on the mantle of world class cuisine without much fussiness.  Eun Jeong made the comment, while looking at the pictures, of how pedestrian the presentation was.

I’ll leave it to you, the reader, to decide.  In my mind, a Korean who has grown up with this would find the sesame leaf and sprouts fairly commonplace.  Yet a westerner would find this an elegantly delicate presentation.  My only regret was that the wonderful licorice essence of the sesame leaf wasn’t somehow incorporated in the dish beyond being the palette for display.

Nonetheless, this was obviously a summer menu.  With how much Korea emphasizes its seasonal nature, I would beg the W to continue this menu to match the other three seasons. 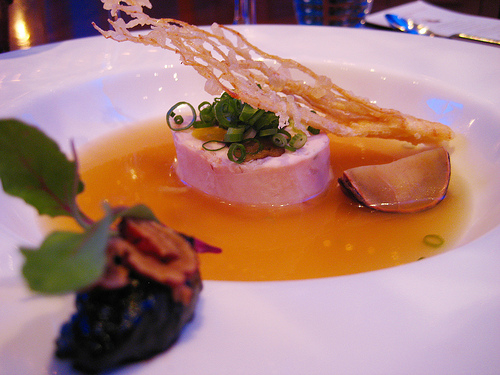 The next dish was just plain clever.  You see, the fun of this menu was guessing what Korean dishes the courses represented.  The menu didn’t give any hints.  It sounded like what you’d find at any contemporary restaurant, where you’d get a vague list of ingredients with no actual dish names.

So, let’s see.  This is obviously a chicken soup, but the broth is, as Jen said, “medicinal.” Take that in a good way.  It used traditional Korean medicinal herbs and woodsy stuff to create an exotic earthy broth.  In the middle was a chicken breast tournedo, stuffed with Korean dates, nuts and more surprises.

Okay, it’s Samgyetang.  But this time it’s a gorgeous quaint stuffed chicken breast instead of a whole stuffed chicken.  Befriending it was a sliver of chestnut and a lightly tempura’d ginseng root, which I just picked up and ate with my fingers.  The little black stuff in the foreground was the mystery substance.  Jennifer found that it was ground black garlic.  This is garlic that has been aged in caves until it’s oxidized.  Tasted like raisins to me.  Yet it cut through the surprisingly rich broth to create balance.

The broth wasn’t the only surprising part.  Chef Hickey said a while back that the most challenging part of attempting high scale Korean cuisine is matching it with wines.  What wine could you possibly match with a woodsy medicinal chicken soup?

A German Riesling with a dry finish.

Does one actually exist?

Apparently so.  We had a refreshing 2007 riesling from Dr. Loosen of Mosel.  The wine screams summer. 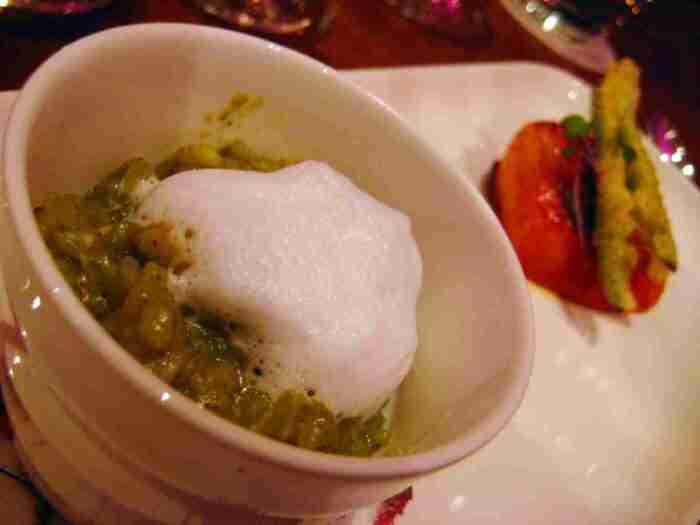 To say the risotto was the least memorable is unfair.  It’s a nicely executed risotto.  Creamy and chocked full of tender abalone, which turned the rice green, and topped with a little “sea foam” of milk and basil.  I just felt it needed a little more punch of seasoning to bring the shy abalone out of hiding.

Then again, it may have existed to counter the powerhouse that was the fish.  I can’t believe I’m getting all this worked up over a tiny cut of fish. 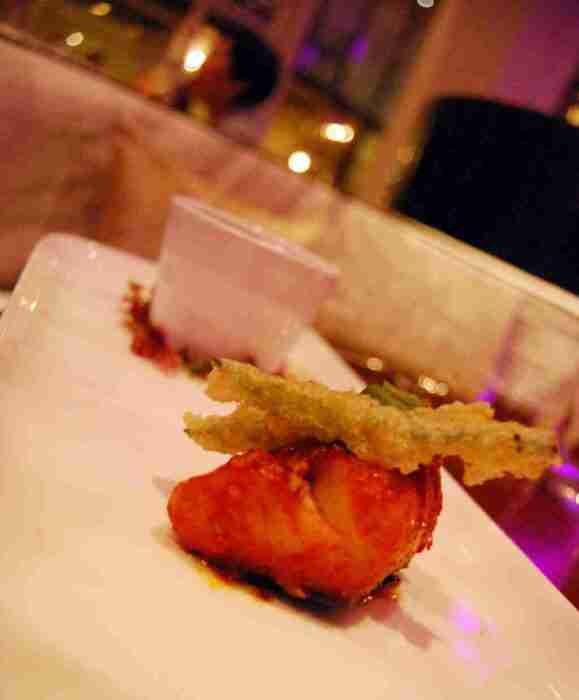 This, my friends, is a sneaky little bugger.  I’m biting the skin off my thumb as I look at it.  What they did was so simple but so perfect.  They marinated this rich flaky fish in a special dark gochujang from Sunchang.  I found out from Eun Jeong that the dark gochujang I’ve been raving over in our fridge also comes from there.  How to explain… 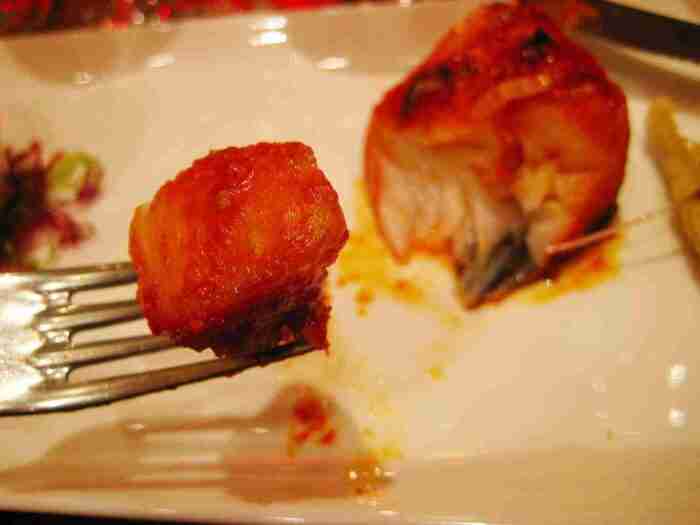 This red pepper paste has such a dark sweetness it’s like coffee.  Now smother a flaky and slightly oily fish with this and grill it just enough so that it’s still delicately wet in the middle, and this is the fish.  I know it sounds sexual, but it was sensory overload.  For extra decadence, it was topped with garlic stem tempura.

That fish was strong and stayed with me for a good while.  A California white, Bogle Vineyards’ Chenin Blanc, 2007, kicked it back in its place.  After three glasses of wine, things were getting a bit sloshy by then.

The next wine created a nasty scene (almost NSFW).  It was our first red of the evening, and the perfume it gave off was intense.  It was 2006 Daniel Rion & Fils Bourgogne from, well, Bourgogne, France.  Jen said she wanted to wear it.  She then commenced to treating her wine glass like a bong.

As fragrant as it was, the actual taste contrasted with it greatly.  Solid and oakey.

I should also note about how I prefer the atmosphere of the W.  It’s not stuffy.  The colors are abstract and enveloping.  There’s an entire wall of shifting light hues.  Combine this with a restaurant soundtrack that ranges from ambient electronica to Ella Fitzgerald, you are transported to a dream world where your senses are recalibrated. 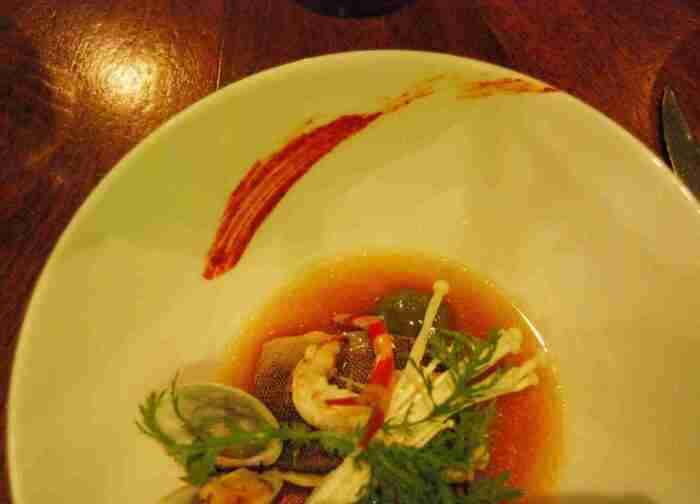 It was then we got a new soup.  Chef Hickey had found one of the secret treasures of Korea after monkfish.  Yes, monkfish, as much as it’s prized out of the price range in New York and Europe, is still pretty cheap here.  What Chef Hickey threw in this dish was the Jeju Langoustine.  They’re shrimp with big ass claws, almost close to a crawfish.

The langoustine resting atop the Nollemi 놀래미 (translated as “hog fish,” but I like the Korean word better), was creamy, like eating shrimp butter. 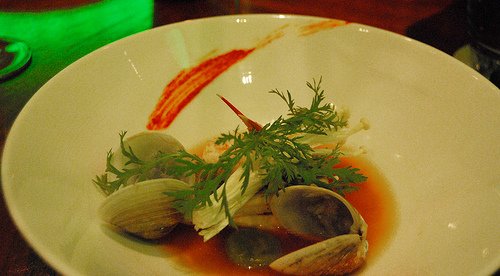 This is the crux.  It’s where Korean instinct stubbornly battles fresh approaches.  This seafood soup is a clarified version of a Maeuntang 매운탕 or Haemultang 해물탕.  These are traditionally served boiling.

Koreans say it’s to cover up the flavor of the seafood.

Maybe it’s to cover up the flavor of bad seafood.  This goes to the root of my criticism of Koreans’ approach to the wonderful bounty that surrounds them on three sides.  They destroy the natural flavors of these morsels and don’t let them live on their plates (unless they’re live octopi).  They disrespect their ingredients.

I get what Chef Hickey was thinking.  He had experienced a Haemultang somewhere and was intimidated by the boiling mess but loved the flavor.  He distilled the flavors into a spicy Bouillabaisse and danced little clams, fish and the creamy langoustine on its stage with enokitake mushrooms and Ssukgat, the bitter herb that brings Haemultang together and makes it distinctly Korean.  The only criticism I have for this is that a straw wasn’t provided for the broth.

By then I had gotten a Busan fish market full of seafood.  I needed to cleanse the palatte.  In galbi restaurants, they usually give you a cinnamon-laced persimmon punch to wash the garlic from your tongue.

Fuck it.  Make it sherbert.

Yeah, he froze that little cinnamon punch.  It came with three minute mint leaves for garnish on the plate.  But mix the mint with the sherbert and you got somethin’.

We needed the little breather there because big red was coming.  The meat, meat, meat course. 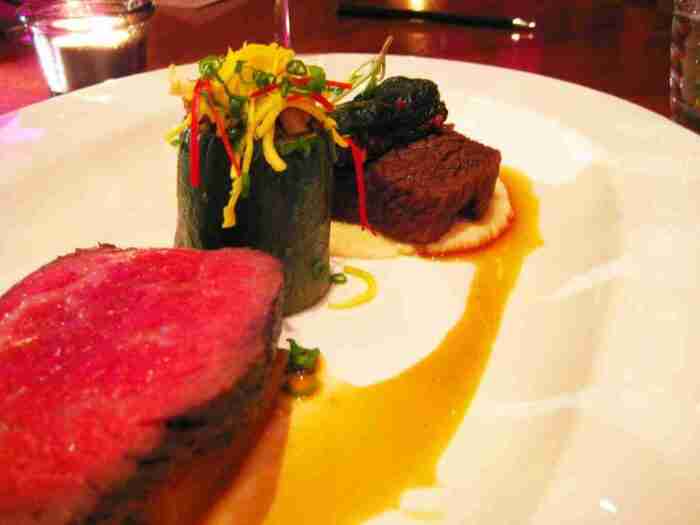 This really messed with my loyalties.  On the left was a galbi-style marinated Hanwoo sirloin.  As you can see, it was barely seared, with the jus skimping across the plate.  On the far end was galbi jjim–a slow-cooked short rib that was just plain classic Korean cuisine, topped with a yeolmu kimchi.  In the middle was a meat-stuffed zucchini.

Why were my loyalties torn?

It admittedly got me a little emotional.  The stuffed zucchini tasted just like the type of treat I get in my lunch box courtesy of Eun Jeong, my wife.

The slow-cooked short rib on a bed of potatoes and todok tasted just like my much missed grandmother Beba’s beef and potatoes.  Comfort food from two women close to my heart.

Oh yeah, the sirloin was good, too.

The wine was a much heartier “Uncut Shiraz” (I guess that means Gentile), 2007, from Gemtree Vineyards.  Good stuff. 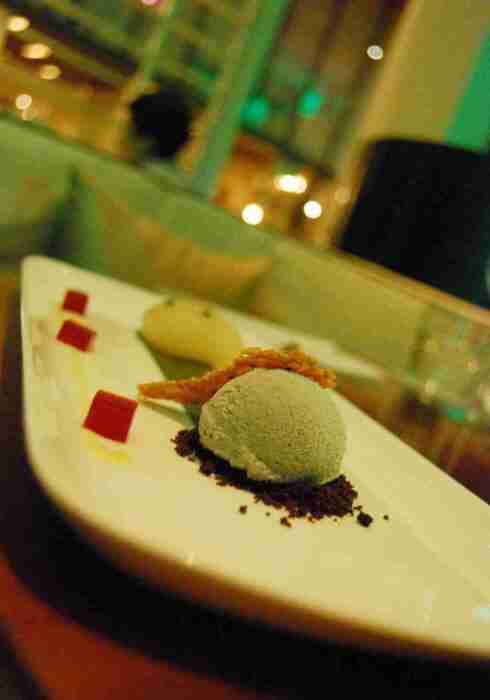 Dessert was a special gift for adults only.  Black sesame ice cream on a bed of crushed housemade “Oreo”-style cookies.  Dark and forbidden.  Pair this with an Asian pear poached with black peppercorns, and you have a dessert that the kids just won’t get.

Screw them.  They aren’t paying.

The little cubes were jellies made from Bokbunja, the Korean raspberry liqueur, on top of a little vanilla smear.  If only Lotte could come out with a black sesame ice cream, is all I can say. 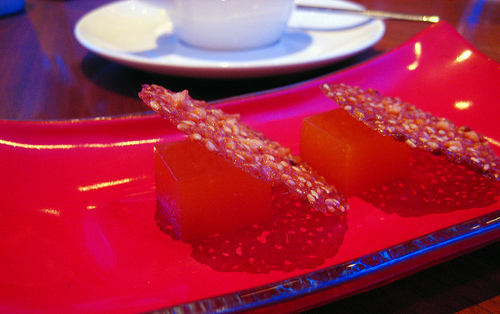 Dinner wrapped with coffee and little petit fours of Jeju halabong orange jellies.  Chef Hickey found them while vacationing and was dumbfounded by their flavor.

I wasn’t given the official tally of this meal, but I’m pretty sure that, with wine included, it was quite the six-figure KRW affair.  Nonetheless, I would pay the full price for this meal just to have that fish again.

I met a few cool folks, including Naver “Power Blogger” Kim Bum Soo of Pat2Bach (his take on the meal) and Sunsook Koo of DesignHouse.  Drank a good bit of wine, but the evening was far too short.

I just gotta head my way out there again.  The W is a great place to really relax and enjoy yourself.  It’s stylish.  The people are gorgeous.  And the food will take you to another world.

Dealing with Dinner for International Couples

17 thoughts on “Classic Post: Contemporary Korean at the W”