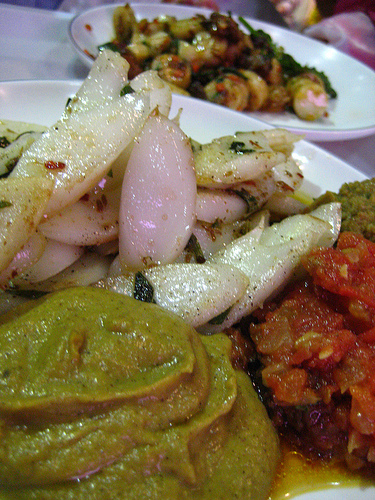 Earlier this year Chef Rachel Yang of Joule in Seattle wowed the audience of the Ddeok Festival with her cooking demonstration.  This was her appetizer, Ddeok Moussaka with Tomato Marmalade, Eggplant Caviar and Caramelized Zucchini.  She explained it’s “basically deconstructed moussaka with rice cake.”

The picture doesn’t give it justice, but I tried it, and all was good with the world.  If you’re looking for creative things to do with rice cake, she has been generous enough to share her recipe with us.

Some of the ingredients are a little hard to find in Korea.  Cumin is more common in grocery stores than it used to be.  It’s also at the international grocery stores in Itaewon, Dongdaemun and Ansan, along with whole nutmeg.  Fresh thyme and oregano are much more difficult to find–as in, I’ve never seen them.  But you can get fresh parsley and maybe substitute the other herbs with sesame leaves or used the dried versions.  Also you could maybe substitute the sherry vinegar with balsamic vinegar.  Note that these are my suggestions and haven’t been officially endorsed by Chef Rachel.

12          Tomatoes, medium  beefsteak or large plum varieties (beefsteak is the common one in Korea)

For the rice cakes:

For the tomato marmalade:

For the eggplant caviar:

For the caramelized zucchini: 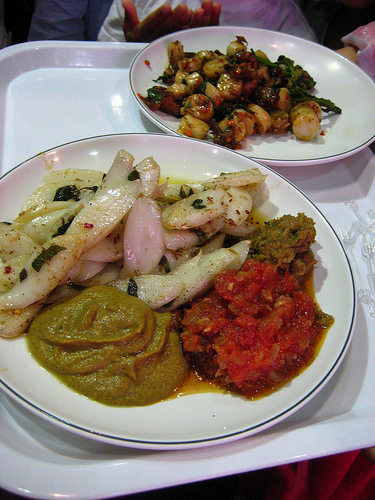 If you’re ever in the Seattle area, make sure to check out Joule Restaurant.  Rachel Yang will be on Iron Chef America on January 17th (source: Seoul Eats).