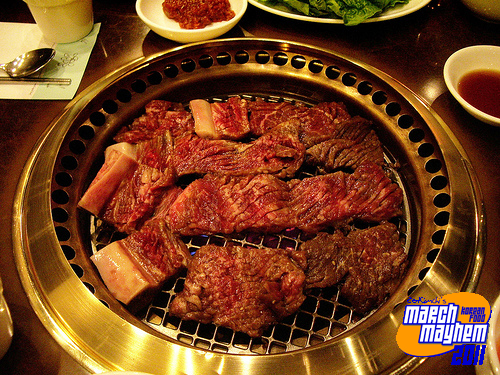 Ladies and gentlemen, we have a champion!

Suwon Galbi is the winner of ZenKimchi’s March Mayhem 2011. It had been a long arduous battle that ended close with just a 3-point spread. They are celebrating in Suwon tonight!

“I can’t believe it! It’s a dream come true. Mom! We won,” cried Suwon’s star player So Go-gi. “We couldn’t have done it without our fans.”

“Jeonju Bibimbap made a strong showing and progressed to the finals for the first time ever, only to suffer a heartbreaking defeat.

“We did our best and put up our top game, but Suwon posed a tough challenge. There’s always next year,” said Jeonju coach Go Chu-jang.

The final score was Suwon Galbi 16 and Jeonju Bibimbap 13.

This caps another exciting year of Korean Food March Mayhem. Sixty-four teams competed this year in four divisions, Modern & Fusion, Traditional, Fun & Funky and Classics. The old school dominated, and it was a battle between the Traditional division’s Jeonju Bibimbap and the Classics division’s Suwon Galbi. Modern & Fusion’s DalkGalbi took third place in its game against Fun & Funky’s Mandu.

For scores and brackets showing this year’s jaw-dropping games, go to the main March Mayhem 2011 page.