The success of the Korea Cafe Fair, held in the tail end of winter the past two years, seems to have motivated the COEX convention center to start organizing their own effort, the Seoul Coffee Expo. I, on behalf of ZenKimchi, was on hand for the first annual expo.

“Why fix what isn’t broken” seemed to be the mantra for the expo organizers, as it was remarkably similar in format and even layout to the Cafe Fairs of the past. This isn’t necessarily a bad thing though, as the Cafe Fair is generally a Mecca-like experience for Korea’s coffee lovers.

Make no mistake, the point of the Coffee Expo (and the Cafe Fair as well) is making business deals. As such, the expo is closed to the public the first two days of the event. Then on Saturday and Sunday the floodgates are opened to the general public. 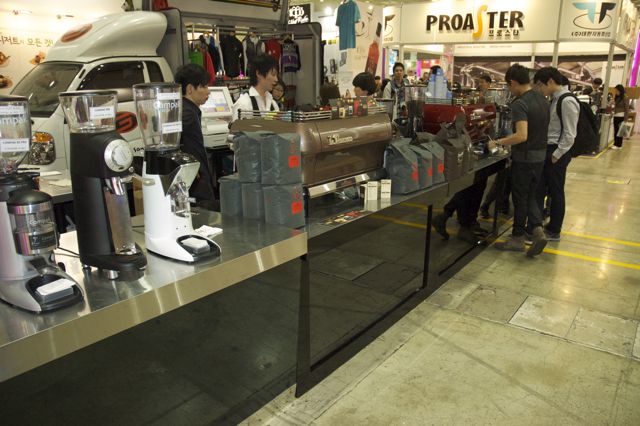 Inside is a veritable who’s who of Korea’s coffee industry. Various coffee supply resellers are there  and, although ‘officially’ there is not supposed to  be any sales going on on the floor of the convention, there are plenty of places to find a great deal on whatever you’re in the market for. Personally, I picked up a lovely IMEX home coffee roaster that I’ve been getting a lot of use out of ever sense at a substantially discounted price from anywhere I’d seen online.

For those not ready to delve into the world of home roasting, you’ll find your standard pour over (hand drip) supplies, beans, thermometers, coffee mugs, etc, etc. This year I saw the Aeropress (what I use for my daily morning coffee) being sold at a few different booths and I even saw a Clever coffee brewer (a tweak on traditional pour over coffee that is, by most accounts, far easier to get right). I never saw a Chemex, however, which is something I was on the lookout for.

Yes, there are good deals to be found, but the main reason for going isn’t to save a few bucks. No, the main reason to go is to save A LOT of bucks by indulging on all the free coffee and espresso samples that you can handle.

I highly advise anyone attending one of these future expos to stick to the espresso samples for two reasons:

Indeed, my pick for the top espresso of the expo came from the same place as my pick for the Cafe Fair, made from 49th Parallel beans by Cafe Sedona (Just happens to be permanently located in the COEX complex):

While the Cafe Fair in the winter was bigger and had more places giving samples (including teas and juices, by the way), the crowd for the the Coffee Fair was much smaller and easier to navigate (although I attended on a business day, so I can’t speak to the days it was open to the public).

Although the Coffee Expo isn’t exactly breaking new ground, it’s a winning formula and gives Korea’s coffee lovers two chances a year to enjoy the festivities. With deep discounts on accessories available and the ability to drink coffee until it’s coming out of your ears, it’s a can’t-miss event for any coffee drinker in Korea.