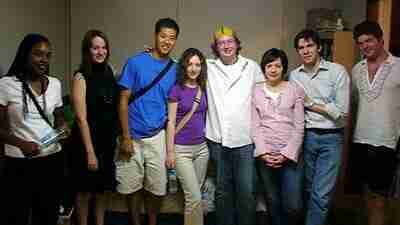 As far as my intelligence reports, there are currently three Korean food bloggers in Korea. Currently. This was a historic occasion, getting all of us into the same room.

It started, as many of my endeavors, with me being very, very naughty. Colin had been talking about us getting together in Anyang for drinks during Chuseok week. Then Eun Jeong mentioned she was going to her mom’s house in Gyeongju for the holiday. Since she was leaving, I thought I’d have a little get together and hope she wouldn’t find out. Mary, from mary eats, had suggested we have something like this at some time.

You see, Eun Jeong is not anti-social. She just has been worried about people seeing our apartment while it is still in a semi-moved in state. Until this week, we still had boxes in our living room because we didn’t have containers to put everything in. Now we do.

Yet I can’t hide anything from Eun Jeong. When she said she may stay here during Chuseok, I told her about the get together. She said it was okay. She was cool with it.

I intentionally did not call this a party because I didn’t want the pressure of having a party. It was an informal ‘get together.’ Nonetheless, I had to get some food. And since it looked like all the Korean food bloggers and Cat from SeoulLife were showing up, I couldn’t get away with chips and dried squid. Besides, I had the oven.

On Thursday, Eun Jeong and I put our heads together to figure what we could cook. Just in case I couldn’t make enough, I put the call out to everyone to bring drinks and possibly food. I decided to use the duck I had gotten from a new local butcher.

So I had a duck, and Eun Jeong didn’t think she and I alone could eat a whole duck. So that took care of one part of the party.

I also experimented with a bread called Pain a l’Ancienne. It’s a fairly new technique from France that uses ice water and refrigeration to help the bread develop flavoring enzymes and bacteria before the yeast wakes up. So this may have been the first time this bread has been made in Korea. I got it from The Bread Baker’s Apprentice by Peter Reinhart of Johnson & Wales.

I started it the evening before, and everything went well until the baking. I had to throw out half the bread, and the ones that did survive looked more like bread sticks than loaves. Nonetheless, they tasted fine and had a great crispy texture.

I made a Caesar salad with homemade dressing. It wasn’t because I’m Mr. DIY. It was because I couldn’t find Caesar dressing at E-Mart.

I threw together a rustic onion tart using some of my leftover frozen croissant dough I had made last month (which had turned out to be much better pie crust dough than croissant dough).

Lastly, I made a big batch of mashed potatoes using Old Bay seasoning, some vinegar, and a whole stick of butter.

Some items that I had planned to make but didn’t make it to the table: a balsamic tomato salad, Cock of the Walk style pickled onions, E-Mart variety sausages (I remembered that Mary liked those), and cinnamon rolls (which were proofing and getting bigger all evening).

You know, after the omen of the bread, I was worried that nothing would come out right. So I didn’t take any pictures of the food. Mary did, though.

The duck I rubbed with salt, pepper, and Chinese five spice. Slowly roasted it and glazed it a bit with maple-doenjang sauce.

Oh yeah, two sauces I improvised for the party that surprisingly turned out. Here are the recipes.

The gang started showing up after five. Mary and her husband Kevin, followed by Cat and her husband David. Mary had brought a persimmon cheese tart with fresh nutmeg. David brought some cool wine and a case of high quality import beers (David, did you mean to leave that behind).

Colin showed up with some more booze and some Sun Chips and mandu. We started serving the food, and I realized that I had been so busy planning the cooking part, I hadn’t given much thought to the serving part. We luckily had enough plates, but we had to use wooden chopsticks as utensils. All the spoons and tongs were used for serving. 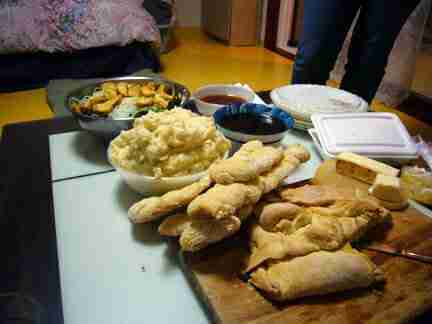 The party picked up from there. I had to have been drunk because I remembered the next day saying things that I knew made me sound stupid.

Colin went to check on a call in the computer room when he said there was a knock on the door. Gdog from The Daily Kimchi arrived with Devante and Shauna (am I spelling your name right) and a bag o’ soju.

Turned out Shauna was from Atlanta, as were Cat, David, and myself. How weird is that? Usually when you get a big group of foreigners in Korea, they’re all from Vancouver. 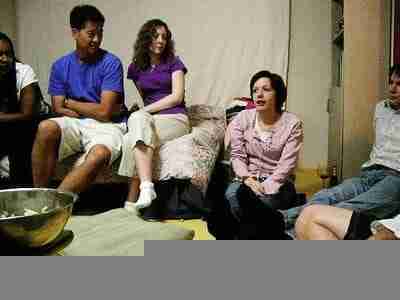 We still had some food left, thank goodness, even though it wasn’t of feasting proportions.

A bunch of food nerds in the same room. That was amazing. I don’t get to talk about food in ‘real time’ very often. Poor Colin had this lost smile on his face much of the time.

It was a nice quiet get together. Gdog and his posse couldn’t stay long. The trip from his area in Mokdong is pretty far to Anyang. Eun Jeong had to make that trek before we moved in together.

Gdog’s departure signalled the winding down of the — okay, it was a party. 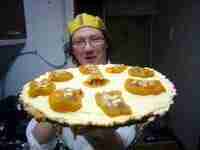 As everyone was heading for the door, we remembered that we had forgotten to have Mary’s persimmon tart. So shoes were again removed, and we had some tart.

Poor Mary was embarrassed, but the tart was amazing. Fresh nutmeg. Haven’t tasted that since I moved to Korea. I had seconds.

SeoulLife and mary eats left after that. Colin and I sat out on the balcony with our beers, talking about life.

Beyond that, I have gotten hooked on making breads this weekend. I finished making the cinnamon rolls yesterday, and they turned out better than expected. 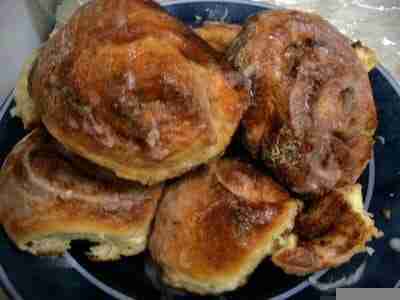 I also had all those E-Mart sausages to eat. But I had no bread. All the bread from the party was consumed. So I made my own hot dog buns, with toasted onions and sesame seeds. 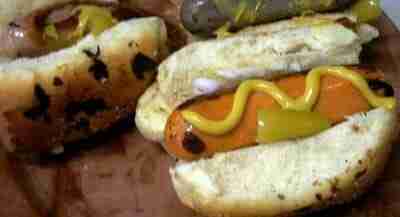 Thanks everyone for showing up! Surely doing this again.

(NOTE: Photos of the food on the table and me with the tart come from mary eats)