Lunar New Year: Let’s Have Us a Bowl of Ddeokguk–or Thirty-two 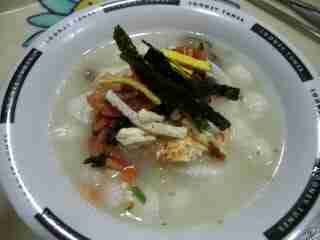 It is time for Lunar New Year again. In Korean, it’s Seollal. Thank goodness it’s not as freezing as it was last year. I have a video of last year’s celebrations on the ZenKimchi video blog web site at the folk village in downtown Seoul. 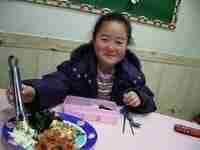 There are a few traditional foods eaten on the New Year, as there are in other cultures. My culture has a tradition of eating black-eyed peas and collard greens for good luck on New Year’s Day. Can’t find either in Korea, so when in Korea, do what the Hanguk saram do.

The big symbolic food is deokguk, a white beef stock soup with chewy rice cakes in it. We had it today at the school where I work. It’s a fairly simple soup. I can’t find a recipe on the internet, but I’ve asked around. What can make it special is the garnishes one puts on it, like shredded egg, kimchi, dried salted seaweed, and vegetables.

The rice cakes, or deok (pronounced similar to “dock”), come from a long strand one inch or more in diameter. It is cut into coin-like shapes, and this is intentional. This is to bring wealth when one eats a bowl.

I’m not sure if the rest of Asia does this, but Koreans count birthdays different than we do. There is the legal birthday, based on the solar year you were born, and there’s the lunar birthday. Generally, one could say that everyone is one year older than she really is. Everyone’s birthday is on Lunar New Year.

Since this is so, there’s a saying that a person must eat as many bowls of deokguk according to how old he has become this year. So, I guess I turn thirty-two this Seollal. I should eat thirty-two bowls of soup. 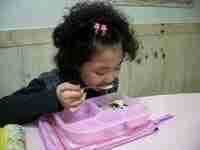 No wonder this is an extended holiday.

As with many foods eaten as tradition, it’s eaten only as tradition. I’ve talked to a few Koreans who can’t stand deokguk but eat it anyway, the same as many Canadians and Americans don’t care much for turkey but have it on Thanksgiving. I still haven’t found a Korean equivelant of fruitcake, though.

There isn’t much out there on the history of deokguk and traditional Korean New Year’s foods, not in English. I’ll post more when I find out more. One funny thing I found is a reference to an old treaty signed between Korea and England, China, and Germany, known as the Treaty of Deokguk. Korea calls England Yongguk and China Chunguk. Supposedly, Korea used to call Germany Deokguk. I told a Korean co-worker about my finding, and she was surprised. But she said that the word “deokguk” implies being long and white.

How this applies to Germans, I’m afraid to guess.