I bought it at Chef Meili Delicatessen a few months ago. Someone had special ordered it and never picked it up. It wasn’t cheap, but I bought it on impulse (I’m an impulsive food buyer–you should see the Japanese meat grinder I’ve barely taken out of the box).

Even though I’m a big ass food freak, I have never had foie gras. In my life Before Korea (B.K.), I was in college or struggling to keep my neck above water during the dot-com bust right after college. So I didn’t have the disposable income to buy or try decadent ingredients. I knew of foie gras. I knew where it came from. I knew the controversy–both sides of the debate. I watched “Foie Gras Battle” on Iron Chef (the Japanese one).

It was one of those forbidden pleasures that I had yet to try, like truffles. It’s funny. I’ve eaten all these other things the foodies only talk about at their foodie cocktail parties. Yet I have never had one of the basic required foods for induction into this club.

Cathy (SeoulLife) and I had been talking about getting a party together for a while. It was originally going to be around Thanksgiving. It then moved to around Christmas. Cathy ended up taking the initiative and set the party for December 8th at her house to work around her husband David’s trip to China.

I didn’t go too overboard, as a I could have, in prepping stuff for the party. I wanted to share foods I love around Christmas and some new ones I have discovered how to make. There initially was a long list, but I took off the Thomas Keller Pig Trotters and the Pumpkin Pudding Pie. In the end, I made some Egg Nog, Mulled Cider with Spiced Butter (we made the cider at the party, and I forgot to add the butter for the first few cups), Oyster Bisque (basically the Oyster Stew with a lot of white wine and mauled with my stick blender), the Asian Spiced Fried Almonds and a Foie Gras Torchon.

I wanted to do something classic and something I could do ahead of time. I also emailed my brother Chef Ben for advice, but we never timed the emails right.

“I’m thinking of making a torchon.”

“Torchons are a pain in the ass. Just cut it an sear it.”

“Oh man, I already started making it. Any advice on deveining?”

“I don’t bother much with deveining. It’s too much trouble.”

“Too late. Already did it.”

I checked out a few web sites, but I mostly followed a classic technique and the Thomas Keller way via The Amateur Gourmet and Carol Cooks Keller. It took a couple of days to do.

I first marinated it overnight in a zipper bag with brandy and Korean raspberry wine (ExPat Jane’s favorite). 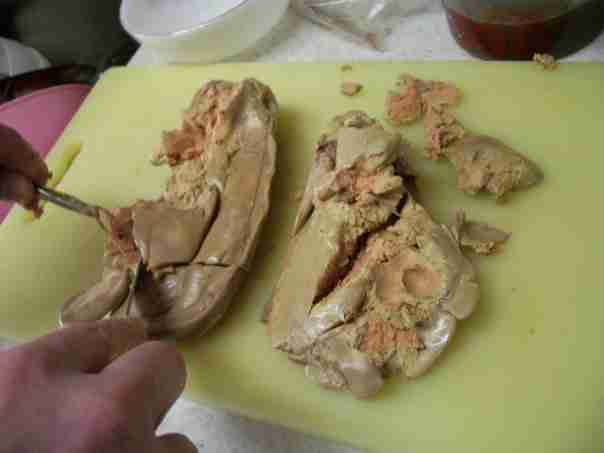 The next morning, I took it out of the fridge and let it get to room temperature and then worked on deveining it with a small knife and tweezers. Ugly business. Really, only the large major veins seemed worth the effort. There was no way for me to keep the thing whole. It would take practice on doing many of them to get the anatomy right enough to cleanly clean it. In the end, I cut it up and mashed each piece in my fingers, looking for veins.

Eun Jeong watched me the whole time and said, “Joe, please don’t make me eat that.” 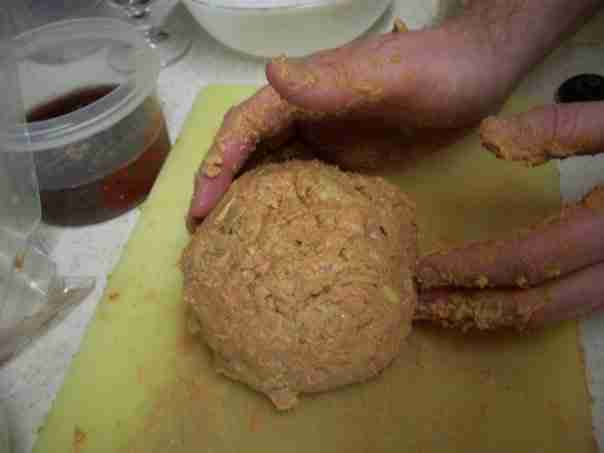 When it’s at room temperature, it’s a messy beast. It sticks to everything. It’s like the culinary version of that scene from Ghost minus Patrick Swayze sneaking up behind me and kneading the foie. But that would be creepy, and I don’t really swing that way.

I seasoned the foie ball with a good bit of salt and freshly ground pepper. Mixed it all in there. 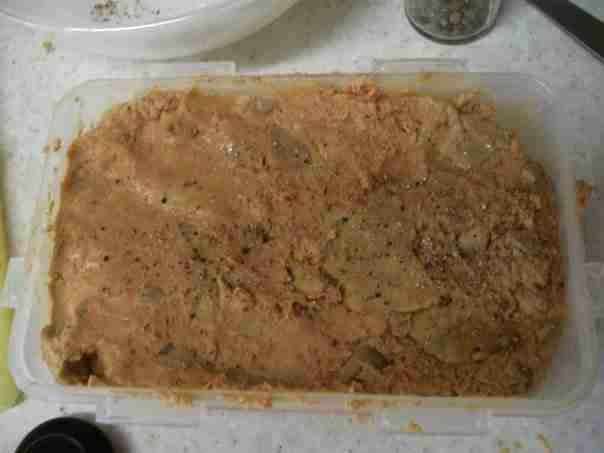 I packed it all into a container with a few extra grinds of pepper. 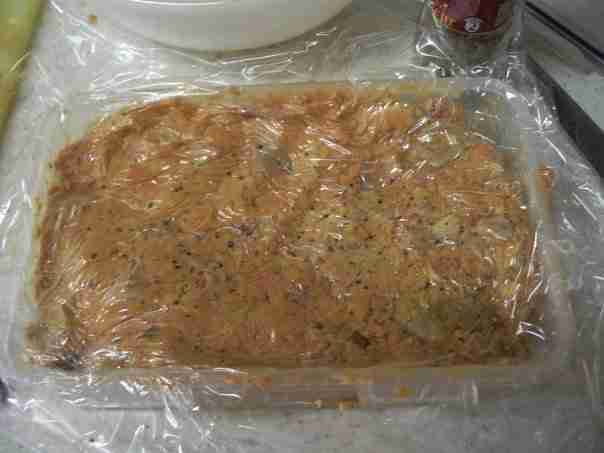 Covered it with plastic wrap to keep out as much air as possible before covering it and putting it back in the fridge. 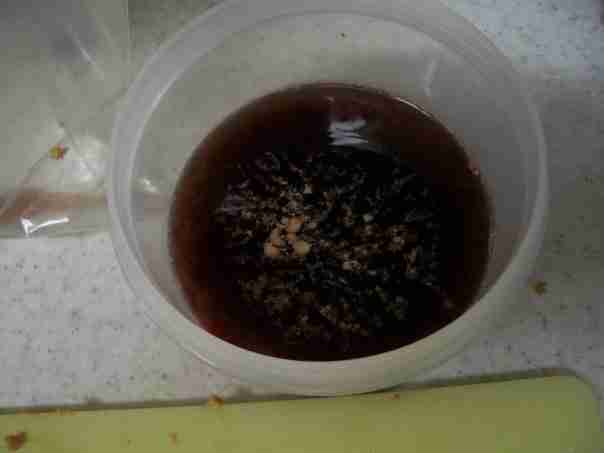 I also remembered to reserve the marinade in another container. 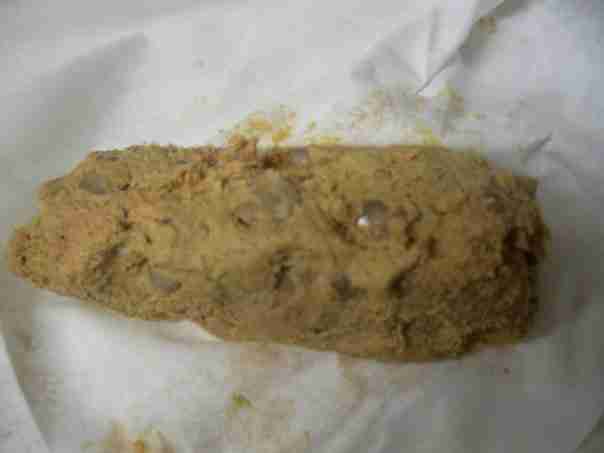 That evening, after taking it out of the fridge and letting it get to room temp again, I formed it into a log on some filter paper. All the recipes said cheesecloth or a towel (the torchon). Yet I couldn’t find any cheesecloth at E-Mart this time. 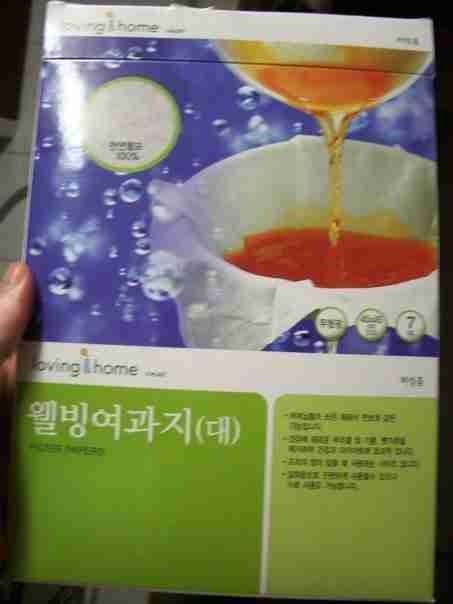 They did sell this multi-purpose stuff for absorbing grease and straining. It looked pretty tough, too. 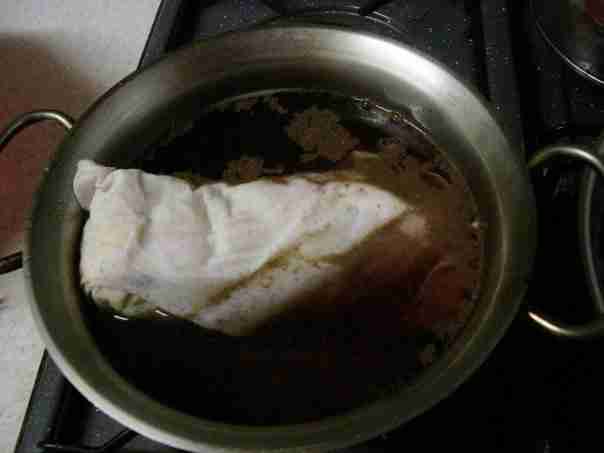 I took out the brandy and raspberry wine marinade and added it to a pot with water. I didn’t have any chicken stock on hand. Ruhlman says that if you don’t have fresh stock, water is the next best thing, rather than anything canned.

I heated the water to a gentle simmer–not boiling. The log was a bit too big for the pot. I placed it in there for around 90 seconds on each side. 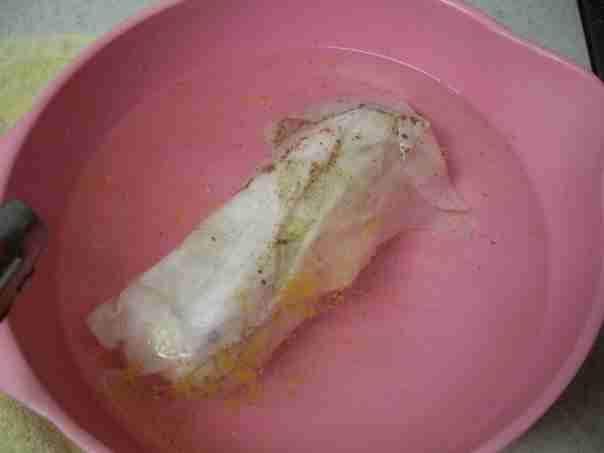 I then shocked it in some freezing cold tap water. Note the yellow duck fat coming off of it.

I placed the log on the end of a clean dish towel and rolled it up.

Tied it up securely.

Now, the next step is to hang it in the refrigerator. I have no space in my fridge, and there’s no way I can make space. But we’re in the midst of a classic Korean winter. 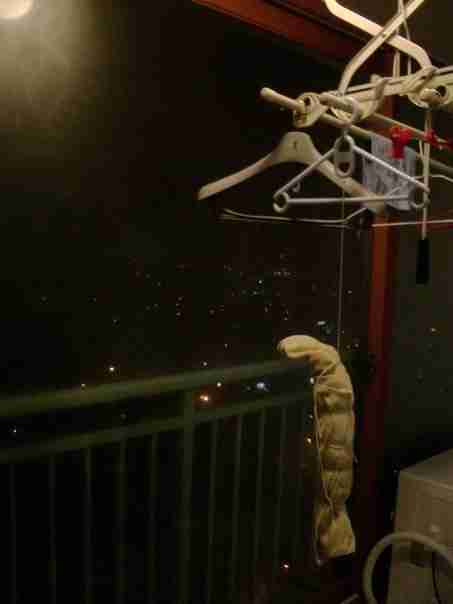 So I hung it on a clothes hanger on the balcony. It had a nice view. 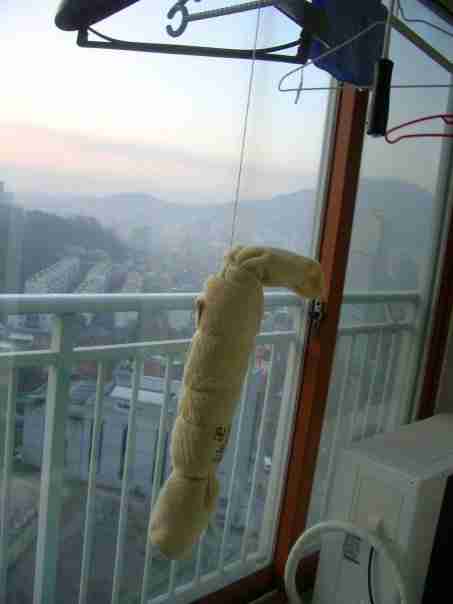 I woke up early the next morning and took it down. Put it in the refrigerator. It only needed to wait to be transported to the party for the great unveiling… 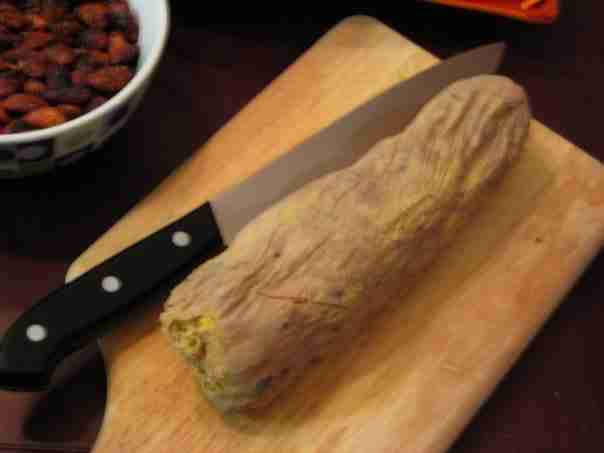 Photo by David Gray of Epicourageous in Seoul 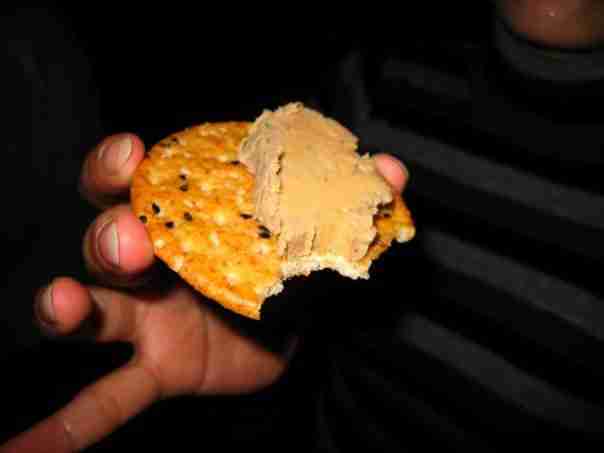 Can you believe that’s Eun Jeong eating that? And enjoying it??

It was damn good! It sounds cliche, but it had the consistency of butter and tasted–expensive. Guilty. Decadent.

There was good evidence of the brandy and raspberry wine. It was a bit salty. I really seasoned it. It didn’t really taste like liver. It was a sinful butter.

There must be some kind of addictive chemical in there because it was so rich I quickly had my fill, but I was craving more every thirty minutes. It coats everything it touches, from your lips down your throat.

I left half the leftovers with Cathy to munch on while David was away in China. It was even better the next morning.