A 12 day countdown to the Korean New Year with Tteokbokki

I’ll be posting 12 tteokbokki recipes over the next 12 days leading up to the Korean Lunar New Year (Eum-nyeok Seollal, 음 력 설날) in response to the South Korean government’s campaign to make the rice cake dish the linchpin in their international marketing strategy for Korean cuisine.

The government wants Korean cuisine and culture to be more greatly appreciated all over the world and chose tteokbokki as key to the public relations push. [See “Tteokbokki, topokki: Whatever you call it, it’s good!“]

I wonder whether the governmental champions of Korean cuisine think that by making tteokbokki an international cuisine it will boost other Korean delicacies, such as Chosun royal cuisine, to international recognition. 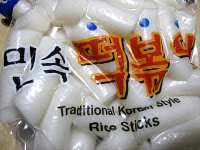 Many in the Korean ex-pat blogosphere wonder why the Korean government would be pushing tteokbokki (or any other rice product) when current domestic production doesn’t meet current demand.

Tteok commonly found in most Korean grocery stores on this side of the Pacific (San Francisco Bay Area) is made in the U.S. with American rice. In other words, increasing domestic rice production is only part of the issue. Imagine tteokbokki as a tool of public relations and international diplomacy.

There’s a small snag though. Tteokbokki traditionally is a very, very spicy dish. Even some Koreans won’t eat it because it’s so spicy. That’s why the Korean government created an official government agency to create Korean-fusion tteokbokki recipes.

If the Korean government wants to send me a donation for inspiration kindled during my forthcoming 12 Days of Tteok, I wouldn’t mind. However, I’m doing this because of my love of Korean cuisine and the challenge of making 12 dishes in a row with the same ingredient. 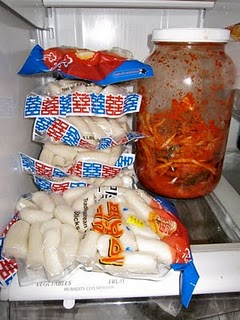 When I pitched this project to Joe McPherson, my “boss” he asked, “You think you could pull them off?”

Peer into my refrigerator (right) and see that I’ve got the tteok stocked. I’ll blog; you decide.

Twelve different versions of tteokbokki (using sauces from different parts of Asia, Europe and North America) in 12 days can wreak havoc on anyone’s diet, so dine in moderation. Feasting with your eyes is calorie free.