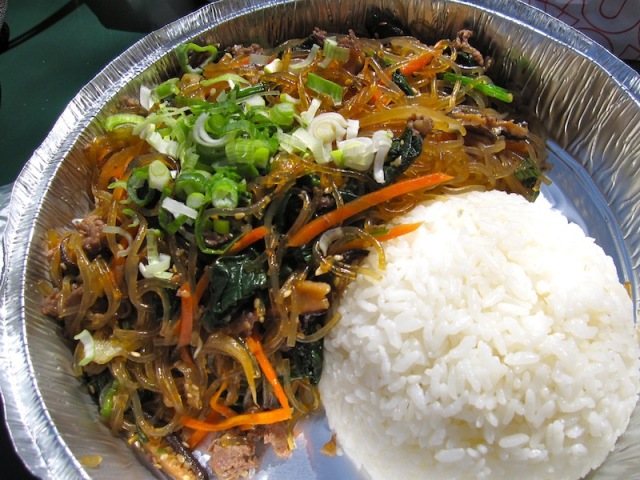 This is what I traveled for an hour and a half one way to taste. Yum!

Stone Korean Kitchen is the newest Korean restaurant in San Francisco, officially opening in November 2009. To be fair, I waited four months for any mistakes or deficiencies common to all new restaurant ventures to be resolved.

The restaurant is located in Embarcadero Center office and retail development in the heart of San Francisco’s Financial District. That helps why explains the hours of operation — 11 a.m. to 9 p.m. Monday–Friday and closed on Saturday and Sunday — are not very tourist-friendly. Yet the restaurant is an easy walk across the street from the Ferry Building, through which boatloads of commuters and tourists pass daily from the north San Francisco Bay counties.

I prefer to take a ferry to San Francisco from the Marin County city of Larkspur, because parking is difficult to find and can be expensive. San Francisco and other California cities are adopting a transportation-management policy called “congestion pricing,” which increases parking fees during high-demand times to discourage traffic congestion from drivers circling the streets looking for open spaces and to encourage walking, biking or riding mass transit.

As is increasingly common, the lunch, dinner and take-out menus are available on the restaurant’s website. I’m grateful for that, because I like to take my time studying a menu but don’t like to waste the waitstaff’s time.

I arrived at the restaurant at 11:50 a.m. just before lunch rush and ordered japchae and kimbap to get an idea of how the kitchen treats Korean classics. The menu also has a few fusion options, such as bulgogi sandwiches. 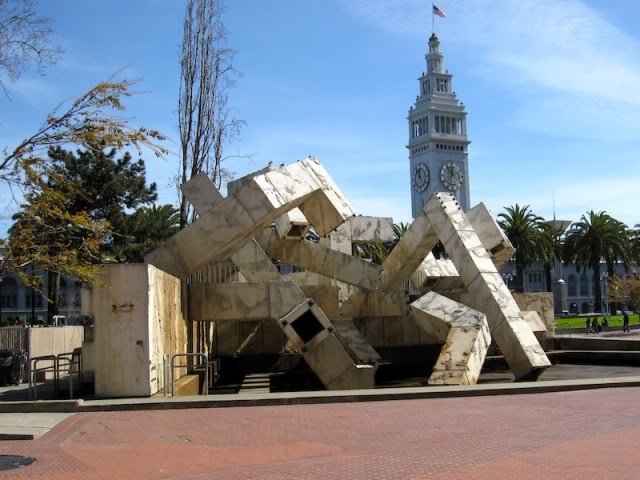 A view of Justin Herman Plaza from the front of the Stone Korean Restaurant. The landmark Ferry Building clocktower and palm trees along the boulevard are visible.

The restaurant is small, so the indoor seating is somewhat limited. As catching a sunny day in San Francisco during winter is rare, particularly this year amid week upon week of rain, I opted for the alfresco seating on Justin Herman Plaza. From that warm, breezy location I could see the row of palm trees that line the Embarcadero boulevard along the San Francisco waterfront.

My order arrived within five minutes. The japchae had the common mixture of marinated beef, mushrooms, spinach and carrots with cellophane noodles. It was a tasty dish, but the sauce seemed a little light on sesame oil and heavier on soy sauce, garlic and black pepper. For those who don’t like the heavy hand of sesame seed oil in a number of Korean restaurants, Stone Korean Kitchen’s japchae might be what you’re after. The accompanying white rice was perfectly cooked, not crunchy or mushy.

My husband shared leftovers with his co-workers that afternoon, and this japchae didn’t fail as a palate-pleaser for Korean food initiates. 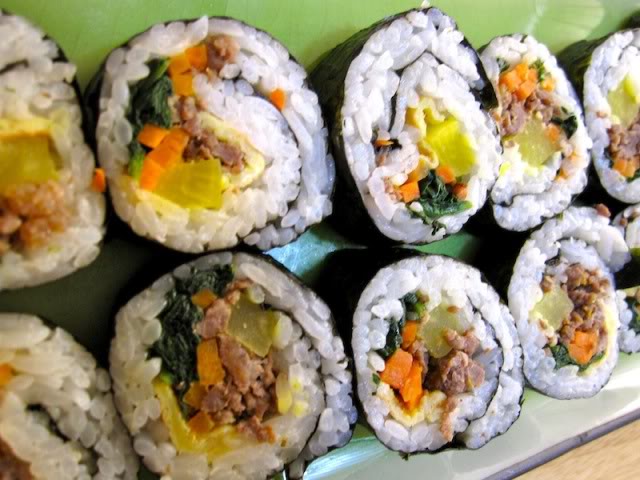 There were several packages of kimbap — one of my favorites — stacked at the front desk just inside the front door. How could I resist? The marinated beef, pickled daikon radish, egg and garlic-marinated spinach rolls were some of the best kimbap I’ve had in a long time.

It was certainly worth taking a day off from work for the four-hour car and ferry round trip to visit Stone Korean Kitchen. Now, if only the restaurant were open on Sundays.