Tov Tofu in Santa Rosa opened in late 2010 and is the latest Korean restaurant to open in Sonoma County, a winegrowing region about an hour north of San Francisco. Bear Korean in Cotati opened several years ago, followed by the now shuttered Nha Bee in Santa Rosa and Honey Cuisine in Rohnert Park in 2008.

My husband and I visited Tov Tofu for the first time on Dec. 24 for a late lunch with a couple of our friends and their two children ages 2 and 4. It’s good to invite, cajole, plead or drag your family and friends with you to a new restaurant, so you more can sample more dishes and get a variety of opinions, from the expert Koreaphile to the first-time 한식 hansik (Korean food) diner. 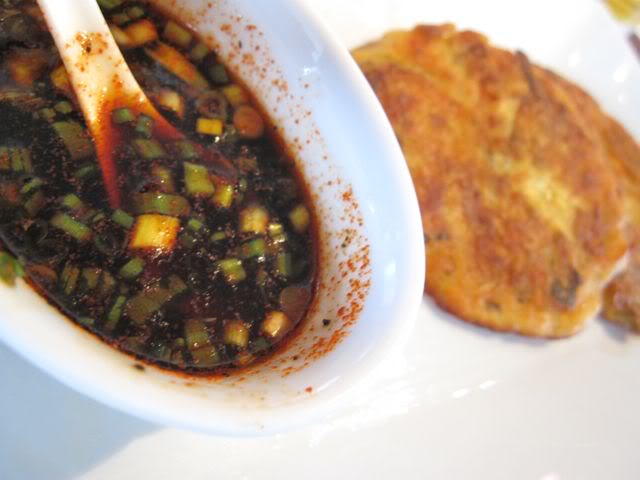 The dipping sauce was beautiful, but it was the pajeon itself that kept the children happy. (Jeff Quackenbush photo) 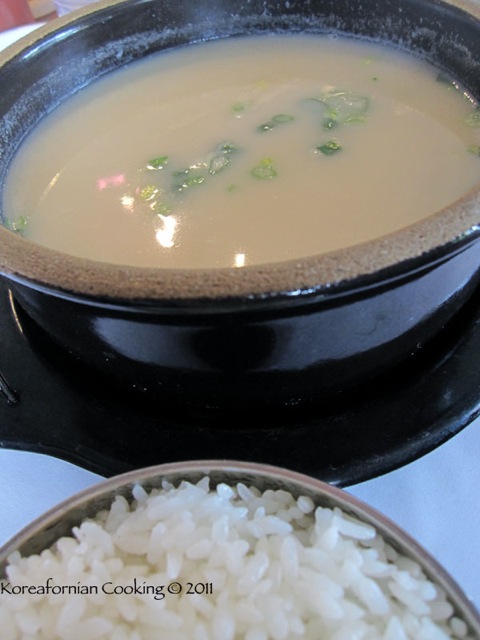 The waitress brought out salt and pepper shakers to spice up the oxtail soup. (Jeff Quackenbush photo)

The oxtail soup ($12.50) was a mellow and non-spicy option, which ties into its reputation as a health tonic. Some who are not familiar with Korean cuisine might be put off by the milky-white bone broth, but it is full of minerals, including calcium, iron and potassium. 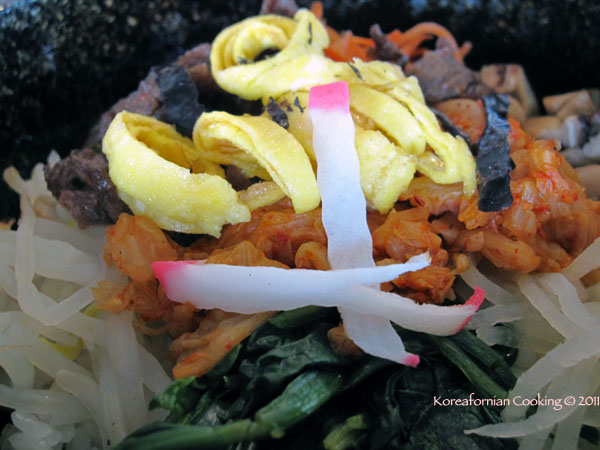 As part of his repeated challenge to K-pop and now Hollywood star Rain, Stephen Colbert said, "I'm all over it like egg on bibimbap." This bibimbap was garnished with strips of scrambled egg. (Jeff Quackenbush photo)

Tov Tofu’s bibimbap ($12.95) was the first such dish I’ve seen that didn’t have a large fried egg placed on top, but I enjoyed the sliced egg omelet homage to the fried egg as well as the pile of kimchi, beef, mushrooms, shredded daikon radish, seaweed (김 kim) and spinach.

A surprising discovery for newcomers to Korean cuisine is 옥수수차 oksusucha (roasted-corn tea), because corn often is not thought of as a tea ingredient. I’ve found that it has to be requested at a number of Korean restaurants I’ve visited in the U.S., rather than being automatically served as green tea is at Chinese restaurants. The hint of corn in a hot beverage is a welcome way to warm the insides while waiting for the food to arrive.

We went back to Tov Tofu on my birthday. This time, my stomach drew me toward the Korean cuisine stalwart 불고기 bulgogi. Tov Tofu’s version was served in typical fashion, layered on a bed of onions and sizzling on a hot iron plate. 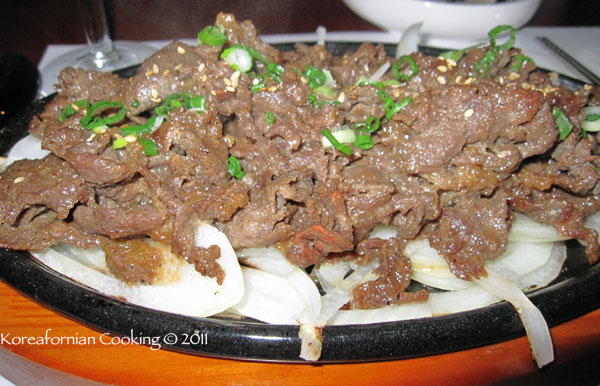 The savory side of bulgogi was more prominent in this interpretation than the characteristic sweetness, which is usually imparted by a Korean pear-forward marinade. Yet the grilled onions added a little sweetness and were just as tasty as the bulgogi itself.

My husband ordered the beef version of 김치 순두부 찌개 kimchi soondubu jjigae (kimchi stew with silken tofu) ($9.95). Those who may be averse to kimchi may want to give kimchi jjigae a try, because cooking gives kimchi tames the tang. Also, the tofu soothes the fire of this spicy dish. The broth had a slight fishy flavor, which likely came from either a fish broth or the fish paste used in many versions of kimchi.