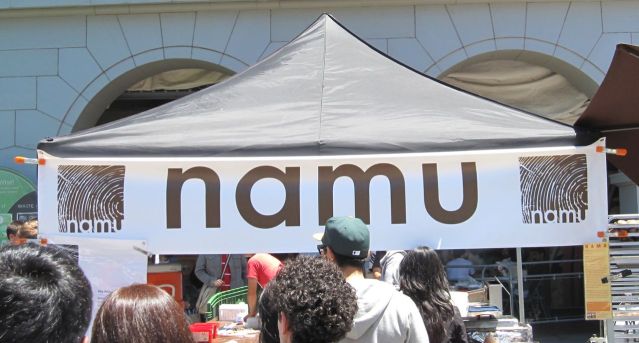 Namu is a Korean and Japanese fusion restaurant owned and operated by three Korean American brothers — chef Dennis Lee and his brothers, Daniel and David — who have established a presence at the Thursday and Saturday farmer’s markets at the San Francisco Ferry Building. They serve what they call “cutting-edge new California” cuisine.

The market menu (PDF) features kimchi fried rice, okonomiyaki and their own spin on Korean tacos (ssam in Korean), using toasted seaweed as the wrap. 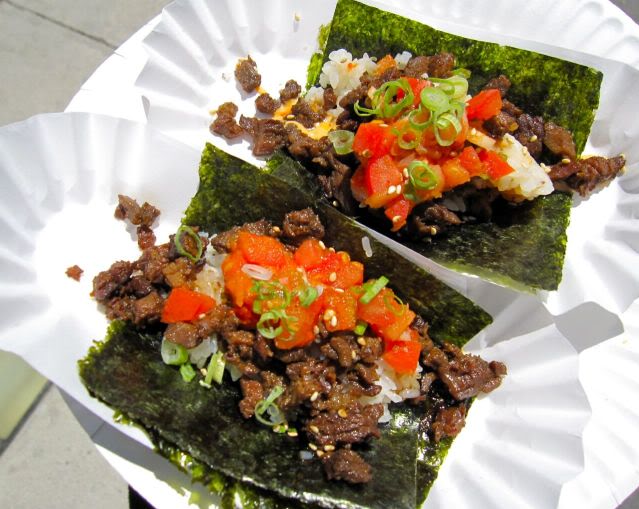 While there a recent Thursday, I tasted the Korean tacos, which cost $5 for two. Each have two sheets of Korean or Japanese seaweed with some sushi rice topped with teriyaki-marinated beef and kimchi salsa on top. Each taco is two or three bites of Korean fusion genius and more healthful than those wrapped in soft or fried tortillas. 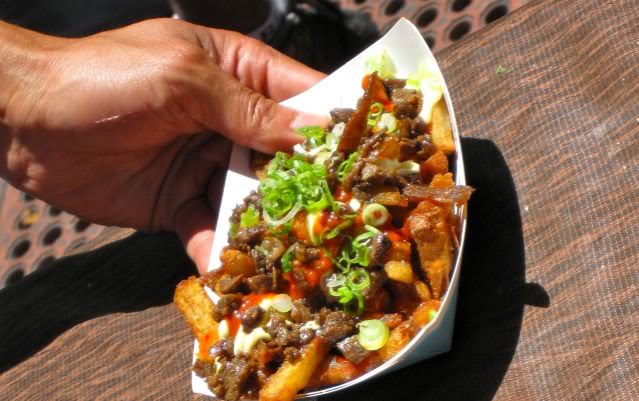 Korean french fries topped with chopped kalbi and gochujang will fill you up.

The gamja (Korean for potato) fries are made from “hand-cut potatoes” and topped with kimchi relish, gochujang (Korean spicy red pepper paste), sweetened mayonnaise (Namu uses the popular Asian brand Kewpie), teriyaki, chopped short ribs and green onions. Orders for the fries were flying off the grill, especially in tandem with the Korean tacos.

The okonomiyaki, or Japanese savory grilled pancake, was in demand as well. Namu makes its “crispy and gooey flour pancake” with kimchi and market vegetables, topped with bonito flakes, okonomiyaki sauce and sweet mayo. Most ordered it with a sunnyside-up fried egg. I saw one brave soul pass me with a plate of okonomiyaki with a raw egg on it though.

The dish’s name comes from okonomi, which can be translated “as you like it,” and yaki, for “grilled” or “cooked.” A thinner version is similar to the Korean flatcake dish panjeon. 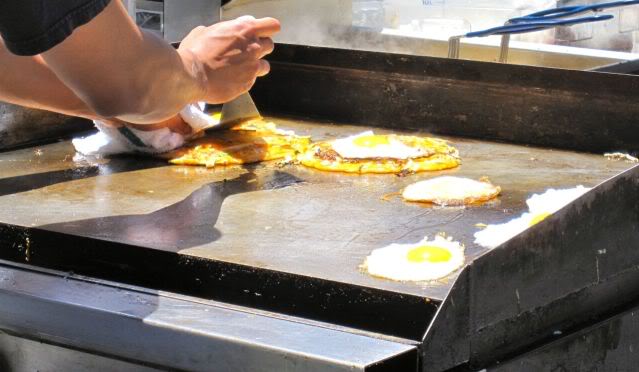 The okonomiyaki were made fresh and to order.

The brick-and-mortar restaurant is located at 439 Balboa St. in the city, near Golden Gate Park. The menu there also includes Korean fried chicken, ramen, bibimbap and additional Japanese-influenced items. Also served there are more than 30 selections of wine, sake and soju.