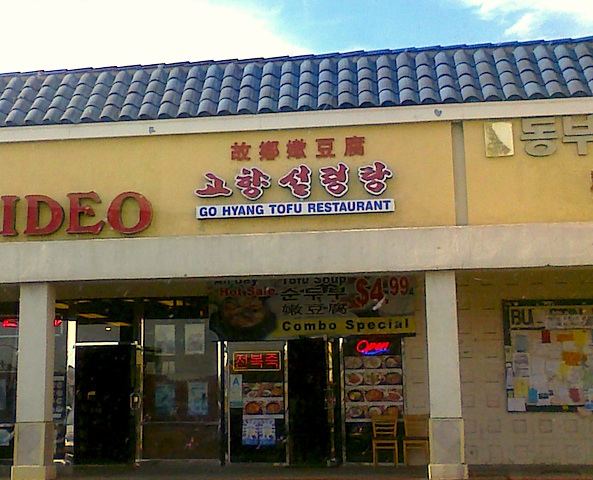 There is a pretty nice Korean community in the Rowland Heights/Diamond Bar area on the border of Los Angeles and Orange counties. Along Colima Road, between Fullerton Road and Fairway Drive, you can find a number of Korean and Chinese restaurants.

I was having one of those Mondays. A day filled with meetings and odd waiting times led me to skip lunch. After the last meeting, I got in the car and just started to drive. Traffic in Los Angeles was no joke that day — typical Monday evening going-home traffic. I wanted to wait until I got home to eat, but I just couldn’t hold off the hunger any longer.

On this day, due to some silly drivers on the road and bad construction markings, I ended up at Galleria Market Plaza at the corner of Fullerton and Colima roads. In the shopping center, my choices narrowed down to either a tonkatsu restaurant or Go Hyang Tofu Restaurant. The Korean script above the English sign read, Gohyang Sulungtang, or “Hometown Sulung Soup.”

It is a small place, with about 25 seats. The straightforward menu had no appetizers but various soondubu soups and some other Korean favorites. It seems this restaurant specializes in two main tang dishes — soondubu, or soft tofu, and sulung.

As for banchan, or side dishes, I was served baechu kimchi, the common spicy Nappa cabbage kind of pickled vegetables; gagtooki, or cubed daikon radish kimchi; and soy sauce–braised potatoes. 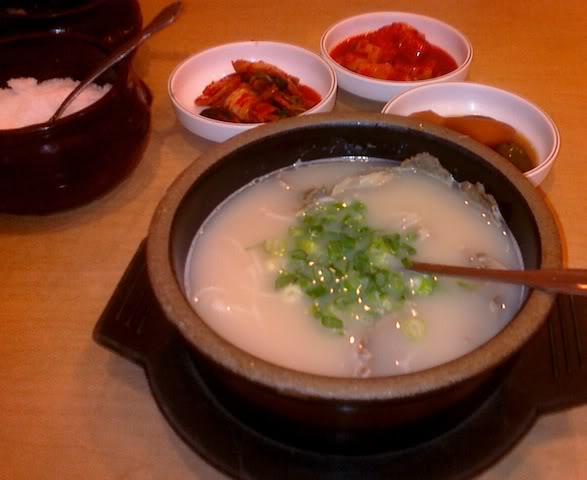 If sulungtang is in the name of the joint, it had to be good. My bowl of it came a couple of minutes after the banchan. The broth looked great. I added some sea salt and chopped green onions to my taste. Then, I dumped the accompanying bowlful of rice into the soup.

Personally, I’m a gomtang kind of a guy. If you like gomtang, you may not like sulungtang. The two soups may look very similar, but they are slightly different. Gomtang uses more types of bones in the stock and it’s cooked much, much longer, providing a much deeper taste. Sulungtang is lighter in taste, because it’s cooked relatively fast. Sulung is roughly translated “haste” or “hollow.”

Go Hyang’s sulungtang had nice texture or viscosity. The meat was excellently prepared, sliced thin and without the funny aftertaste it often has in basic Korean restaurants.

One reservation I had with the soup was the flavor was rather bland. I know, it was sulungtang and not gomtang, but there was absolutely no umami, or savory, taste to the broth. Maybe it was an off-day for the kitchen.

So, in the three categories that make a great Korean tang, Go Hyang gets top-notch scores on two: color/viscosity and meat preparation. This makes me want to go for a second time to confirm the impression.

Taeyang Yoon is an entrepreneur who has owned and operated a small Asian fusion restaurant with a sushi/sake bar. He loves to marry flavors and textures from various parts of the world and tries to make them his own. Although, he is not professionally trained in a culinary school, nor journalism, that doesn’t stop him from opining on the world of food. He founded KarFarm.com and bokko10.com, and you can find him roaming around the San Francisco Bay Area or Southern California.