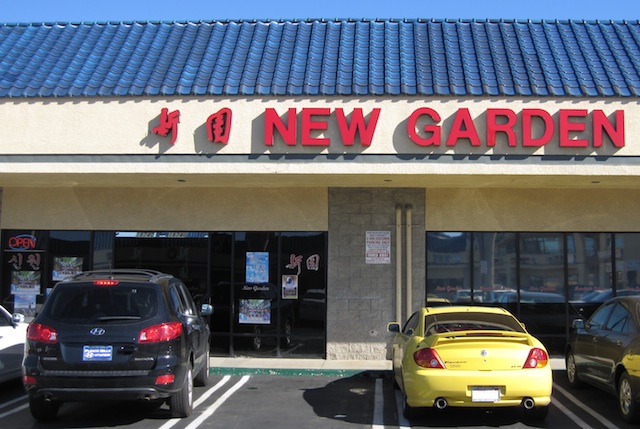 Continuing our journey down the ‘Korean’ section of Colima Road in Rowland Heights, we stop at one of my favorite places. I have been coming here on a fairly regular basis for a few months now. This restaurant is renowned for its ‘joonghwa yori’ (Chinese-Korean cooking), the people in the know go crazy over their jajangmyun (jajangmyeon) and tangsuyook – and I am one of them.

I found this place by asking some grocery store clerks nearby and almost unanimously they recommended this restaurant – New Garden Restaurant. It’s on Colima Road near the Paso Real Avenue intersection.

The restaurant itself is fairly large; it has a main dining area with about 100 seats and also a couple of private banquet rooms. The decor is clean and somewhat dominated by the two large big screen Samsung TV’s on either side of the dining area. Also, you can always find some customers slurping on some jajangmyun noodles at anytime of the day.

A huge plus for the restaurant is that the staff is excellent, probably some of the best service I receive in a ‘Chinese’ restaurant – they are very attentive and courteous. As soon as you sit down, they bring you some hot tea. After you order the food, they immediately serve you the dice onions with chunjang sauce (AKA jajang sauce) and joonghwa style cabbage kimchi. The main dishes come out not too long after the order. Just the scent of the food being served make the salivary glands instantly work  in overtime, not unlike the Pavlov’s dogs. 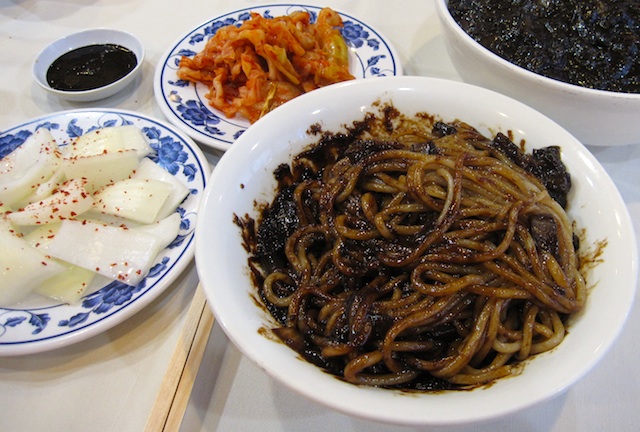 Jjajamyun with kimchi and radish banchan served with a side of extra black bean sauce. (Photo by Taeyang Yoon)

The beauty of jajangmyun is in its simplicity. It’s just jajang sauce served over thick noodles. The sauce is made with onions, squash, and beef stir fried in black bean paste (chunjang) sauce which is thickened with some corn starch. Some gringos might call this the Chinese spaghetti, and they are not too far off in saying so. But we all know where the Italians got their noodles from…

The New Garden’s version of jajangmyun can be described as perfect sauce with machine extruded noodles. A true dish of jajangmyun is served with ‘sutamyun’, which is made by hand-pulling and beaten over the worktable. This type of noodles gives it a superior mouth-feel, but artisans who can create such noodles are getting rare today. At any rate, the New Garden’s offering gets a top-notch score in flavor, texture, and in preparation. The sauce is not sugary, not greasy, and not salty. It has just the right amount of savoriness, or umami. The noodles are cooked just right, although it is a shame that this great sauce does not get the deserved sutahmyun!

Their tangsuyook also deserves a very high praise. The meat is perfectly deep-fried with no funny, oily aftertaste. The meat actually stays crispy and the longer it sits in the sauce, the coating on the meat become chewy. At most restaurants, the tangsuyook goes soggy after a few minutes… not here. Also, to note, the sauce is not overly sweet as it often is at other places.

The ending verdict is that if you are a fan of jajangmyun, one of Korea’s national foods, or want to try it for the first time, New Garden Restaurant in Rowland Heights is one of the best.