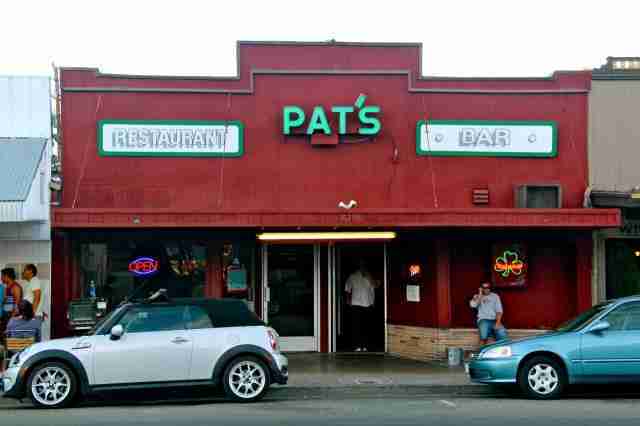 You’ll find the diner on Main Street of the riverside community of Guerneville. Yet you won’t spot a large neon “Blomster’s Korean” sign. That’s because this Korean hot spot is a popup restaurant in Pat’s Diner, a fixture of downtown Guerneville since 1945. And it shows in the decor of the 70-seat diner, which shares space with the bar next door.

The name change is only a a month old, but the birth of Blomster’s came in December 2012. According to a waiter who served us at the counter, the owner plans to purchase the building. That’s a sign of success and future job security.

The owner, David Blomster, and chef Eugene Birdsall are alumni of Boon Eat + Drink, which is located next door to the current restaurant. Chef Birdsall was blessed with a Korean mama who taught him how to make traditional Korean cuisine.

The menu was a bit confusing for Hubby and I to navigate. We couldn’t tell for a while whether many of the items were separate or part of a combo.

I normally don’t buy appetizers at a restaurant, because the main course usually is more than enough. Yet this appetizer menu was intriguing enough to warrant ordering more than one. 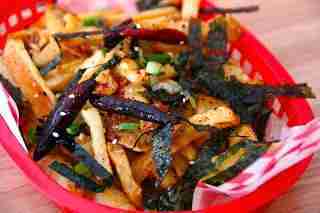 Accompanying the basket of fries was a small dish of kimchi-topped aoli for dipping. As someone who loves to dip French fries in mayo, this aoli was a fun kick in the pants.

The minced garlic on the fries had been massaged with 고추가루 gochugaru (spicy red pepper powder), doubling the lip-tingling fire. I liked the savory saltiness brought by the the seaweed rather than just salt.

Shortly after we put in the order for the Seoul Fries, the entire restaurant smelled like garlic. I wouldn’t be surprised if our clothes smelled of garlic when we walked out. Our breath certainly did and the diet coke and water I drank with my meal did not put a dent in that breath. 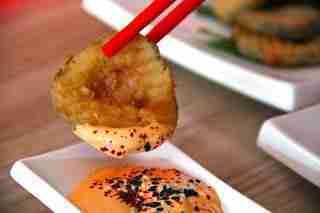 Korean pickling is something I’ve come to love in the past decade and a half, but traditional Euro-American cucumber pickles are my comfort food of yesteryear. So I really wanted to try “Fried Sonoma Brinery Pickles with Sausalito Springs watercress” ($5). The batter was delicate and crisp, and the pickle slices were not soggy or greasy.

With more kimchi aoli for dipping, this was not a low-calorie start to our meal. 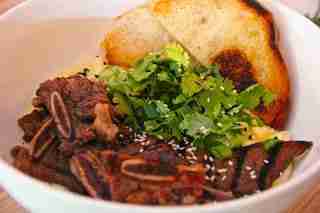 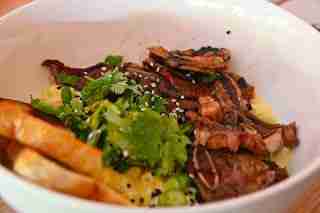 For the main course, I ordered “LA Kalbi Mac & cheese” ($10). Instead of the typical yellow cheddar macaroni sauce — or otherworldly neon orange-yellow of box-based preparations — this dish topped the hollow pasta elbows with with white cheese sauce.

The kalbi was grilled — with the smokey char marks to prove it — yet the meat was still tender and succulent, while still being cooked completely. A hint of fruitiness, particularly cherry, in the marinade makes me think it contained Dr. Pepper or a similar soft drink. That certainly would match the diner theme of the decor and the menu. 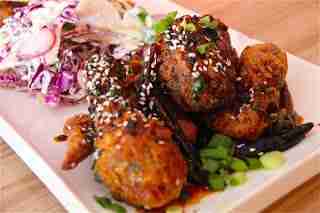 Accompanying the chicken was a soy, ginger and vanilla coleslaw, garnished with sliced radish.