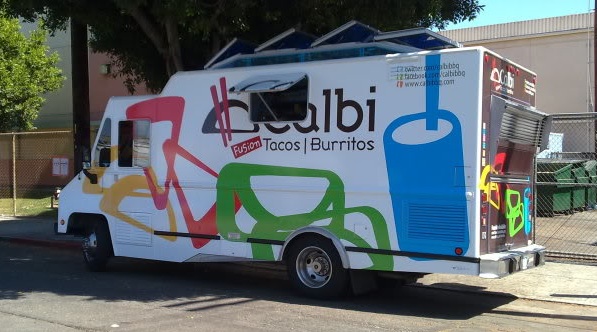 One of my friend’s brothers runs MoGo BBQ trucks serving Korean tacos in San Jose, Calif., so I had some baseline to work with. Unfortunately, I haven’t tried Kogi’s offerings yet.

I encountered Calbi while strolling around Los Angeles’ Little Tokyo, a.k.a. Japantown. A familiar scent wafted through the air — Korean barbecue on the grill — but there wasn’t a Korean restaurant to be seen. Then my friends and I spotted a Calbi truck, parked as it usually is across the street from the Honda Plaza, located at East Second Street and South Central Avenue. Although we were full from dinner at Honey Pig in Koreatown, we gave it a go.

We ordered the spicy pork taco ($1.99). The meat certainly had the Korean flavor to it, though a little too sweet, which is common. The tenderness and texture were good, and the spiciness was well-controlled, what could be classified as medium hot. There is a gamut of hot sauces and other condiments available, if you want it to be hotter. A hint of charred flavor came through the mild dressing and crisp chopped greens.

Overall, the sweet, savory flavor with a slight kick worked well with the cooling effect of the dressing, tortilla, cheese and toasted sesame seeds.

I would recommend it to those who are new to Korean barbecue and want something different from a traditional Mexican taco. Yet Koreans and those well-versed in Korean food likely would find fault.

It’s one of those things that are more of a novelty than a new food revolution. You try it once and be appreciative of people who are attempting something like this, getting the word out about the Korean food and culture.

Taeyang Yoon is an entrepreneur who has owned and operated a small Asian fusion restaurant with a sushi/sake bar. He loves to marry flavors and textures from various parts of the world and tries to make them his own. Although, he is not professionally trained in a culinary school, nor journalism, that doesn’t stop him from opining in the world of food. He has founded KarFarm.com and bokko10.com, and you can find him roaming around the SF Bay Area or SoCal.