On trips to see family in Alaska’s largest city, Anchorage, I make it a point to visit VIP Restaurant at least once. It’s located in the Valhalla Center, a retail and office building amid the Korean business cluster along West Northern Lights Boulevard.

There are a few other Korean restaurants in the city, but I have a personal connection to this one. A relative built the center the 1970s and leased the space to the restaurant in the early 1990s. 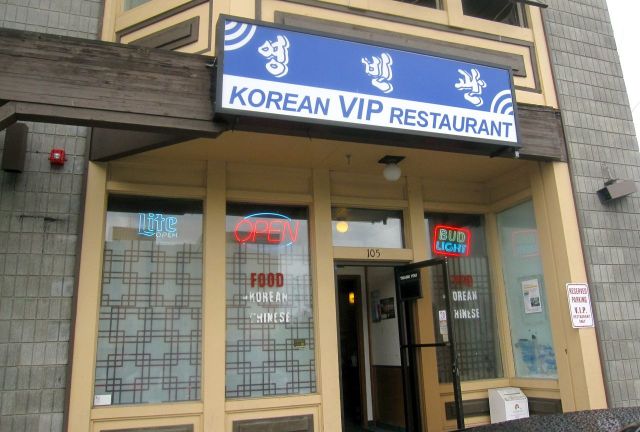 VIP Restaurant is on the ground floor of the Valhalla Center on the far right side. (Tammy Quackenbush photo)

For those reluctant to try Korean food, also offer a modest selection of Chinese restaurant favorites, such as curry chicken, fried rice and Mongolian beef.

My husband and I brought my mother-in-law and stepfather-in-law for a weekday lunch. The restaurant was not crowded, and we received attentive service. 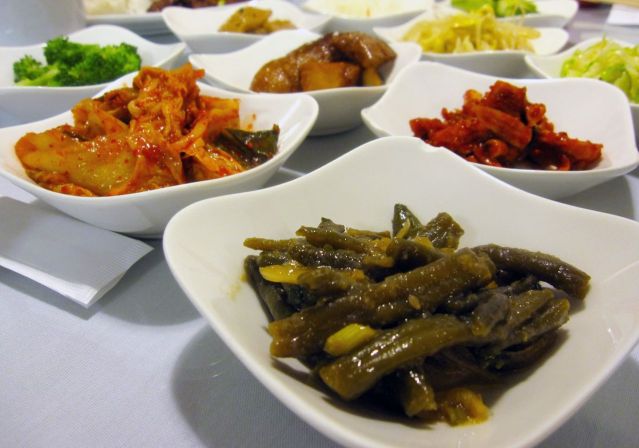 Land of the Morning Calm in the Land of the Midnight Sun: A 13-banchan display was traditionally reserved for royalty, but this is not a snooty, royal cuisine restaurant. (Tammy Quackenbush photo)

The waitress brought out 13 반찬 banchan (appetizer plates), the most I’ve seen at any Korean restaurant I’ve visited so far in the States.

One of the banchan highlights was the seaweed salad. My husband normally eschews chewing seaweed in its various forms. This was first seaweed salad he said he enjoyed, partly because the type of plant used was the more delicate wakame seaweed (which is called 미역, miyeok in Korean) and partly because the savory-sweet marinade pleasantly masked the taste.

The main course came with a small bowl of 동민 dong min radish kimchi broth flavored with green onion and beef. That was another first for me on this side of the Pacific.

Ordering galbi ($12.99 lunch) and Mongolian beef ($11.99 lunch) allowed a side-by-side comparison of Korean and Chinese foods. The galbi was grilled wang-style (“king” cut with thin meat along two- to five-inch-long ribs) rather than L.A.-style (a thin flanken cut) more common to Korean-American restaurants.

The galbi had the typical Korean sweet touch, likely from fruit juice or corn syrup in the marinade. The Mongolian beef was stir-fried with ample green onion and certainly was more savory than the galbi. My Korean cuisine–averse builder-relative scarfed up the galbi and barely touched the Chi-Am dish.

The dolsot bibimbap dishes — served at this established in thick metal bowls rather than earthenware — hit the key cue: a blazing-hot bowl to crisp the rice in sesame oil and keep the food warm throughout the meal. The latter is nice for a typical Anchorage August day: in the 50s Fahrenheit and raining. 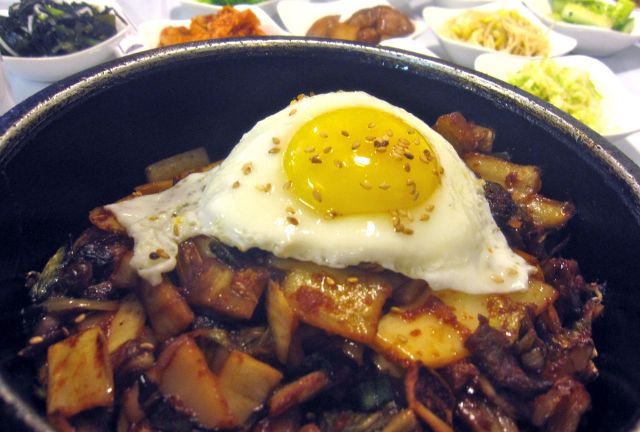 Kimchi bibimbap with the required fried egg. The other veggies are hiding behind the kimchi (Jeff Quackenbush photo)

My husband ordered dolsot kimchi bibimbap ($14.99). He noted for our Korean cuisine–cautious tablemates that cooked kimchi takes on a mellower flavor from its banchan brother. 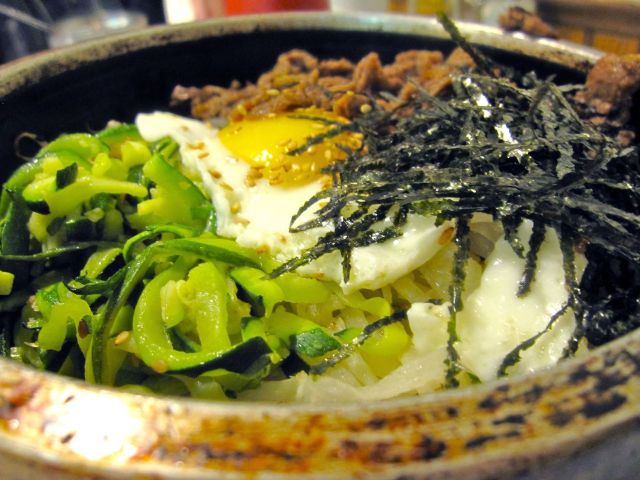 Royally Jeonju-style bibimbap: I decided I preferred having kimchi on the side this time around. (Tammy Quackenbush photo)

For my hot bibimbap, I chose to eat like a queen: 전주 Jeonju bibimbap ($15.99). This specialty of Jeonju incorporates cues from Korean royal cuisine. My dish was overflowing with veggies: shredded laver, carrot, radish, soybean sprouts and gosari. My taste buds appreciated a generous squirt of bibibimbap 고주장 gochujang (a sweetened version of Korea’s go-to spicy red pepper sauce) from the tabletop squeeze bottle.