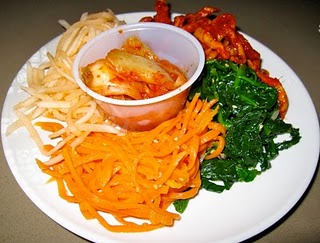 My husband, in-laws and I recently drove into San Francisco for a jaunt to the Asian Art Museum. After a docent-led tour of the Korean collection and walk-through of the remainder, we were very hungry. A Sorabol Korean restaurant was just down the road.

This Sorabol location is in a below-ground food court in the Westfield Mall  at 101 Spear St. near Union Square. There are six other locations around the San Francisco Bay.

The restaurant serves Korean barbecued meat, including bulgogi (beef), dakgui (chicken) and dwejigui (pork). They also serve fried rice, japchae (clear noodles with garlicy sesame-soy sauce) and steamed vegetables. There’s also a vegetarian bibimbap (mixed ingredients over rice, often with a lot of gochujang (spicy red pepper paste) on the menu as well. At the end of the line, you can pick a complementary cup of mildly spicy traditional cabbage kimchi.

There are a few reasons you should not mistake this for home-style Korean food: 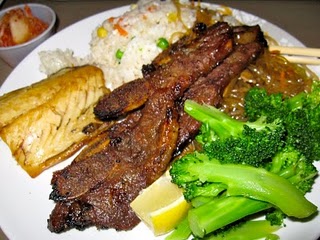 He and I agreed that guardian of the grill at this location did a good job with the galbi. It had the right balance of the sweet, salty, umami goodness people have come to expect from Korean barbecue.

The bulgogi, however, lacked the dish’s renowned subtle sweetness, which usually comes from the “secret ingredient,” the Korean pear, a.k.a. Asian pear or apple-pear. The marinade tasted heavy on the soy sauce and light on even another common Korean ingredient, sesame oil.

That said, both dishes did pay good respect for the cow that gave its life for the food.

The grilled mackerel retained the nice fishy flavor common for the dish when served in Korea. Yet unlike the common preparation in the Land of the Morning Calm, Sorabol cooks the fish as a fillet and not as a whole fish — internal organs, skin, fins, eyes, bones. The dish was seasoned well and thoroughly cooked but still moist.

My one disappointment was the “spicy chicken BBQ.” It was a little spicy, but there was way too much sauce — it was a bit goopey. The sauce had the vinegar-heavy tang of Buffalo wing sauce, rather than the sesame, garlic flavor that’s the trademark of Chuncheon dakgalbi sauce. (With Super Bowl fast approaching, check out my recipe for Chuncheon wings, the more savory, zippier alternative to Buffalo wings.)

And unlike the Chuncheon dakgalbi experience, the pieces of chicken were not chopped — or snipped to bits with shears, Korean style — small enough to eat comfortably with chokarak (chopsticks). It was enough to consider kimchi and the rest of the banchan as optional, but the thought of a knife and fork as required for Korean cuisine was baffling.

Granted, many Americans aren’t comfortable using chokarak. While in the Land of the Morning Calm, I knew one adult Korean who wasn’t adept with them either. But consider an analogous situation: Some people don’t like to grab slices of pizza with their hands, so should the many who do eat pizza hand to mouth be forced to eat with fork and knife?

I’m not going to argue too much with this Sorabol food stall though. It had the longest line in the food court, competing against Mexican, Italian, Thai, Chinese and Japanese menus.

Next time you’re in San Francisco and need a refill after hard-core shopping or museum hopping, check out Sorabol for “hot and a lot” Korean food.