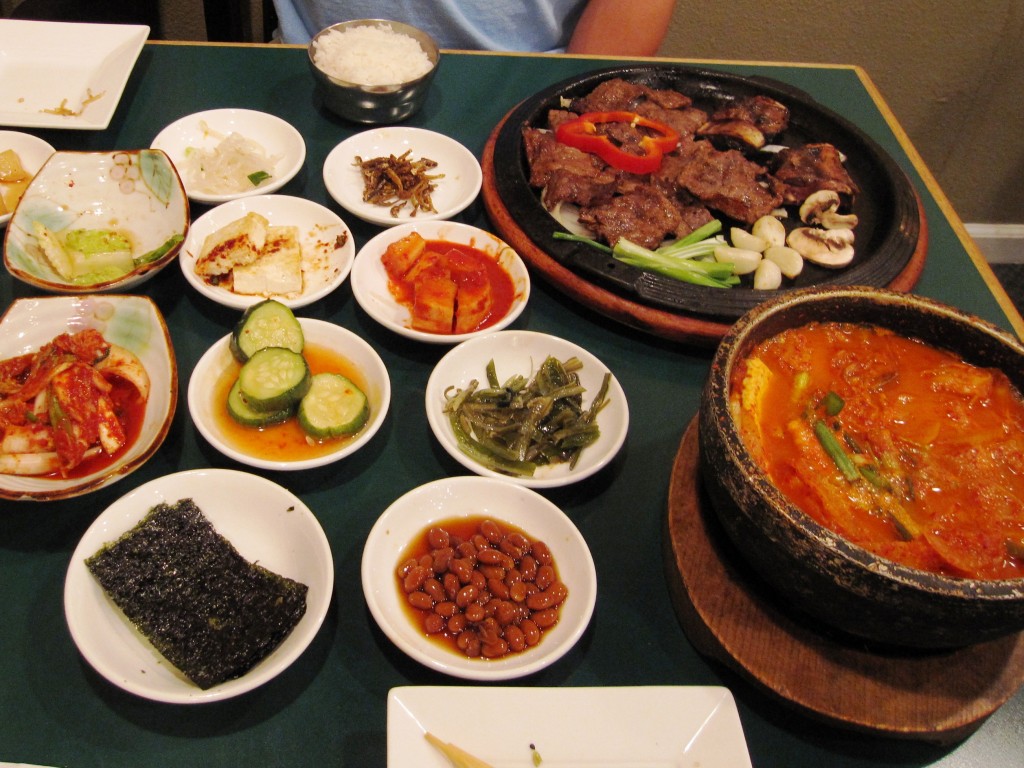 After a five-month stay in Southern California, I returned to the San Francisco Bay Area. I began to miss good Korean food following a few evenings in various Japanese restaurants.

Santa Clara is near San Jose in the South Bay part of the San Francisco region. A section of El Camino Real between Wolfe Road and Lincoln Street is known locally as K-town. While not as extensive as the real Koreatown in Los Angeles, this area in the city of Santa Clara has a variety of Korean cuisine. 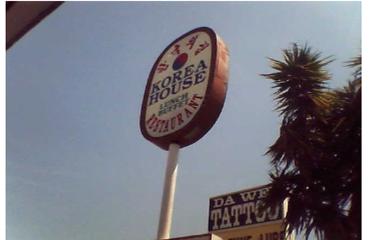 I’ve been frequenting Korea House since I moved to the Bay Area in 2000. It’s been consistently good, even though the restaurant has changed hands a few times. The service is still great, and the food quality hasn’t dropped off. The owner of the establishment greeted us after we sat down.

The menu is well-organized with a lot of suggestions for combinations of dishes — dinner packages of sorts. We ordered 김지 찌개 kimchi jjigae (kimchi stew) and 갈비 galbi (grilled ribs).

They usually bring out first a complimentary plate of 잡채 japche (cellophane noodles with a garlicky zesty sauce and vegetables). Then a couple of minutes later, the various 반찬 banchan (side dishes) come out in myriad little dishes.

A few moments later, we received our bowls of 밥 bap (rice), and you can’t help but start eating the rice with the various banchan. Who needs the main entrees anyways? In a number of restaurants, banchan have become the appetizer course Western diners recognize.

As we started filling up with bap and banchan, the dinner dishes makes their way on to the table. As is traditional, the kimchi jjigae is served inside a blazing-hot stone bowl, and the galbi is presented on a hot cast-iron plate.

The key to a great kimchi jjigae is, obviously, the kimchi itself. It has to be great-tasting and aged properly to give it that tangy taste. Our jjigae was seasoned properly, but the kimchi it was made from was just average in taste. Although the kimchi was aged correctly, the taste wasn’t quite over the top.

The galbi, on the other hand, was perfect in every way. The new owner did brag about how good the galbi was, and she wasn’t lying. The meat was not too sweet, was perfectly tender, and the smokiness was just right.

The first owner of this joint fed me like her own son. I have never left that place without feeling miserable due to eating too much.

The second owner kept the same food, but the service wasn’t quite the same.

The current owner seems to have her own recipes for the meat dishes. The service was great on my last visit, just like with the first owner. The owner even gave us more rice and banchan to take home with the leftover galbi, so we could have it for the next day’s lunch.