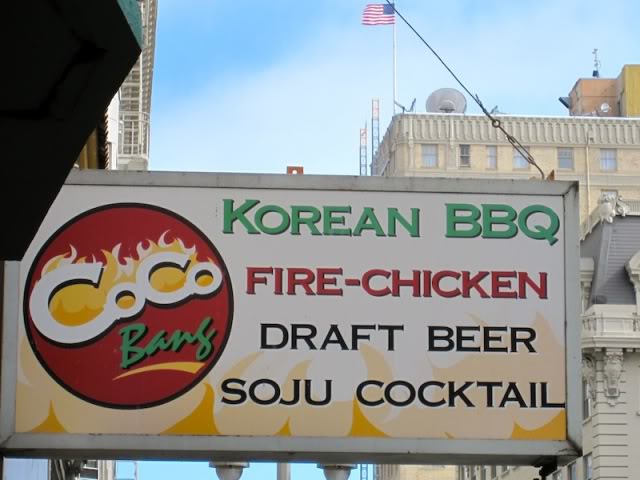 Cocobang is located  at 550 Taylor Street near San Francisco’s Tenderloin district within walking distance of Union Square and the Civic Center.

Owners Huh Joon-young and Hur Joon-seok, operating as Daebak Enterprise Corp., have created a small restaurant with about a dozen tables or so. (The city of San Francisco says the restaurant has less than 1,000 square feet, including the kitchen.) Yet our party of five could be seated comfortably. Our two tables were next to the front windows, so we had plenty of natural light to see our food. If we hadn’t been sitting near the window during daylight hours, it would have felt darker.

Some of the reviews from Yelp.com suggest a number of the patrons don’t show up or leave sober:

You don’t come here for the food unless you plan on drinking soju and beer, or if you have a craving for their fire chicken which is good on its own, but more amazing when you have a couple of beers and shots of soju in your belly.

Ok, it’s exactly what everyone says.  Only been here when NOT sober..and it’s not bad.  It’s not LA korean food good either.  But it’s not like we’re in a k-town…. Although, I bet this place would be ok sober. 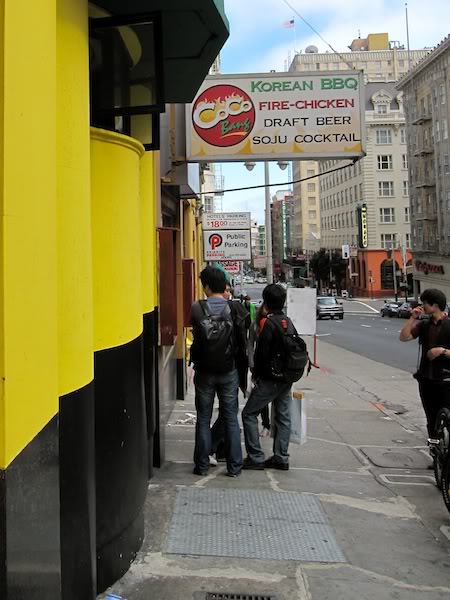 I considered it a good sign about interest in the restaurant that several people were queuing outside before it opened the Sunday evening I visited Cocobang. Since we arrived a half-hour before the 5:30 p.m. opening, we went to a coffee shop around the corner and came back just in time to be among the first patrons so we grabbed a seat closest to the window.

Korean network TV playing on the large screen gave the restaurant a sports pub feel without the play-by-play chatter. When I visited with family members, a variety show was rolling out one K-pop and other musical acts, prompting a flood of questions about Korean pop culture. If you don’t know any Korean — or Korean-English slang — walking in, you might pick up a phrase or two.

Dragging family to a restaurant for a review allowed me to sample five different dishes. Cocobang doesn’t necessarily serve dishes “family style,” but it does have a few “combo” selections with multiple dishes each. 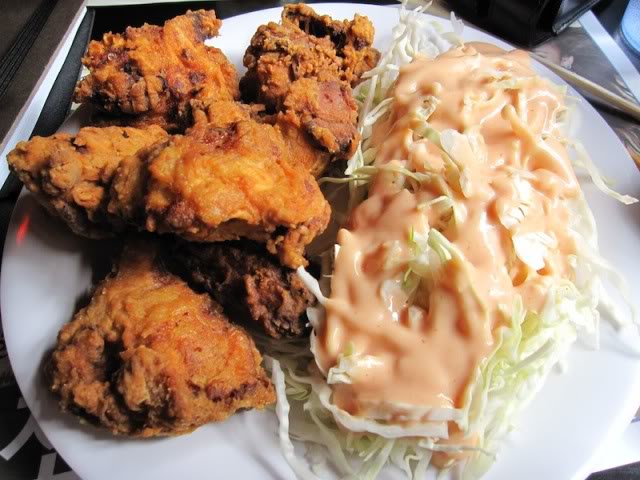 I noticed a subtle hint of Korean curry powder in the thin, crispy crust. Thanks to double frying, the chicken was cooked perfectly, without charring of the batter and little greasiness in the underlying meat. Colonel Sanders would be either proud or insanely jealous. 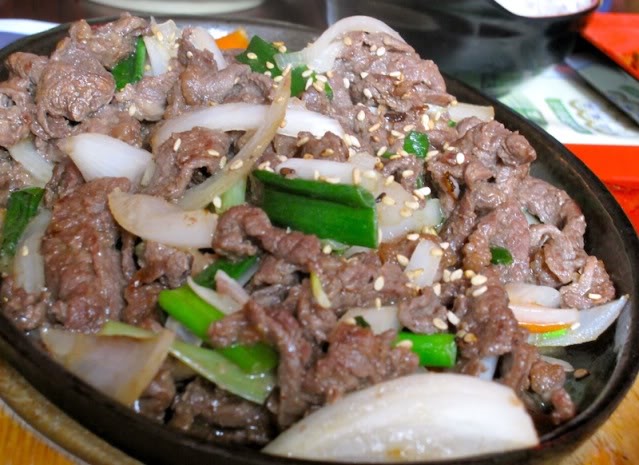 Bulgogi ($13.95) is a Korean restaurant favorite, because even the most spice-phobic person can try this savory-sweet sauteed beef dish, commonly served on a hot plate with onions, green onions and sesame seeds. My father-in-law likes the dish for that reason, and Cocobang’s version pleased his picky palate. The salty, savory, sweet components typically found in the marinade were distinguishable and had the familiar balance I’ve tasted on both sides of the Pacific. Traditionally, the marinade includes soy sauce, sesame oil and Asian pear puree. 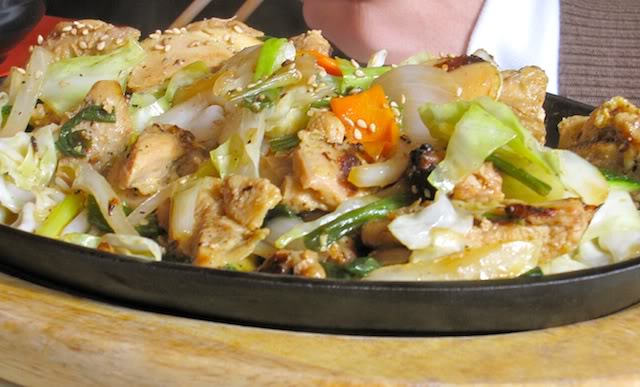 The sauteed chicken (dakgogi) ($13.95) was grilled in a similar manner seemingly with the bulgogi marinade. It didn’t have the spicy gochujang marinade common to most Korean chicken preparations, so it’s another good option for those who see the phrase Korean food and presume they need a gallon of water to quench the fire. 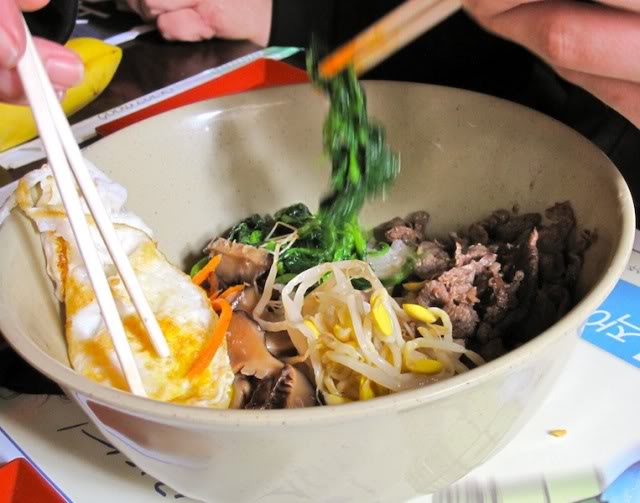 The bibimbap ($9.95) was served in a large bowl with a sunny-side-up fried egg, spinach, mung bean sprouts, mushrooms and beef and a bottle of bibimbap gochujang, a sweeter, tamer, less viscous version of the spicy red pepper paste found in a number of Korean dishes. Bibimbap is another Korean dish many Westerners enjoy. It has a lot of veggies over the bap (rice), the amount of hot sauce can be controlled and playing with the food is required to mix the rice, veggies and meat. 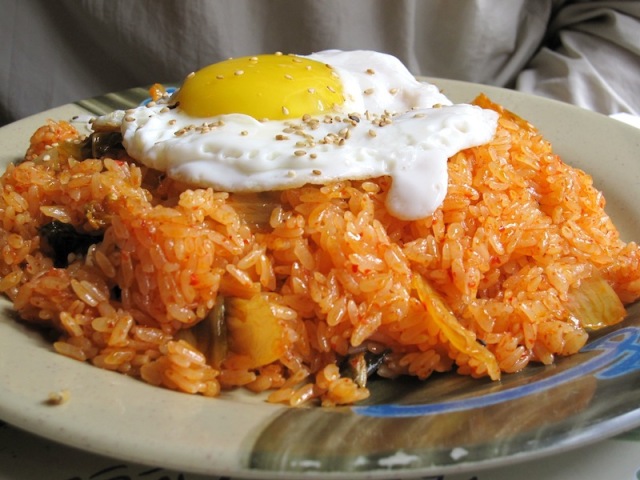 My husband ordered kimchi fried rice (kimchi bokkeumbap) ($9.95). Normally, the restaurant normally adds Spam processed meat to the mix, but the kitchen made him a pork-free version. The rice was not overcooked and mushy. My husband said it “had texture, almost al dente.”

Parking in San Francisco is notoriously inhospitable because the City purposely refuses to build new parking structures, but Cocobang is next door to a small parking garage so you can drive down for your Korean food fix if you aren’t within walking distance.

Another perk (besides the good food) is their amazing opening hours. Most of the nearby restaurants are only open until 10 or 10:30 during the week and 11 p.m. on Friday and Saturday nights. Cocobang stays open much later to catch the very late-night crowd.