I saw the mother-in-law.  She definitely looked Korean.

This NY Times review by Dave Cook of Eating in Translation intrigued me and several of my friends.  Korean-Uzbek food?  At Cafe at Your Mother in Law?  What could that mean?

It turns out that there is a sizable Korean population in Uzbekistan, who call themselves “Koryo saram” which means “Koryo people,” and they have been there for a surprisingly long time.  Korea, especially when it encompassed North and South, isn’t far from Far Eastern Russia.  Ethnic Koreans began migrating there in the mid-19th century.  After years of assimilation and integration into Russian life, the Koreans were deported in 1937.  Most of them ended up in Uzbekistan and Kazakhstan.  According to this article, many under 30 no longer speak Korean, but “[t]he level of self-esteem and ethnic identity among Korean adults is very high.”  So typically Korean!

So was the food typically Korean?

Some of the dishes clearly had Korean roots, but much of the food was Uzbek or Korean and not really both.

The Uzbek bread was flavorful, and as Catherine put it, sort of like a giant bialy.  The crust was present but pliable at the same time.  The kind of plain food you end up eating way more of than you intended to.

The “salads,” as Dave noted, were like banchan.  This is half a pound of “chim-chi.”  It looks just like Korean kimchi, but it had a much stronger ginger flavor and a rawer, more vegetal taste than I’m used to.

Much more popular with our crowd were the other pickles, the pickled fish and the pickled eggplant.  Eggplant is supposedly made into kimchi in Korea as well, but I’ve never had it.  This was lovely, firm, and tart.  The pickled fish actually tasted more like Korean banchan to me than the “chim-chi.”  It had the toughness I associate with dried pollack, that often gets made into a spicy Korean banchan with vegetables.  We loved this, too.  We were scarfing up these two small dishes, and almost ordered more before we realized we had a lot more food coming.

The lamb in the plov was as fatty as the NYTimes review promised.  Who doesn’t love a plate of greasy rice and meat?

These are manti, which tasted distinctly of lamb, served with a dollop of sour cream.  The sour cream is very not Korean.  But the Central Asian word manti may have morphed into the Korean word for dumplings, mandu.  These were absolutely delicious.  Thankfully, there were five, one for each of us.

The bowl of “kuksu,” which is Korean for noodles, was probably the most Korean-Uzbek dish of all.  The broth was tangy and sweet, not unlike naengmyeon, with plenty of lightly pickled cucumbers and shredded cabbage, as colorful as all Korean dishes aspire to be.  But there was quite a lot of dill, a flavor that is distinctly un-Korean.  As refreshing as Korean cold noodles.

The “fried chicken” was actually broiled or pan-fried and nothing to write home about.  (“Dear family in Korea, in Uzbekistan, we are eating chicken, but we miss dakdoritang!”)  Better to save stomach space for the meat crepes, which Mark saw being delivered to another table and quickly added to our order.

These were my absolute favorite.  The crepes were similar to blintzes, eggy and just slightly sweet.  The filling was, yet again, lamb spiced with cumin or another fragrant spice.  These were emphatically not-Korean, and I was glad that my people, somewhere far away, had come to claim these as their own.

We washed it all down with Russian beer and vodka, courtesy of Mark and Morgan and At Your Mother In Law’s BYOB policy.  That is very Korean, and I’m guessing, also very Uzbek.

Afterward, we sat on the beach and ate Russian pastries I’d bought earlier from La Brioche. 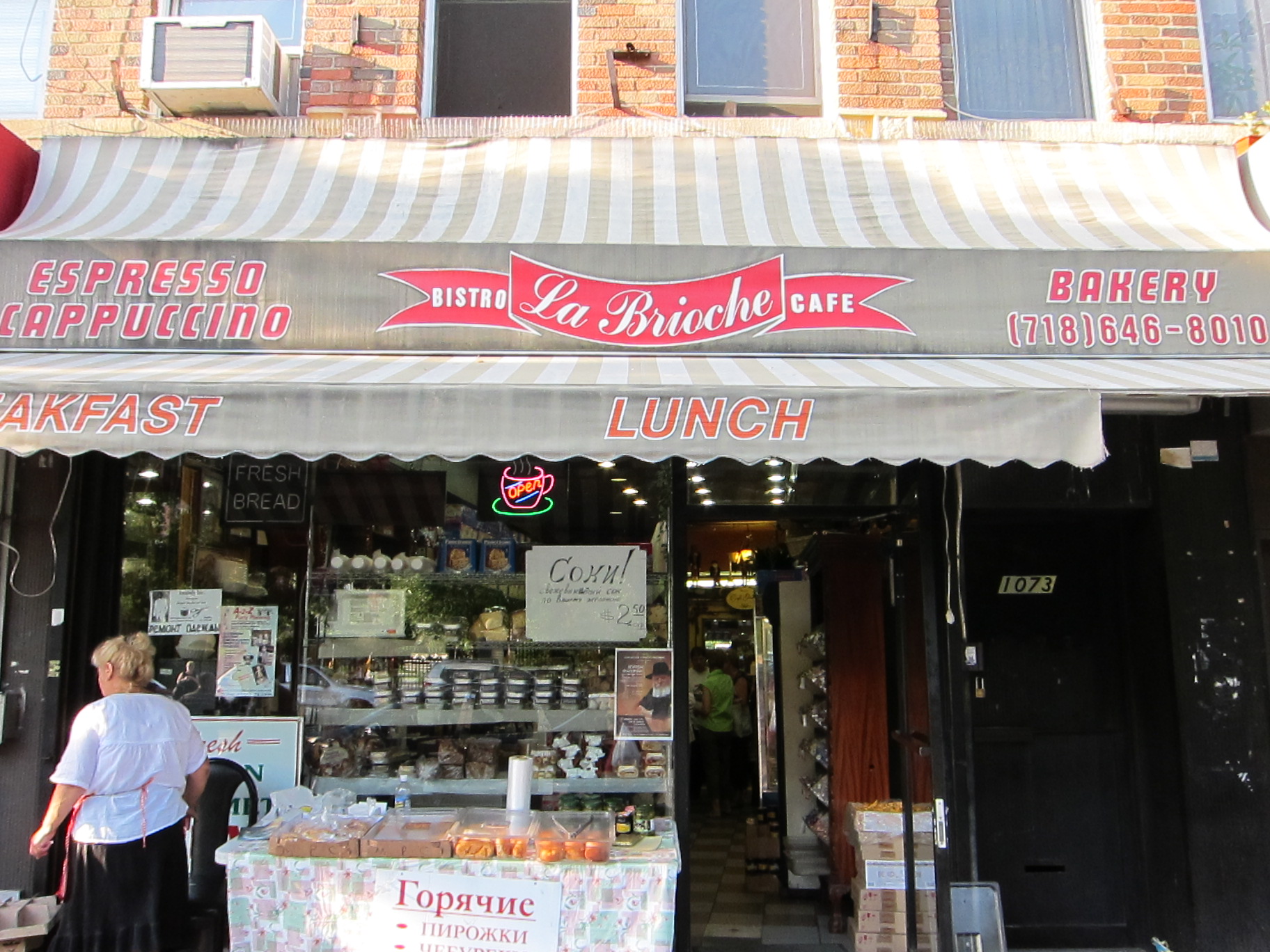 Russians, like Koreans, clearly believe quality in a bakery is indicated by a French name.

The best one looked like a Korean walnut cookie, except it was almost crunchy and filled with caramel.

Brighton Beach is a magical place.  You can find dumplings by the pound in a freezer case.

Not to mention psychic solutions.

But is there any better evidence of magic than Korean-Uzbek food in New York?