Many assume the territory between San Francisco and Sonoma County wine country an hour’s drive north is bereft of Korean cuisine. I did, too, until I discovered one long-disguised as a coffee shop. 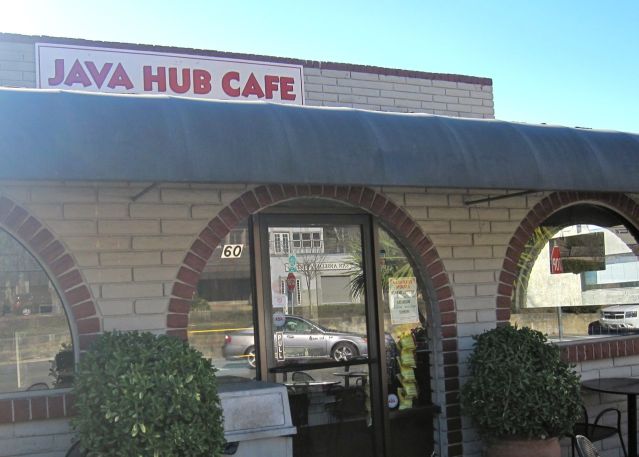 Java Hub Cafe is Marin County’s only noted venue for Korean victuals. It’s a simple coffee shop in San Anselmo, Calif., a suburb of San Rafael located about 10 minutes north of San Francisco’s Golden Gate Bridge. And it is well off the beaten tourism path of Highway 101, the Marin-Sonoma thoroughfare.

On entering the little cafe, I noticed the subtle sounds of acoustic modern folk and alternative music playing subtly from speakers. The large counter has a big posted menu from which to order.

Indoor seating is on barstools with a long table facing a large window. That’s nice natural lighting for food photography, but it offers an unimpressive view of the regular stream of traffic.

Outside there are more than half-dozen tables. It would be nice to enjoy coffee and a meal alfresco in the summertime. However, it’s now winter in California. Even though our winter days are mild compared to Korea’s, I still didn’t want to eat outside.

Tucked behind the coffee shop edifice is a restaurant serving all sorts of North Asian cuisine, including 갈비 kalbi, 비빔면 bibimmyun and miso udon. 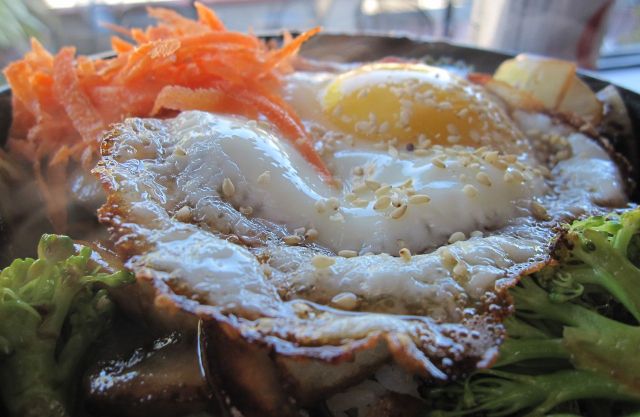 After waffling between ordering bibimmyun or bibimbap, I initially ordered the spicy bibim noodles (called bibimmyun in Korean, $7.25 USD). But owner Joyce Jung immediately advised me it would take about 20 minutes to make it. I asked if the bibimbap ($6.50 USD) would arrive more quickly, and she said “yes.” So I opted for the popular Korean dish.

The bibimbap arrived in a regular ceramic bowl — not the oven-heated stone bowls of dolsot bibimbap — with steamed white rice, raw shredded carrot, sauteed mushrooms, steamed broccoli, a sunny-side-up fried egg and a couple of tablespoons of 고추장 gochujang.

After thoroughly mixing items together with the supplied fork. The raw carrots and lack of marination of the ingredients made the Java Hub version not as sweet and garlicy as the dish often is in traditional Korean restaurants. 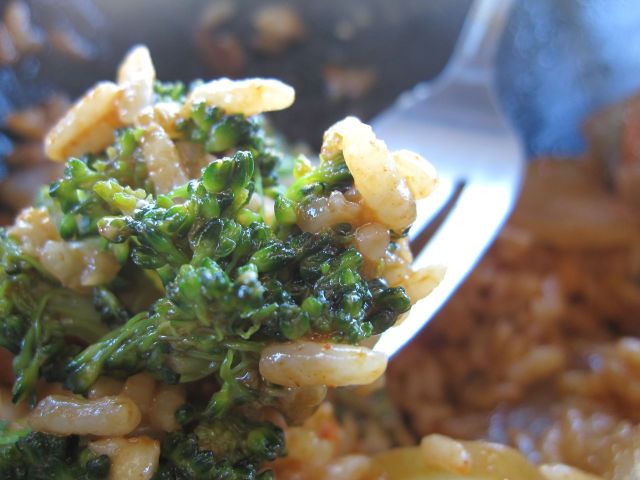 Non-Korean vegetables such as broccoli may surprise some, but as a big fan of broccoli I enjoyed it very much.

Jung told me Java Hub has been open at this location for 10 years. Originally she only served coffee, tea and typical coffee shop fare like bagels and sandwiches. However, she soon found she needed to offer something more to keep the doors open.

“I noticed that business dropped off in the winter, and I started offering hot meal options to draw winter business,” she said.

So she began offering familiar Korean and Japanese dishes to her menu as well as other hot items like hamburgers.

The mix of coffee joint and Korean restaurant may seem eclectic. Yet while I was talking to Jung after my meal, one of her customers, waiting for his “usual order” of a bacon cheeseburger, opined, “Her burgers are the best anywhere.”

If 빨리 빨리 bbali bbali (“Hurry, hurry!”) is your battlecry and you just want a quick coffee to go, you can place your order from the drive-through window. Jung makes the coffee herself and will bring your order to your car.