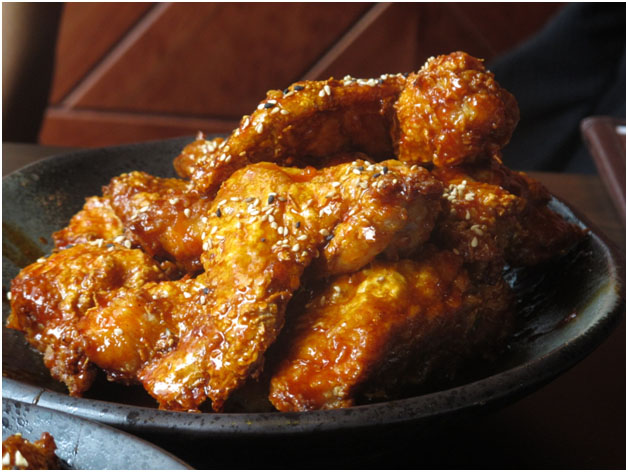 In the early afternoon here in Seoul, Korea, a delightful smell is just around the corner.  As my friends and I head for the restaurant, the fresh aroma is coming from not just any Korean restaurant.  While Kimchi, bulgogi and bibimbap may be Korean staples today, this sit-down eatery is a chicken place.   And their chicken did not disappoint.

Last week, I had the pleasure of eating at Oppadak – which translates to the cute Korean saying “Big brother chicken” (the full name actually translates to “The chicken that fell out of the oven”).  This chain of chicken restaurants are all over Seoul and after eating their chicken, I understand completely why.  The chicken is that good!

While comparisons to American food chains KFC and Popeyes will come to mind for people that read “fried chicken” place, rest assured that Oppadak distances themselves from those food chains.  The taste and texture of Oppadak’s chicken attest to this.

“I’ve been waiting to eat this chicken all day,” one of my friends says before digging in.  Him and I both.

Oppadak features a variety of chicken from baked and rotisserie to honey and spicy flavors.  Their chicken comes in skinless or with skin.  Their skinned chicken, I would say, has a lot of juice and crisp in it.  When ordering a basket of chicken, rather than having one chicken part (such as a thigh, wing or breast) the basket is filled with a variety of parts.

For people that like their dipping sauces, barbeque, honey mustard, and spicy flavors are just some sauces they offer. 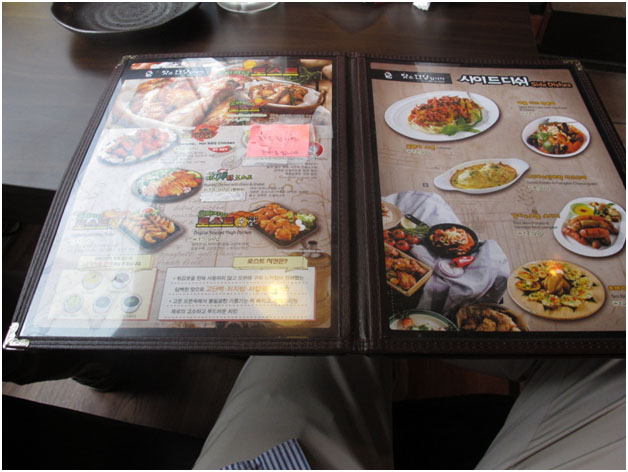 The place is moderately expensive. Yet with a party of people the bill gets considerably cheaper.  A full basket of chicken is about W12,000, which can usually feed two people.  Beer is about W3,000.

For a party of four ordering two baskets of chicken and some beer expect to spend about W40,000.

Oppadak is quite popular among the young crowd.  While I’ve been there during times when there are only a couple of people, this is the exception.  Both Koreans and foreigners love their chicken, so expect to see a full restaurant.  At night time, the combination of chicken and beer makes the place even more packed than usual.  The plus side of this is that the sit-down is open until midnight or even in the early morning in many locations, making it an attractive place to go to after spending the day shopping, coming back from the noraebang (karaoke), clubbing or coffee.

Also something to note: this place is absolutely nuts during the winter.  Since Korea is brutally cold (don’t let those Korean dramas fool you that Korea has nicer and warmer winters), hot chicken is a great cure to fight the cold.

If you’re visiting Seoul or live in the metropolitan area, and you’re a fan of chicken, you owe it to yourself to go to an Oppadak.

Just be prepared that it will get messy when digging in the chicken.  But it won’t disappoint!

To Find Out More

Jason Yu is honored to guest post for the popular Korean food blog, ZenKimchi.  As a fan of food, anything Asia, learning, and hip-hop, he is a professor by day and programmer by night.  He currently develops his website devoted to Asian pop culture, GreenTeaGraffiti, under his alias “Jangta” from Seoul, Korea.  Check out his site and for the latest in food culinary, please continue to read ZenKimchi.