Vintage Review: On the Border 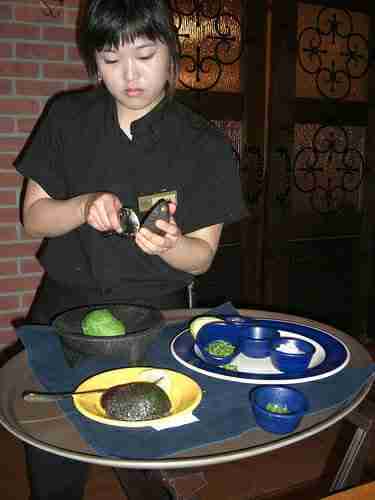 My goodness, how starved we are for anything resembling Mexican food in Korea!  Back home, chain Tex-Mex restaurants like these were where the yuppies and frat kids hung out--not places for real Mexican cuisine.  (Sorry folks, cheddar, Monterey Jack and sour cream aren't authentically Mexican, though crema fresca is.)  Yet it is a much desired taste of home when one is tired of eating food slathered in red.  If you like gunky platters covered in so much cheese and sauce that you can't recognize the individual elements, On the Border is your place, though they aren't as egregious about it as the worst offenders back home.  In full disclosure, I cut my culinary teeth working in a Tex-Mex kitchen for a year in the mid-90s.  So I know the tricks in the kitchen and am a bit jaded.  Nonetheless, there are some items that sparkle there.  The Sizzling Fajita Salad isn't one of those salads for dieters (this video sums it up nicely).  It's big and will fill you up for a couple of days.  The Carne Asada Steak Tacos are a bovine carnivore's muse.  The Queso Live is one of the "show dishes," like the sizzling fajitas that get everyone's attention or Chili's (owned by the same company) Presidente Margaritas, which servers shake all the way to the table.  The Queso Live is guacamole prepared table side like a classic Caesar salad.  On the Border incites great passion in favor of and against.  Just note that if you liked places like Chili's and are willing to pay almost twice as much for the same food, this is your place.

Okay, I've ho-hummed an expat sacred cow.  Gonna hear it in the comments.

The web site has great maps and up-to-date locations.