Nashville Hot Chicken has hit Seoul. There’s been buzz about this new style of fried chicken in Seoul, a feat that is hard to imagine in a country that alleges to have more establishments selling fried chicken than there are McDonald’s worldwide.

What is Nashville Hot Chicken?

For those of you who don’t know, hot chicken is a Nashville specialty, where crisp battered chicken meets fiery chili-infused butter and lard. Unlike buffalo wings, it lacks the acidic tang from vinegar-based hot sauces and stands in stark contrast to typical Korean fried chicken, where most flavors are variations on sweet and syrupy coatings. Hot chicken truly is a distinct preparation of the popular meal. It has incredible flavor when done right.

Rocka Doodle was created in part by Tyler Sohn, a former Manimal team member whose childhood was dotted with frequent tips to Tennessee (Sohn’s parent’s were from Nashville).

To recreate the classic Nashvillian dish and keeping in line with the Manimal ethos, they did research, pouring over videos and articles on hot spots like Prince’s and Howlin’ Rays.

In June of this year, Rocka Doodle launched a one-day pop up at Vato’s Urban Collective space and used that feedback to tweak their menu before finally soft-launching a permanent location in the Itaewon area in September.

Brave Rooster’s [sic] had their soft launch in November before finally having their grand opening at the beginning of December.

In the month prior, the Brave Rooster’s team had traveled from L.A. to Nashville, visiting many popular fried chicken establishments in hopes of gaining insight into the essence of hot chicken.

With their opening timed dubiously close to Rocka Doodle’s, some folks were tempted to call out Brave Rooster’s efforts as a clone of Korea’s first proper hot chicken restaurant. I don’t necessarily believe this was the case. Aesthetically, it’s pretty clear that Brave Rooster’s roots come from benchmarking the unbelievably popular Howlin’ Ray’s in Los Angeles, perhaps as an effort to emulate the 2-3 hour wait times at the small Chinatown restaurant. Homage is further paid to Chef Johnny Ray Zone’s Los Angeles establishment with Howlin’ Ray’s merchandise and videos posted proudly on the wall.

Every inch of Rocka Doodle oozes a distinct sense of personal taste. You walk in: skateboards, school cafeteria trays and other trinkets intersect American nostalgia with a modern street wear flair. The music selection is curated with a mix of old school hip hop, soul, R&B – the likes you’d never see in a hof. The space is small, and the seats tend to fill up. 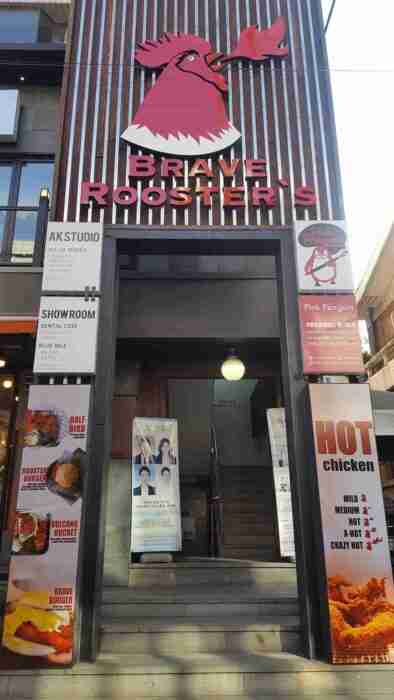 Located in a huge space on the second floor of Garosugil, Brave Rooster’s venue captures some of the vibe from the famed Howlin’ Ray’s, featuring large white walls and bold typography. 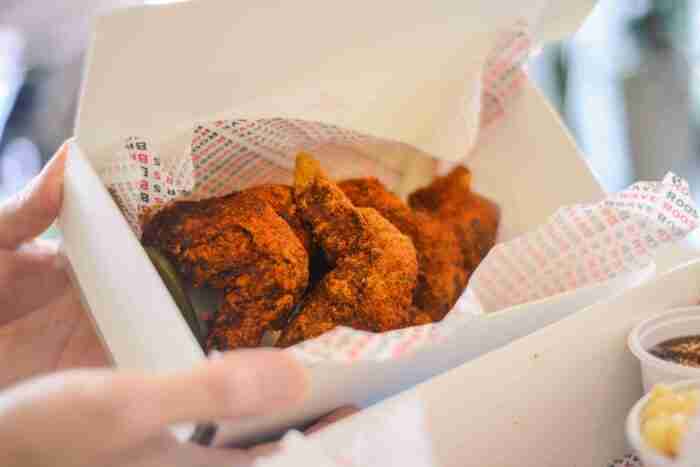 Brave Rooster’s further replicates the Howlin’ Ray’s style by serving their food in paper takeout boxes. The staff even borrows the scripted call-and-response shouts typically heard from Howlin’ Ray’s kitchen when expediting orders. Don’t be startled when the staff loudly calls back to the manager indicating that an order has been placed, it’s just part of the process. Despite going there during lunch time, club music was blasting from the speakers, beats dropping like Itaewon nightlife.

For hot chicken you’d want to look for something that is “served glistening red from the cayenne & lard based paste, smoky not obviously sweet, with an option to have it extremely spicy with just pickle chips and white bread.” 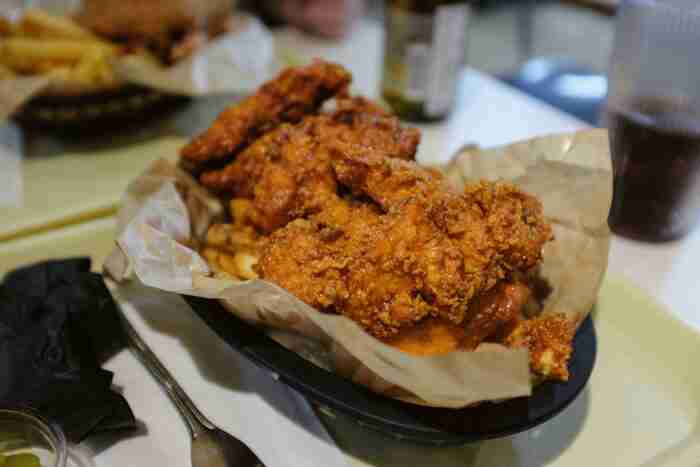 For Rocka Doodle, it begins with a labor intensive endeavor to craft each bite. Every piece of chicken takes up to two days of preparation, spending a day in a brine before going into buttermilk for another. This extra work pays off in the final product: juicy, crispy and flavorful. Or, what some might call the platonic ideal of chicken. Even the white meat, which I tend to avoid at at most restaurants, is juicy and flavorful; it’s truly one of the best executions in recent memory. The fried chicken is then dipped in a chili-infused butter and lard combination, which is smoky and fragrant. The batter is light, elevating the moisture saturated chicken while acting as a ideal vehicle for the spicy oils. 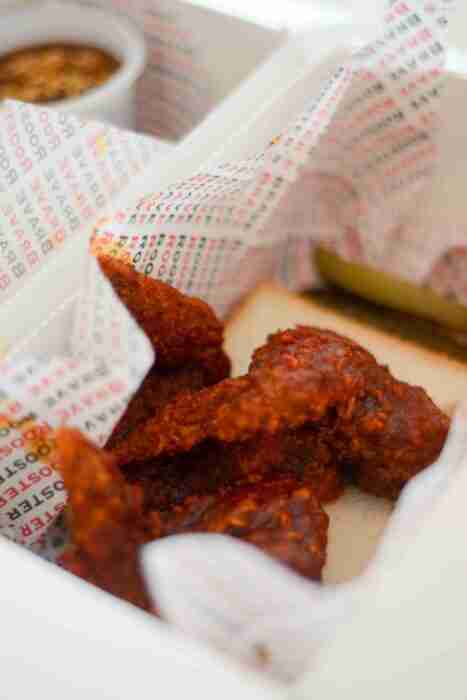 Though Brave Rooster’s imports a lot of Howlin’ Ray’s visual experience, the flavors of a Michelin-restaurant-experienced trained chef are obviously harder to replicate. In general, the standard fare is okay. The chicken is moist, suggesting a thorough brining process. The breading lacked any distinct crunch, while the chili flavor was simple, if lacking nuance. They follow traditional preparation and serve the chicken on top of slices of plain white bread (which Rocka Doodle ditched from lack of customer interest).

It should be noted, however, that even though pickles are an integral part of the Hot Chicken experience, the pickles served at Brave Rooster’s are sweet, which some might not appreciate. 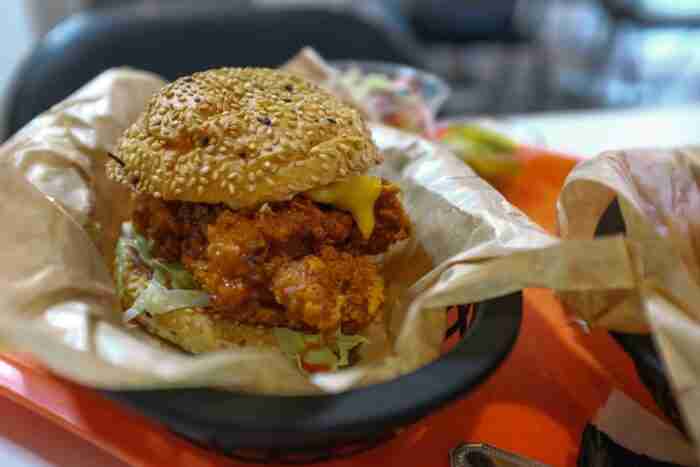 Rocka Doodle varies whether they serve white or dark meat depending on the sandwich and its toppings. In general, all the flavors complement well, the individual ingredients don’t feel out of place. The boneless meat in the sandwiches get the same treatment as the normal chicken, I particularly enjoyed the skin-on thigh meat, which added an extra textural component to the sandwich.

Rocka Doodle has so far been releasing new creations every month or so. Therefore, anticipate a growing menu as time passes. 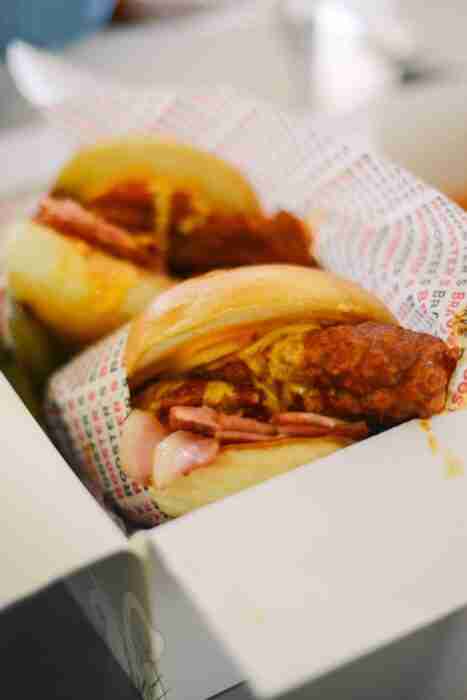 Brave Rooster’s offers two sandwiches. We ordered the Rooster Burger, which is essentially the Brave Burger with added egg and bacon. The oblong piece of white meat was admirably moist, but didn’t quite fit the bread, meaning awkward filling-less bites were common. The bun probably would have been well paired had it been toasted (it wasn’t).

The bacon is topped generously, but is pale pink and limp (not crispy). Furthermore, the expectation of a runny over easy fried egg (like the promotional photos) was quashed when I found a fully cooked egg tucked away under the breast meat.

Despite the strong effort, none of the components seemed to work with each other, owing to misses on crucial details. 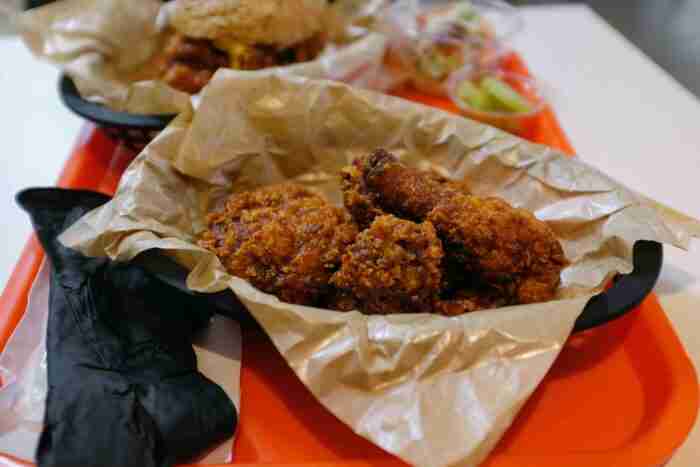 The chili grease at Rocka Doodle is delicate and fragrant. The Carolina Reaper imbues with butter and lard giving it a definite heat. There is a hint of brown sugar sweetness, but it’s subtle and works as a nice complement to the spicy grease. If you are a serious chili-head in search of the face ripping Carolina Reaper experience, even the newly minted level 4 might not be the spice you were looking for. They have added higher levels of heat since opening, so it’s fair to assume that spicier levels might be on the horizon, but you could always ask for an extra shake of cayenne or Carolina Reaper if you’re really in need that extra heat (I know I did).

For most, the spice levels offered at Rocka Doodle will be plenty spicy, however. 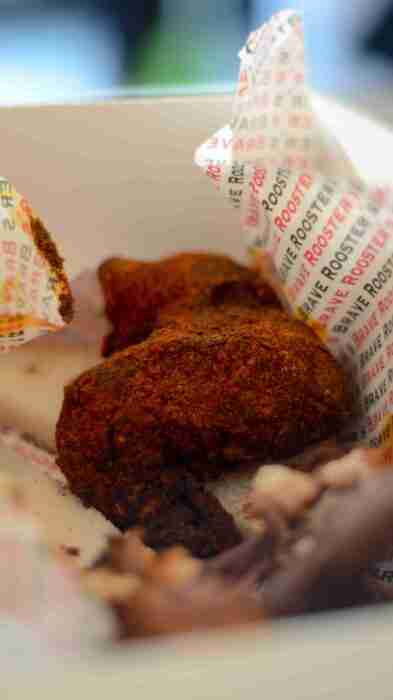 The hottest level at Brave Rooster’s is “crazy hot”. As a preface, the spiciest level at the benchmarked Howlin’ Ray’s in L.A. features an undeniable amount of heat, bringing even the toughest spice eaters to their knees.

Despite the heat, the blend of Carolina Reaper, Bhut Jolokia and Habanero is smoky, bright, complex and delicious, making the challenging venture worthwhile in the end.

Brave Rooster’s “crazy hot” begins with a waiver, which is followed by a loud alarm and red sirens that ring and flash throughout the restaurant. The staff stared at us as we scribbled our names on the form (we were apparently the first ones to ever order this level).

The Crazy Hot chicken is served, blackened from caked on chili peppers. Visually, it is reminiscent of the preparation at Prince’s (the original hot chicken restaurant, though Prince’s only uses Cayenne peppers, if I recall correctly), and the fruity scent of hyper spicy chilies hits the nose immediately as the boxed food is set on the table.

Served on the side is a digestive aid packet (so your stomach gets protected, they told us).

You grab the wings and realize there is as much chili powder on top of the breading as there is flour in the batter. You take a bite and the only flavor you register is aggressive grainy bitterness before an intense heat builds up. It’s easily one of the spiciest things I’ve eaten in Korea. Even for a spice enthusiast it will likely be a challenge.

Honestly, disregarding the heat, the flavor is completely awful: very bitter with no balance otherwise. Furthermore, the jump in heat between the highest and penultimate levels is probably in the orders of magnitude. I don’t recommend this level, even for those looking for a challenge.

I, for one, am very excited about the rise of hot chicken in Korea.

Rocka Doodle’s careful execution of Nashville hot chicken definitely puts it among my favorite new places to eat in 2018. Even while making minor changes to localize the experience, they’ve managed to faithfully recreate the essence of hot chicken in Seoul.

On the other hand, I can appreciate Brave Rooster’s for putting in a real effort to bring the Nashville classic to Southern Seoul, investing in a chance for their team to travel all the way to Tennessee through California to give Gangnamites a chance to appreciate a non-sweetened but spicy fried chicken option.

The menu at Brave Rooster’s also features a number of sides as an option, which are honestly pretty good (though small in portion). The chicken is just okay. Perhaps they’ll need some time to work out some kinks. It’s still early for both of these restaurants, having only been a few months since hot chicken hit the scene. So expect some refinements and perhaps some more competition (I’m looking at you Lords Chicken), along the way.