When I ride above-ground transportation through Korea, I like to play a game where I read as many Korean signs as I can before they pass by. As a result, my reading speed is about at the level of a five-year-old’s. On the bus home from work last week, I caught this sign at the corner of my eye. 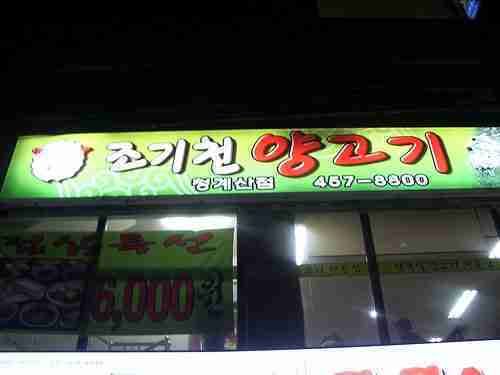 Did I see that right? Yang-gogi?? Lamb?? Now, in the past, I’ve seen some restaurants advertise “Yang Gobchang 곱창” which has nothing to do with meat that bleats. So I was ready for disappointment. But then I noticed the cartoon lamb on the sign.

The next day, I mentioned it to my boss when he suggested going for beer after work. Chris, Chris and I walked from work Friday evening to this place I spotted. It looked more and more like it was an honest to goodness lamb restaurant. The plants outside indicated that it was new. When we walked inside, the smell confirmed it.

Get ready for some lamby goodness!

Now, generally, I have heard from Koreans that lamb is not a popular meat. Too gamey. They don’t raise sheep here, so it’s all imported from New Zealand. It’s a very foreign meat. You’d might as well put a zebra on the grill.

Despite this assumption, the place was packed. The location is in Indeogwon in northeast Anyang, otherwise known as the “Ajosshi Playground” because it’s where the government workers in nearby Gwacheon go to have some good times–and they must really enjoy getting massages from blind people, considering that’s the dominant business in that area. 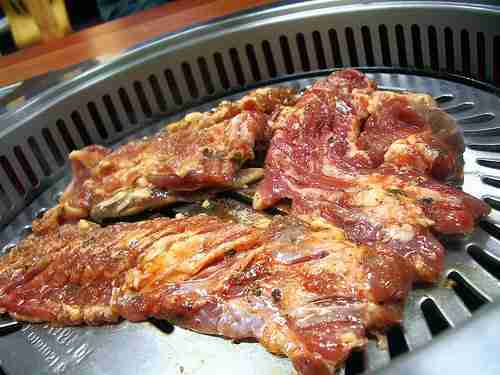 I’ve said it many times before. Lamb has been begging for a Korean interpretation. It’s the perfect marriage. Sometimes when you get “lamb” in Korea, it’s mutton. But this meat was clean and subtle in flavor. It was real lamb. The marinade enhanced its natural taste rather than cover it up. Even better, this was sutbul gui 숫불 구이, meaning it was cooked over charcoals at the table and not over plain gas. 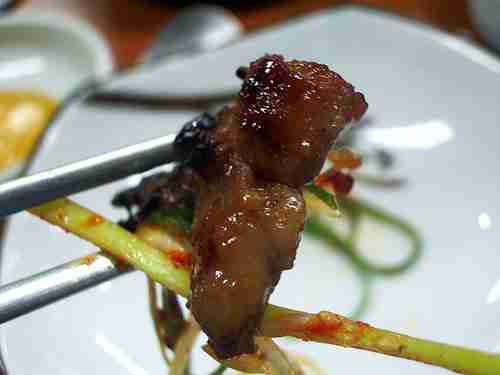 The side dishes stood out too. We went there two nights in a row, and most all the dishes had changed. Nothing was mediocre. The lamb also comes with a honey mustard and a smokey hot sauce for dipping. 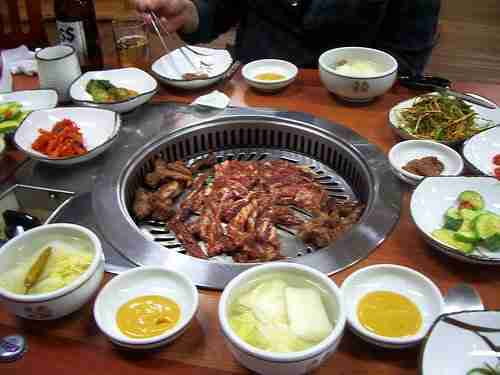 The menu tries to incorporate lamb in a hearty handful of traditional Korean dishes, including Galbi Jjim 갈비 찜, Jeongol 전골, and, can you believe it, Yuk Hui 육회–Korea’s steak tartare.

We ordered the Yuk Hui on the second night, and it was one of those times when Jennifer (Fatman Seoul) did one of her faces that looked like something naughty was going on in her brain. Rob (Roboseyo) liked it too. Again, it was clean, freshly made and only had a subtle lamb flavor. The sauce was fruity with a slight hint of heat. It’s the closest lamb has come to being dessert. (Hopefully Jen will send me the picture she took soon.)

To get there, head to Indeogwon Station (line 4) and head south along the right side of the road. Turn right at the river. It’s on the second floor.