There’s something I’d say for Korea that I wouldn’t say for America–there are some freakin’ good restaurant franchises that I’d recommend even over independent restaurants. Their quality is consistently good. These Korean restaurant franchises would also be great brands to export. I’m leaving out the fried chicken and non-Korean-food franchises as they require separate posts. There are many other franchises out there, and some are good. But they’re either not great (Bon Juk, Baekje Samgyetang), or they are inconsistent (Andong Jjimdalk, Omogari Kimchi Jjigae). 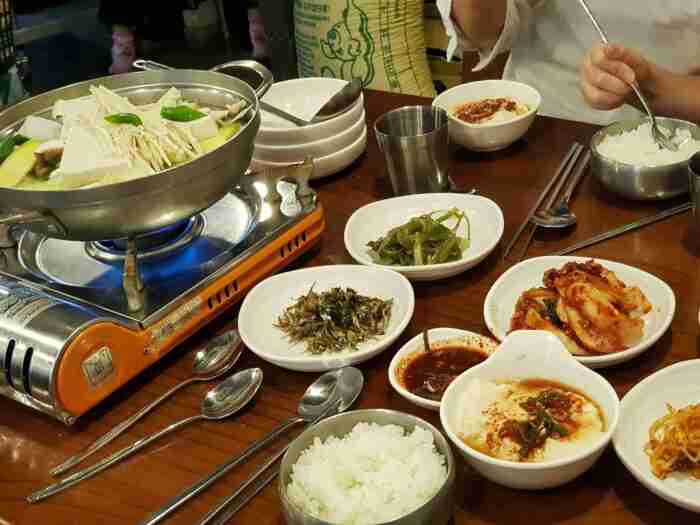 Even though the name sounds like a superhero, it means something like, “Only from the Millstone.” This is my new favorite franchise, and they’re expanding rapidly. They specialize in tofu. Housemade tofu. They make it out front behind the window for everyone to see. Korean tofu converts people who hate tofu. It has a rough masculine quality. 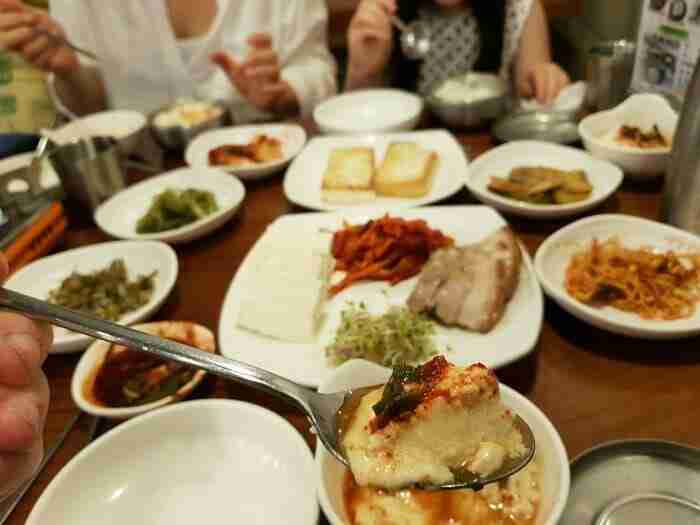 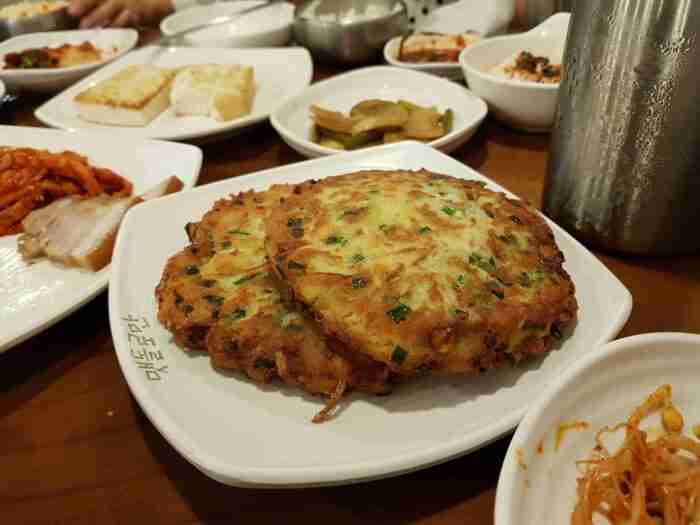 Get their Dubu Bossam set, which includes some tender pork belly with tofu and wraps. Also get their Dubu Jeon, which is a crunchy pancake made solely out of tofu. Pure protein. I can’t find a website for them, and it looks like each one of their storefronts is slightly different. Just copy and paste 맷돌로만 on Google and Naver. 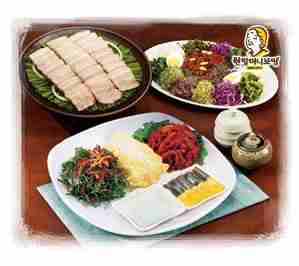 Yeah, it’s just bossam. But it is consistently good. We tend to get it delivered, but I think it’s best in the restaurant itself. The banchan is always diverse and tasty, including that sweet, fruity fresh kimchi. They have lunch specials that will fill you up. 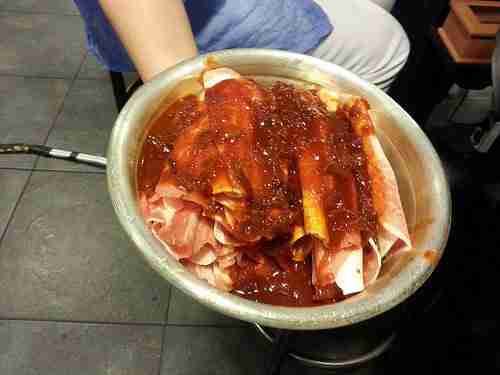 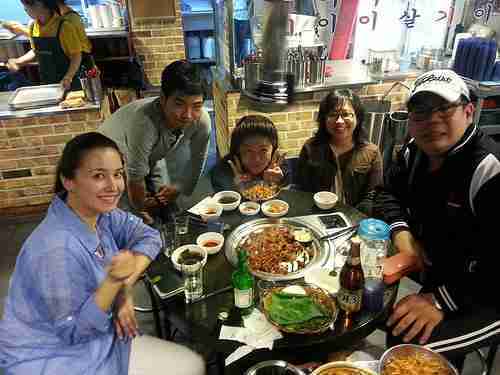 This Korean restaurant chain has been getting quite popular with Koreans and expats. They are part of this 1970s nostalgic trend. Look at the lattice-work on the doors and the general feel of the place. Some locations even have marshaling anthems blaring outside, harkening back to, um, simpler times? I’ve been a fan of their hangjeongsal and geopdaegi (pork skin), but the thing to order (thanks, Lisa Kelley) is the Yeoltan Bulgogi 열탄불고기. It’s shaved pork smothered in spicy sauce. Toss that on the grill and make sure you have your favorite bev handy. This is the star franchise of celebrity chef Paik Jong-won. This guy is notorious for sticking his face on EVERYTHING. The guy has franchises for most any product, including coffee. Most of his franchises suck, but this is the one good one. 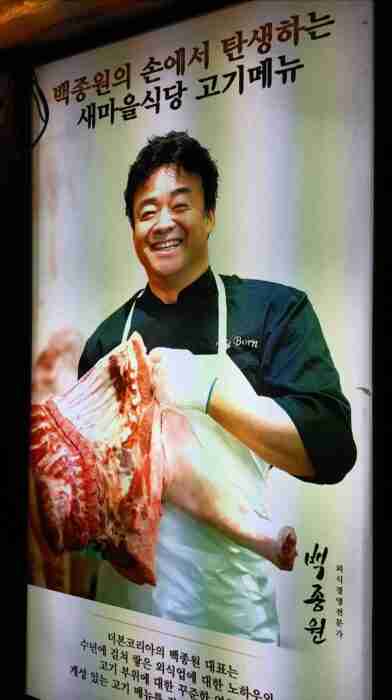 Look for the place with the yellow roof. 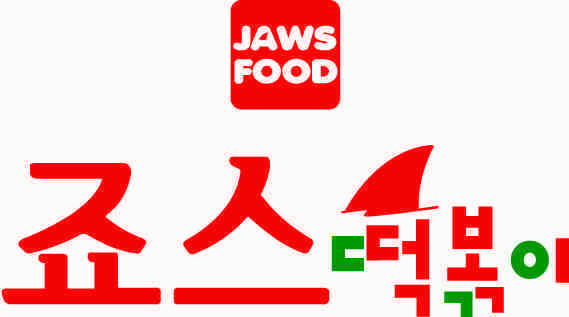 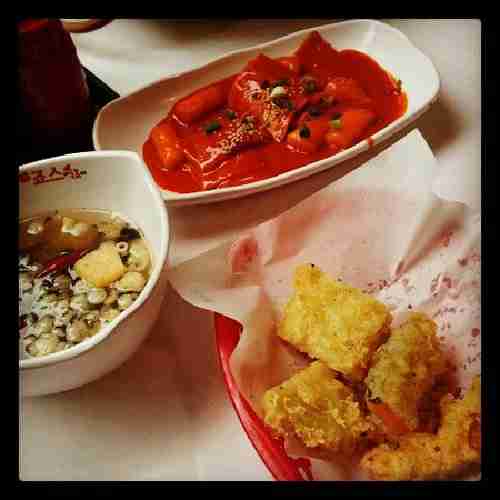 The legend of Jaws goes like this. A guy quit his job and wanted to start a tteokbokki hut. Yet he didn’t know the first thing about making it. He spent months in the kitchen perfecting his recipe. The result is a spicy and addictive tteokbokki. But Jaws doesn’t stop there. They also serve a meaty soondae sausage, hearty odeng fish cakes, and super light and crispy twigim (tempura). I like mixing it all together with the thick tteokbokki sauce. 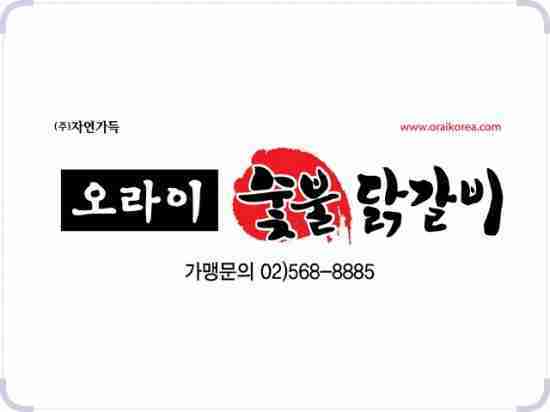 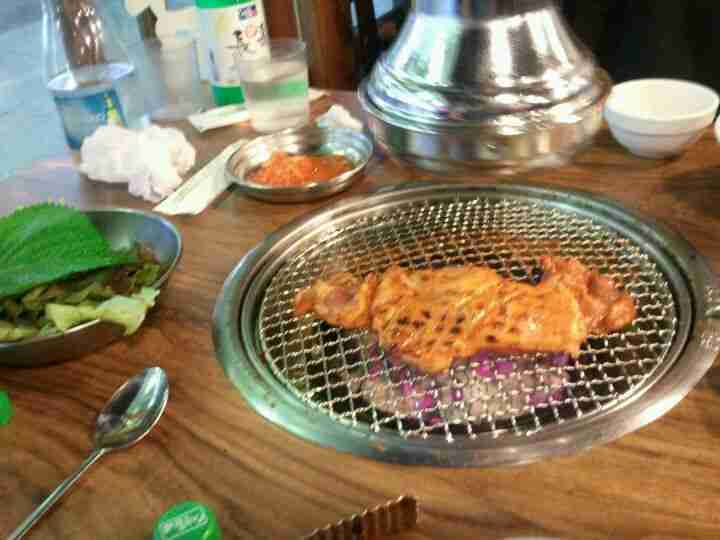 When I was in Chuncheon, the DalkGalbi capital of the world, I noticed that there were restaurants serving a sutbul (charcoal-grilled) version. Soon after, this Orai opened in my town of Anyang. This is great stuff! Dark meat chicken marinated in a sweet spicy sauce and thrown on the charcoal grill in front of you. Yes, you don’t get the usual fried rice at the end, but by then you’re on your third order. It’s reasonably priced as well. One order will feed two people–or one Joe. I’ve had this at another location in Seoul, and it is just as good there. 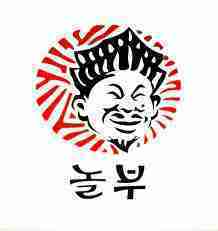 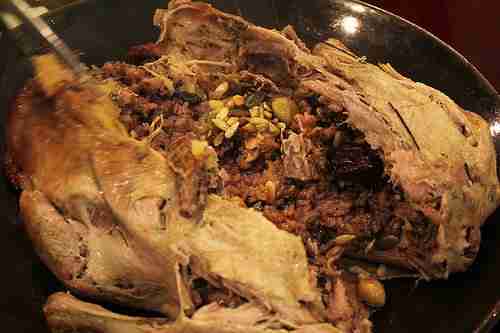 Nolboo is hard to peg. They’re a brand that has many different types of Korean restaurants. Some do Budae Jjigae, some do Clay Pot Duck, some do Galbi Jjim. In most cases, they serve high quality versions of whatever dish they specialize in. The Clay Pot Duck, Yuhwang Ori 유황오리, is the closest you get to Thanksgiving dinner in a Korean restaurant. The duck is stuffed with rice, various seeds, fruits, and Chinese medicinal ingredients. It’s then baked in a clay pot for a few hours. The result is this steamy tender meat with this aromatic stuffing. Bring a bottle of pinot noir for this one. The Budae Jjigae restaurants do the classic “army base stew” with the classic spam and hot dogs. But they also add little bonuses like pepperoni. Their Galbi Jjim restaurants serve taste-bud-obliterating spicy ribs that I can’t get enough of. 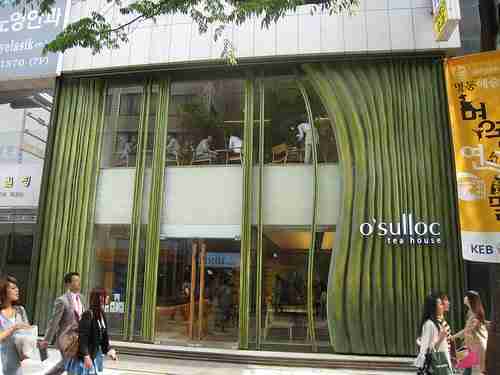 They’re not really a restaurant. They’re a tea purveyor. They have cafes in Insa-dong and around town. They open booths in high end department stores. O’Sulloc is a Jeju-based green tea producer that has shown how world class Korean tea can be. They’re not cheap, but unlike many Korean companies that sell products at premium prices, O’Sulloc’s teas are truly premium. Their basic green tea, which they roast and brew for free samples in Insa-dong, packs so much of a punch that you won’t return to the sawdust in the teabags. The complexity makes it so interesting. They don’t just do green tea. O’Sulloc carries a large swath of flavored and themed teas. They even have some super posh black box teas. Most of them would make perfect gifts. 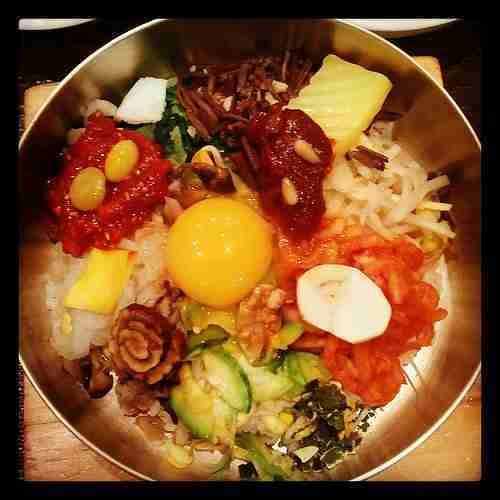 Based in Jeonju, home of the pinnacle of bibimbaps, Gogung brings this famous dish in its most Platonic ideal. When you see gorgeous colorful photos of bibimbap, this is the type they serve. The signature Jeonju bibimbap comes in a brass bowl and is chock full of little goodies, complete with the raw egg yolk that binds it together after mixing. You usually find branches in department stores. If you can’t make it to Jeonju, try it here. 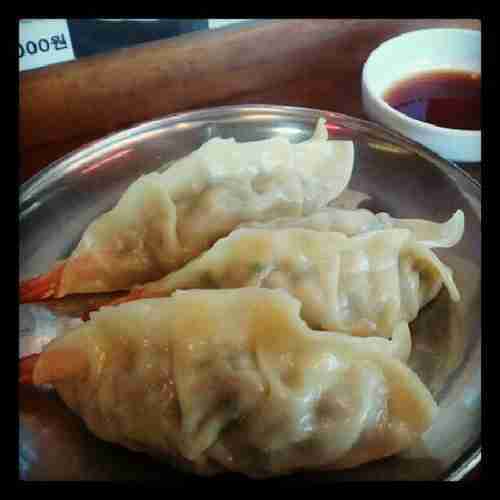 Bukchon Mandu makes their dumplings fresh. You can see them wrapping them in the open window where people pick them up to eat on the street or take home. Their Manduguk (mandu soup) warms you up and fills you up for the afternoon. Make sure to get some of those Sae-oo Mandu (Shrimp Mandu, pictured above). Likely, you’ll get more.

And these either suck the soul out of Korean food or are just poorly executed.

Oh, the things that continue to be wrong with this concept! I had already told you the story on how CJ approached me and a few others to help organize market testing with westerners for a bibimbap concept they were planning to take overseas. The original restaurant was Cafe Sobahn, which was pretty cool. The sprouts they grew hydroponically in the shop. You could see them. After trying and rating different dishes, they ended the testing by saying, “We’re thinking of going with the name Bibigo. What do you think of that name?” The group unanimously said it was a horrible name. The CJ manager took the results to his superiors. The superiors looked at it and tossed the results away, along with Cafe Sobahn itself. They didn’t fit with what they planned.

The result has been one of many money pits for the CJ conglomerate. The only reason the Bibigo branches in the U.S. and even in Seoul have stayed afloat is that CJ’s deep pockets are patching the holes. They use the franchise to boast to the Korean public that they’re spreading Korean cuisine. But few have asked them whatever happened to their prediction to have many more restaurants open than they have now. It’s a money suck. The exec in charge of this has famously compared herself to Steve Jobs, which is her excuse for not paying attention to market research. She doesn’t realize that Steve Jobs could get away with it because–he was Steve jobs. Every move they have done has been crass and out of touch with the market. But hey! They had Psy!

(What’s funny is that Psy was the face for Nolboo before he came out with Gangnam Style.) Since I first posted about this, they had a disaster of a restaurant in London, and the chain is dying out. But now they’re known for their frozen mandu. 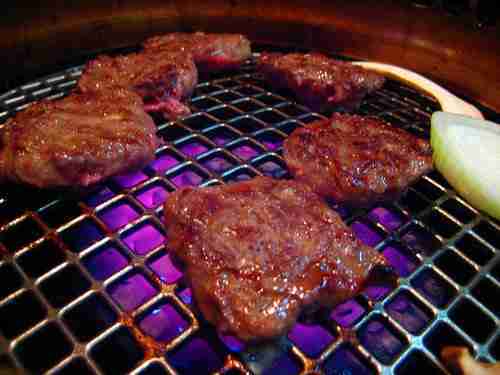 Korea’s answer to TGI McChilibee’s. They try to do the chain casual dining fern bar concept a la Outback. This could have worked. Unfortunately, like so many prepped up Korean endeavors, they somehow surgically removed all the fun, flavor, and excitement of Korean BBQ while upping the price, pairing it with Yellow Tail Merlot. 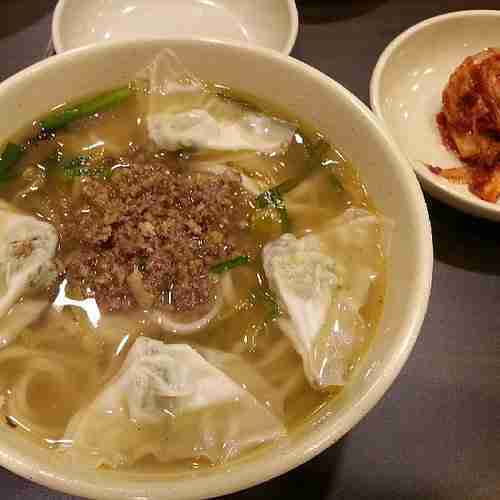 Oh, I’m going to get my ass chewed for this one. But I seriously don’t see what the hype is about this beyond being an institution. It’s like how I don’t get The Varsity in Atlanta. Everyone says you have to go there, but unless you’re sentimental for it, it is disappointing. I’ll say this, the broth in the Kalguksu is fine. But that’s about it. The meat is grisly and low quality. The dumplings are just the same as you’d get anywhere else. And that kimchi–it’s god awful! It’s like they put no jeotgal in it and just doused it in raw garlic and gochugaru. You only eat the kimchi because there’s no other option. There are many much better kalguksu joints in Korea, like Hwangsaengga Kalguksu in Bukchon. Myeong-dong Gyoja is just hype for tourists. 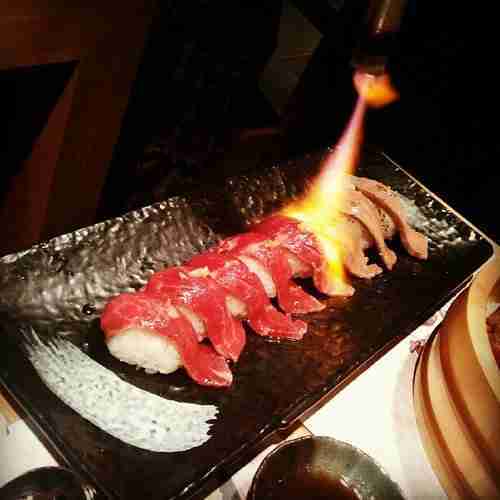 If you’re easily impressed by gimmicks, this is your place. Their fire beef sushi isn’t bad. But the namesake noodles are dull, dull, dull. It should be a blinking warning when a restaurant imprints their logo on the egg in your bowl. 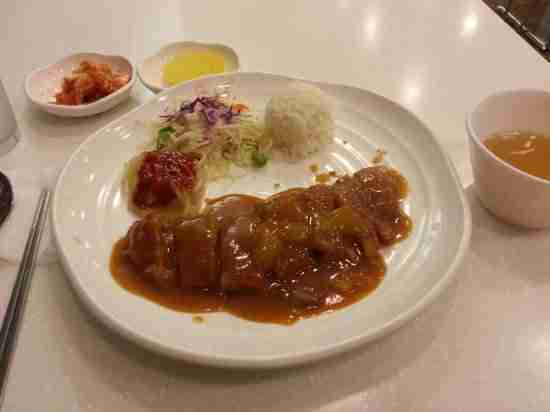 Just ralph on my plate and serve it with rice, why don’t ya! They supposedly specialize in mandu. It’s in their freakin’ name! The frozen mandu given out as free samples at E-Mart are better. Grainy. Mealy. Tasteless. So you know it’s only downhill when you try their non-mandu items. What great (or bad) Korean food franchises am I leaving out? Say so in the comments.