Since 2010 seems to be the year of the Korean taco truck, I decided to bring this popular Korean fusion food to you. I’m serving up a So-Cal  vs. Nor-Cal face off between two very different versions.

California is Korean fusion cooking central, in a manner of speaking. According to the 2007 U.S. Census, more than 322,628 native Koreans make California their home. It has the largest number of Korean immigrants of any in the U.S., even Hawaii. 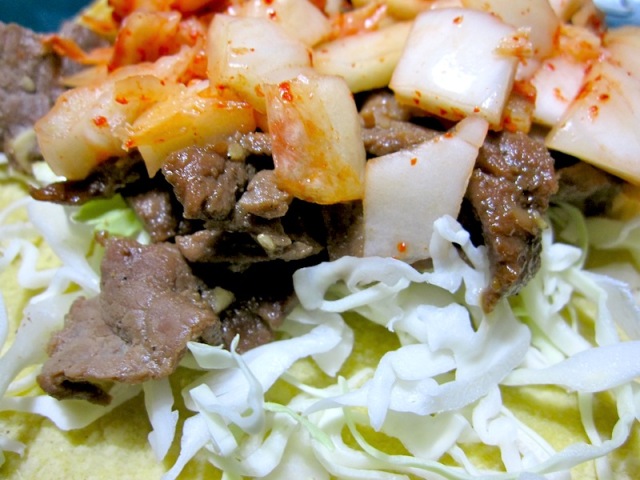 First off the grill is a version inspired by Roy Choi’s famous Kogi taco truck. The Kogi Korean taco was born in Southern California, with a strong Hispanic influence. A warm corn tortilla is topped with bulgogi (savory-sweet grilled beef), shredded cabbage and the spiciest kimchi you can find.

The key to this recipe is the bulgogi marinade. 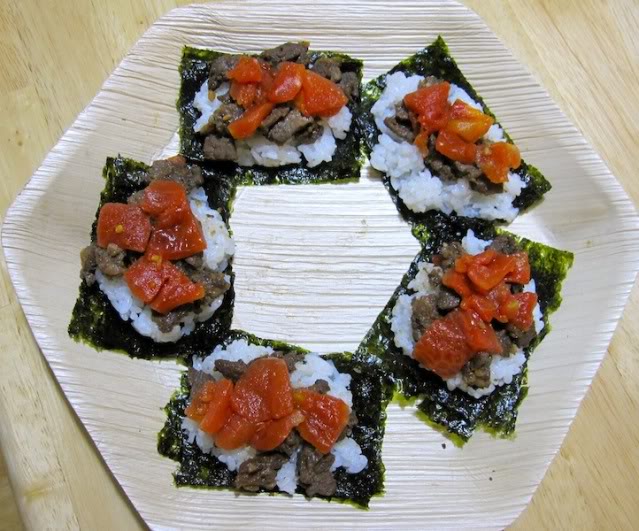 Another Korean taco style hails from San Francisco, which has over 150 years of Chinese, Japanese and Korean immigrant history going back to the earliest days of statehood. Many of the leaders of Korea’s independence movement used San Francisco as their base of operations during the Japanese occupation.

The Namu-style Korean taco is a nori — kim, in Korean — “taco shell” with a bit of sushi rice, bulgogi or boneless kalbi (grilled ribs) and kimchi on top. It’s more of an appetizer than a meal, but it packs a lot of flavor. For the seaweed used for the “shell,” I used Annie Chun’s Roasted Seaweed Snacks, which I found during my futile search for locally sourced gochujang sauce. I have both the wasabi- and sesame flavored-wraps and used one of each for these tacos.

Asian grocery stores sell small sheets of kim. Koreans often wrap them around a small bite of rice and pop the package into their mouths, eat the seaweed sheets by themselves or cut them into small strips to sprinkle on bibimbap (mixture of ingredients such as vegetables, meat and an egg with rice).

The most complicated part of this recipe is the sushi rice. Here are the basics.

Which version do you prefer? Tell us in the comments below.

* Kogi style tacos are in no way affiliated with the Kogi Taco Truck, just inspired by it.