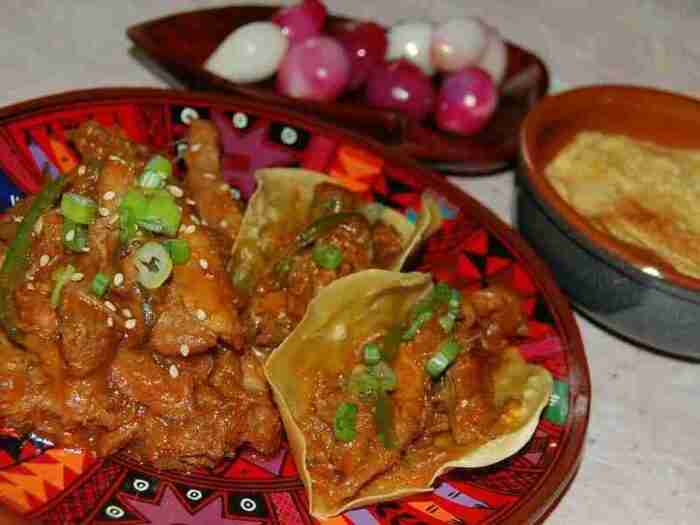 My father is coming.  After moving back to Korea last year, my father’s visiting for a few days.  My mind is going in all directions and the first thing I think of is – I gotta clean out my fridge.

Sometimes I end up with random stuff, other times I buy things to poke around and figure out what to do with them on top of my usual grocery items and leftovers after various cooking trials.  With a bit of exaggeration, my small kitchen is stocked to feed everyone in my apartment building for a week at any given point.

Just to minimize the moment of sheer shock when he opens my refrigerator, I started the process of cleaning it out.  The first one was pickling pearl onions, then baking potatoes and eggs that didn’t work out (but still made a good lunch).  This time is turkey tacos, an idea I got from the Beer-Braised Turkey Tacos Recipe from the magazine Food & Wine.  The innocent looking turkey tacos above have hodgepodge of ingredients from my refrigerator, including bekseju (백세주), gochujang (고추장) and doenjang (된장) – which, combined together, help bring out an earthy, warm flavor of the familiar winter meat dish, yet something that makes you wonder what else is in this…?

To make turkey tacos for 2) After sauteing 1 chopped onion and 3 cloves of sliced garlic, add a defrosted turkey leg and a thigh along with 1/2 bottle of bekseju (백세주), a Korean rice wine.*  Reduce until the liquid is just covering the bottom of the pot.  Take out the turkey meat and pull off the meat from the bones.  Reserve the meat and discard the bones.  Add about 3 cups of stock or water and a tablespoon of doenjang (된장; fermented bean paste or miso) and 2 tablespoons of gochujang (고추장; Korean hot pepper paste).  Bring up to a boil.  Add back the turkey meat, a tablespoon of grated ginger and a seeded, sliced jalapeno.  Simmer over low heat for about an hour until the meat is tender and the liquid is reduced and thickened to your desired consistency.  Mix in enoki mushrooms (팽이버섯; paeng e beo seot) and chopped scallions right before removing from heat.  Salt is not necessary because there is enough in gochujang and doenjang.

Warm up wonton wrappers over low heat just until soft and turning translucent on a pan coated lightly with oil.  Make sure to shape them like shells as the wrappers tend to get crispy soon after taking off from heat.

The recipe is purely based on the available items in my refrigerator.  As with recipes in general, it is up for revision based on what you have in your own refrigerator.

* I wanted to test it for myself what I heard about leftover soju and bekseju.  Usually, these can’t be saved for later because they go flat once opened.  One way to resolve this is to freeze the leftover then defrost it in the refrigerator before drinking it again.  And now I know that at least for bekseju, it works.