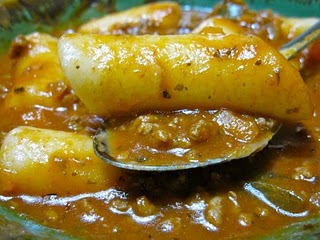 Today’s tteokbokki recipe keeps us on the Italian peninsula by using Bologna’s famous sauce as the wardrobe for the tteok noodles.

When I lived in Korea, I did not know much about cooking. My cooking skills was limited to grilled cheese sandwiches and the occasional one pot meal, usually featuring a couple of chicken breasts thrown in a rice cooker with 2 cups of rice mixed with random spices thrown in for flavor.

The last 3 months or so I lived in Korea, we had a Korean woman who made lunch for us every day. When she wasn’t making Korean foods like japchae, she was making some kind of Korean fusion recipe (with interesting results). When she made this sauce for us, I though the diced carrots were a Korean innovation. It wasn’t until much later that I discovered Spaghetti Bolognese and realized why the carrots were there. Our Korean cook was right, I was the babo.

There’s only difference between this recipe and hers. I remember our Korean cooks version was a bit sweeter (maybe because she didn’t put wine in her sauce) than the version I have here.  Hubby liked mine better.

There’s only one difference between this recipe and hers. I remember our Korean cook’s version was a bit sweeter — maybe because she didn’t put wine in her sauce — than the version I have here. Hubby liked mine better though.

The leftover sauce — if there is any — will match well with any pasta, particularly penne.