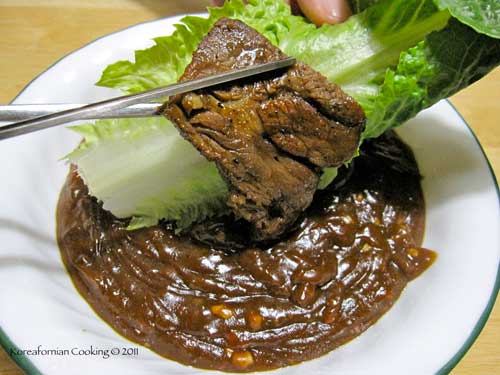 On a barbecue blog I found a recipe for Korean Satay Sauce. It’s a dipping sauce combining marinade for the popular Korean grilled beef dish 갈비 kalbi, peanut butter and water.
Satay is a favorite marinated skewered meat dish of Southeast Asia, and it’s usually paired with a peanut sauce.

“Korean Satay Sauce” is a curious recipe name, because a sauce Koreans commonly use with meat is 쌈장 ssamjang. The word literally means a jang, or sauce, for ssam, or meat wrapped in a sauce-slathered leaf of lettuce or 깻닢 kkaenip (perilla). A common ssamjang is a greatest-hits sauce with 된장doenjang (fermented soybean paste), 고추장 gochujang (spicy red pepper sauce), sesame oil, onion, garlic and green onions.

Peanut Ssamjang is a sanitary, economical and delicious way to use up the rest of your 갈비 kalbi or 불고기 bulgogi marinade (such as Korean drama superstar Bae Yong Joon’s) flavoring the raw meat. It’s a shame to put all the work on the marinade from scratch and then dumping most of it down the drain because it’s been in contact with raw beef. 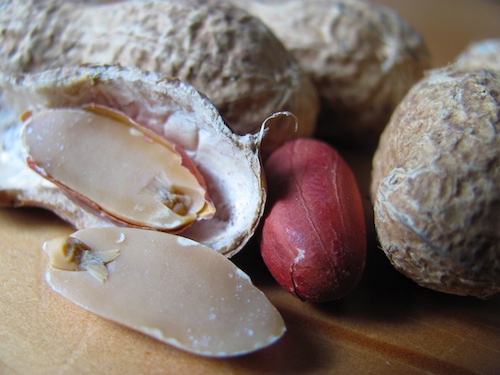 Koreans don’t have a long-term relationship with peanuts or peanut butter, but you can marry Korean spiciness and your favorite peanut butter. (photo by Michaela Kobyakov on Stock.xchng via Creative Commons license) 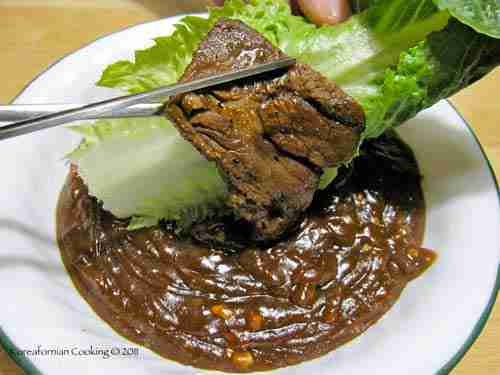