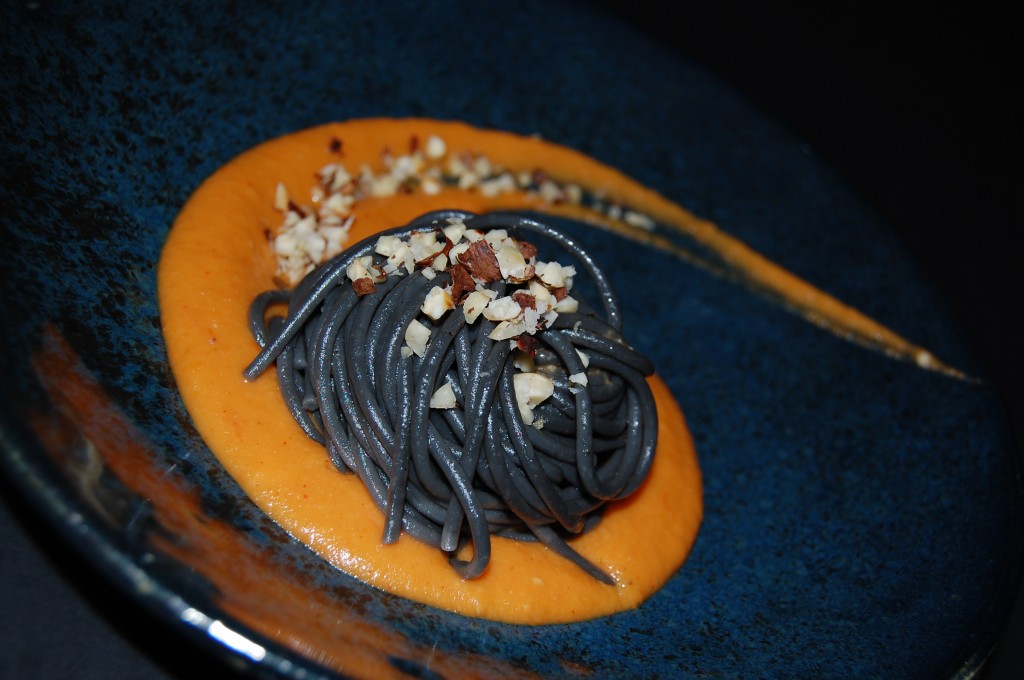 Taro (토란; to ran) is a starchy, high-fiber root vegetable, which has a creamy texture that can be incorporated into a sauce.  An added bonus is that the creaminess from taro roots is not accompanied by high fat content.  The small variety is used to make earthy, comforting taro soup (토란탕; to ran tang) in Korea, often with perilla seed puree, popular in the fall/winter time.  It’s also shown up in doenjang jjigae (된장찌개; bean paste stew with tofu and vegetables) on my family dinner table, looking very similar to potato pieces.  It always tricked my unsuspecting eyes, but then, its familiar creaminess was easily recognizable when I took a bite.

The cleaning of taro root in the beginning takes some effort, which requires peeling with gloves on as the peel can irritate skin, then washing off the slimy outer layer in cold water (some say salt and flour in cold water work better).  I also just learned that raw taro root is toxic due to calcium oxalate, which is destroyed by cooking.  As far as I remember, I’ve never ventured to eat it raw.  As far as I remember.

Creamy Taro Tomato Sauce) To make about 2 cups of the sauce, start by sautéing 1/2 sliced onion, 3 cloves of sliced garlic, a pinch of salt, in 2 tablespoons (TBSP) of olive oil over low heat.  Once the onion and garlic slices become translucent, add 1 cup of peeled, sliced taro (about 3 small taro roots). Cook for another 3 minutes and stir often as starch from sliced taros is released.   Add 1/2 cup of white wine and reduce until very little liquid is left.  Add 2 cups of sliced tomatoes and 1 teaspoon of dry oregano or Italian seasoning.  Simmer over low heat until everything is completely soft.

Optional) Here comes my weakness and affection for gochujang (고추장; Korean hot pepper paste) – stir in 1 TBSP of gochujang for some heat.

Puree the sauce in a blender for a smooth creamy consistency.  Taste and adjust seasoning.

I usually freeze some of the sauce for another time when I want some creamy sauce to go with a quick pasta dinner.

If you just want simple, fresh tomato sauce, you can ignore the taro part. Without taro, it’s still a lively tomato sauce great for pasta. Taro adds savory sweetness with a creamy texture.

As the taro season is ending (as defined in Korea), I am finally writing about the sauce I’ve made a few times in the last couple of months – although in my defense, I just got the latest batch from Chinatown last week.  So I’d like to think this post is like a fashion catalog shoot, being 6 months ahead of the next season.