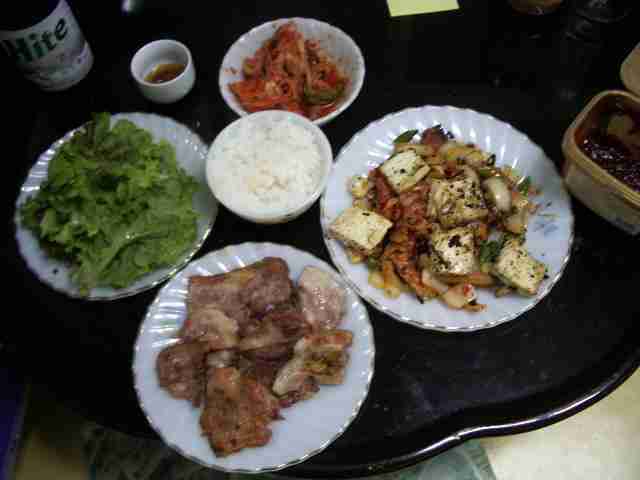 I have mentioned samgyeopsal many times in the past. It’s a simple concept that has become one of my favorite foods. Samgyeopsal is basically bacon, pork belly, without curing. It’s fresh pork with a great balance of fat and lean.

I found out recently part of the reason it’s called samgyeopsal. The ‘sam’ stands for ‘three,’ as in three strips of fat and lean. At restaurants and butchers, you can find the more expensive ogyeopsal. The ‘o’ means it’s five layers. 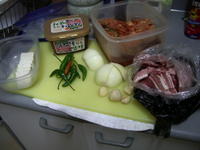 In restaurants and homes, samgyeopsal is cooked at the table on a special pan designed to let the fat run off the sides. I like to put vegetables on this fat stream on the pan to give them that extra flavor. Until I actually go out and get a real samgyeopsal pan and a portable gas burner, I make it on the stove in a regular frying pan. 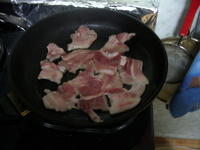 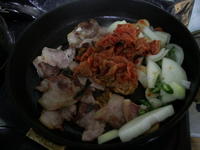 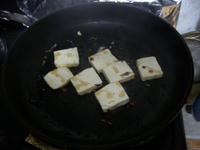 I then add thickly sliced onions, kimchi, peppers, and whatever else I want to throw in. Tonight, I had some leftover tofu, so I fried it with some sesame oil. It’s a bit of a trick to handle samgyeopsal in a frying pan without it getting too greasy. I just picked them out one-by-one with tongs and let them drain before serving them. Being bacon, this meal takes very little time to cook — as long as it takes to cook breakfast.

Resist the Western urge to season the meat while cooking. It kills its sweetness and makes it too salty when combined with kimchi and other sauces. A sauce I like to make that is served in restaurants is a simple combination of sesame oil blended with salt and freshly cracked black pepper.

Samgyeopsal, like other grilled Korean foods, is eaten like fajitas at your local T.G.I. McChilibee’s. Instead of tortillas, we wrap them in lettuce leaves and use kimchi, garlic, onions, rice — whatever toppings we want. My favorite is a special paste made for samgyeopsal out of fermented soybeans and red peppers mixed with other ingredients called ‘Samgyeopsal Ssamjang.’ It’s ripe and stinky and so good, I have actually eaten it off my finger like peanut butter. 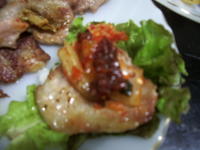