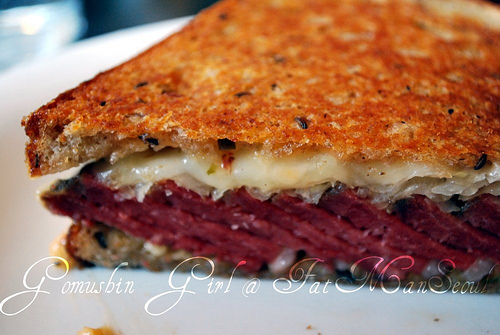 I came across this picture in Fatman Seoul’s Flickr account.  Since then, I haven’t been able to get Reuben sandwiches out of my head.

The trouble is that it consists mostly of ingredients that are impossible to find in Korea without a good bit of travel and expense.  I’m always open to compromise, and you have to be when you are in a different country.  The world’s best foods have come from immigrants making compromises and adapting what they could with local ingredients.

I likely won’t find Jewish rye bread, but Paris Baguette has been diversifying its basic bread stocks and has put out some ample bodied loaves–especially the more upscale locations.  I can make Russian dressing at home or use Thousand Island for the sauce.

The cheese may be the biggest compromise.  Unless someone could point me to a source, Swiss cheese and its brethren are too hard to find and expensive to justify throwing onto a sandwich.  I may have to go for something that melts well but has some bite, like Pepper Jack.

That leaves me with corned beef and sauerkraut.  I know that Chef Meili’s Delicatessen stocks sauerkraut that he has made himself, and jars pop up at the more upscale department stores.  Yet I have read a good bit about how easy it is to make your own.  I tried to make some last year, but I used a traditional Korean crock for it, and it got exposed to too much air.  This time I’m using zipper bags and squeezing the air out of them, along with weighing it down with some of my weights.  Hey, if I’m not working out I may as well get some use out of them.

I’m also attempting to make my own corned beef.  The wave of American beef being snatched up by consumers has put pressure on the price of beef in general.  I had found out recently that the Korean cut of beef called 양지 yangji is pretty much a brisket.  I headed down to my local E-Mart this past Sunday to collect the ingredients, since I saw a good stack of American yangji in the frozen beef section.

Yet E-Mart’s business model works like this: if Joe finds something he really likes let’s not stock it.

There were no American yangjis there.  It forced me to take a look at the Korean Hanu yangji.  You know what?  It wasn’t so bad of a price.  I got a 600-gram chunk to experiment with.

I had searched the web for corned beef techniques and decided on a combination of a few with some tiny little additions of my own.  The big item I was missing was cloves–the spice, not the cigarette.  My memory of corned beef told me that cloves were an essential ingredient.  I couldn’t do with out it.  I had just run out of my stock–a supply I had brought with me from America in 2004–last month while making spiced tea.  You just can’t find cloves at Korean stores.

I took a trip to Ansan Asia Town this past Saturday on a hunt for cloves.   There are swaths of international markets catering to Southeast Asians, but none of them had cloves.  (BTW–I noticed a Thai restaurant is finally opening down there.) Yet my trusty old Pakistani shop carried great bags of ’em.  The guys hanging around the counter thought it was cool that a Westerner was buying a bag of cloves for cooking.

Sunday evening, with all ingredients assembled, I started on it.

I cleaned the cabbage and sliced it really thinly.  I’m sure you could run it through a grater too.  In a clean bowl, I rubbed the salt into it vigorously.  I then put it all in a big zipper bag.  Rolled it up, squeezing as much air out as I could.  The salt had already started to leech water out of the cabbage.  After it was rolled up tightly, I put it in a shallow pan, put a weight on it and stuck it outside on the balcony inside a Costco shopping bag to keep out the sunlight.  It’s pretty chilly out there these days, so it may be the optimum place for slow fermentation.

NOTE: I didn’t put saltpeter in it, which is what the big butchers do because, well, it’s hard to find, it’s not really healthy, and many homemade corned beef sites said it wasn’t necessary.  It just added that pink color.

I crushed a lot of the spices and the garlic in the mortar.  I mixed the garlic, salt, herbs and spices together and rubbed them thoroughly on the beef.  I put the beef in a large zipper bag and poured the water and vinegar in there.  As with the sauerkraut, I rolled the bag up to push out the air and zipped it tightly.  I put it in a bowl with a weight on top and placed it all in the refrigerator.

This process for the sauerkraut and corned beef will take around 7-10 days.  I plan to try them out soon after January 21st.  As things progress, I need to squeeze the air out of the sauerkraut as it ferments and turn the corned beef over every couple of days.

I checked the sauerkraut this morning, Wednesday the 13th.  It already has some odor.  Not unpleasant.  Sort of kimchi-like.  I squeezed out some air that accrued.  I turn the beef over tomorrow.

I’ll keep this post updated as the Great Reuben Project continues.  Alas, I still haven’t gotten a replacement camera since it broke this week, but I’m getting closer.

Wednesday, January 14th: A few more air bubbles appeared in the sauerkraut.  I squeezed them out.  Already, it’s smelling a little bit like sauerkraut.  It’s produced a lot of liquid.  I turned the corned beef.  It’s already brown on the outside and feels tenderized, like it’ll fall apart if I mess with it too much.  Smells spicy and garlicky.

Friday, January 16th: Man, the cabbage released a lot of water!  It’s still crispy, I can feel from the outside.  I turned the corned beef.  It’s getting flatter.  Eun Jeong has helped the pressing by putting a bag of apples on top.

Monday, January 19th: The cabbage is starting to look like sauerkraut.  Thanks to Daniel Gray of Seoul Eats, I now have a camera.  Here is a pictorial. 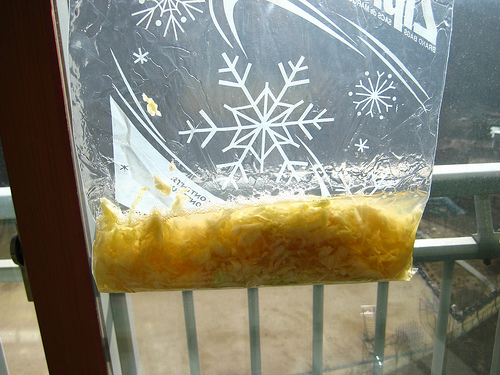 You see?  Lots of water has accumulated. 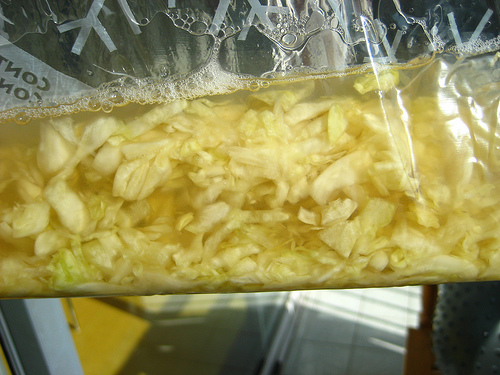 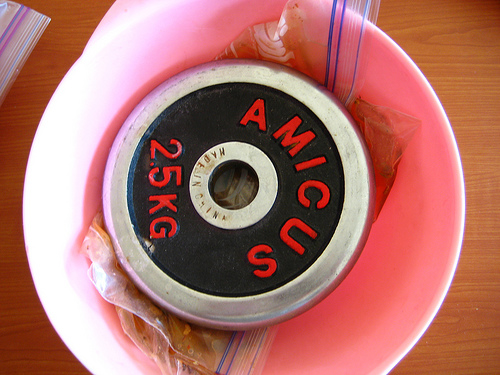 Yes!  Found a use for my weights. 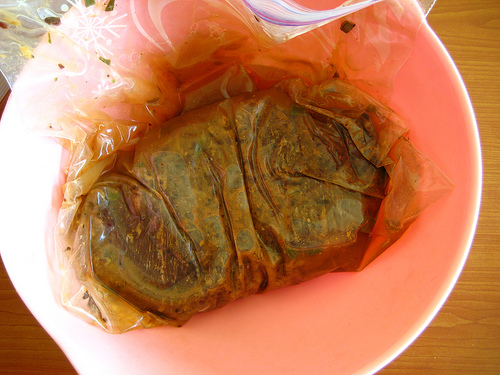 It doesn’t look like much.  Kinda looks like a stool sample.  But you weren’t in the room.  The smell will make you salivate buckets.  The beef has turned brown, as expected, since I didn’t use saltpeter or other harsh preservatives.  It’s much flatter and compact.  It feels more tender. 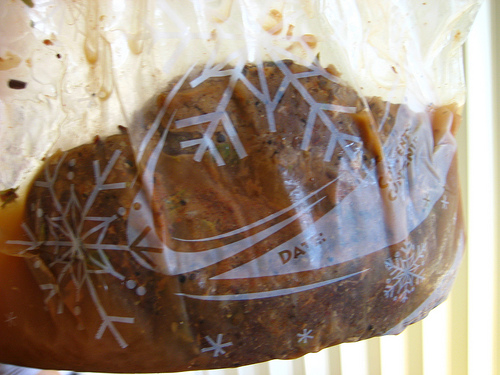 You can see the big spices and herbs.

Hold on… smelling my fingers now.  Ooh, they smell SO GOOD!!!

I know we’re past the ten day mark, but I have been too busy to have the time to prep everything.  A couple of days ago, I moved the sauerkraut in from the balcony and put it in a more temperate environment in the kitchen.  I was worried that the weather has been so cold that little fermentation was going on.  The cabbage still smelled fresh.  After a few days in the kitchen, it actually smells like sauerkraut now.

I turned the beef one last time.  It’s a flat mo’ fo’.  It looks ready.  I hope to test it all out this weekend.