I think I’m the last K-blogger to go to High Street Market. I was in Itaewon heading to Korean class when I saw the editor for 10 Magazine standing outside the door of the building (I have classes in the same building as the 10 office). He had a long narrow package wrapped in white paper.

He unwrapped it to reveal a beautiful sandwich on a golden baguette.

“It’s at the High Street Market, just a few doors down that way. You haven’t been yet?”

People say that phrase to me regularly, as if food writers instantly check out each place as it opens and have psychic powers to know where every good restaurant is.

I looked down at the last bite of sad overpriced Paris Baguette sandwich I was stuffing in my face on the way to class. I really should see if this place lives up to the hype.

This isn’t a review of HSM. I haven’t taken any pics of the Whole Foods mimicking interior. This is just a report back that it’s pretty good there. I don’t want to hype it too much because people are always let down when you do that. I’ll just say that I may be a regular there.

For one thing, those sandwiches are just W7,000–much less than the equivalent at the western chain sandwich shops, and there are no unfortunate surprises (ham and cheese with strawberries) that you get at Korean bakeries. They had three sandwiches available that day, and I got the roast beef. It came with lettuce, tomato, jalapenos, horseradish and mustard. The mustard was a bit heavy, but that was a satisfying sandwich.

The items in the freezer and refrigerator cases are what makes HMS stand out from the other import markets. They have corned beef and pastrami, along with western cuts of meat at competitive prices. Also breakfast sausage (links and patties), thick cuts of steak and even a few packs of foie gras. Many of the cuts were butchered inside Korea and were merely vacuum packed and stamped for HMS, so they were fresh. What caught my eye was a pair of thick cut on-the-bone pork chops for around W6,000. I remembered Paul Ajosshi saying he got some and loved them.

The freezer case had some frozen vegetables that I couldn’t find in many places. I got a small package of peas and took them home.

For lunch today, I simply and liberally seasoned the pork chops with salt and pepper, seared them on both sides and finished them in the oven. I steamed the peas and some frozen corn I had gotten at Home Plus and served them with some of that rich homemade butter. After resting the pork chop, I set it down on a layer of EJ’s homemade apple jam with a dash of cinnamon. 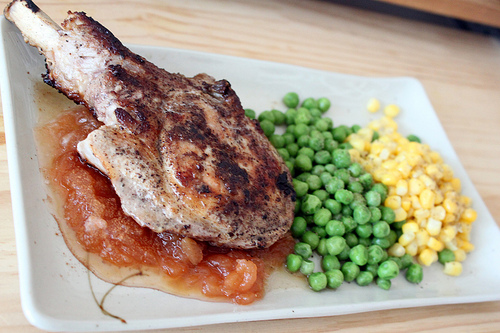 I never was a pork chop person until I came to Korea. But Korean pork just has so much flavor. I’m gonna do this more often. I gnawed on that bone.

High Street Market is across the street from Marakech Night, going towards Hannam-dong from Itaewon Station. I hope this place sticks around for a while.